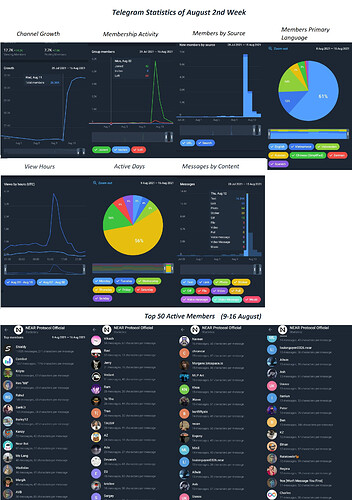 Each week I will post these charts and compare with previous ones. Top Active Members are just posted for the event [PROPOSAL ]Telegram Community Monthly Rewards

As we can see the channel growth, members activity, message count has spiked due to Ref/Skyward Quiz event that started on 12th of August.

-Members Primary Language data gives us idea about the Locations(Countries) are currently participating.

We all know this metric is not location based. It counts the primary language being used by the user on his device. Even though this data gives us some idea about in which countries we need to raise Near Ecosystem awareness and boost marketing.

We know that some of top countries that use Crypto like Nigeria, Philippines, India uses English as Official language so we can include these countries in 61% share but we definitely need more marketing campaigns for Turkey, Latin American and European countries. According to a data Turkey and Peru is in top 5 in Cryptocurrency usage!

That’s all for this week!