Welcome to the Kitchen Guild!

Kitchen Guild was officially established on 09/09/2021

Guild name: Kitchen Guild Guild Leader(s): [@lolson_tg @baxoff] Guild SputnikDAO Address: none Guild Location (if focused on specific geography): International Guild Details: Professional community of bloggers who are ready to promote Near Protocol on their resources. Deadline for submitting reports: 28-31 day of each month. Bloggers - in our post, we use this concept to refer to influencers or content authors not only in the form of blogs (websites, medium and other resources) but also Yo…

But we did officially start our activities on 08.09.2021, it was on this day that we hired our first blogger as part of the Kitchen Guild. The report will be provided from this day, this is not a full and test month, so the indicators are reduced by about 20%, since the hiring of the next bloggers took from 5 to 10 days. The full composition was formed on 15.09.2021

Kitchen Guild currently has 3 full-time bloggers and one more non-permanent blogger and will be recruited into the Kitchen Guild core team in October as he didn’t have time to pass the test by September 15th.

We mentioned in the Creation topic that our bloggers operate as part of the Degen Army. This was done so that we could start our activities. We were not sure that we would be able to receive funding from the Marketing DAO, so we resorted to the help of Degen Army to provide our bloggers with financial flows of 300 NEAR for the first month.

We are very grateful to Degen Army, and in particular @rimberjack and @Ozymandius for this opportunity and have done work for them, which will be paid from the Degen Army fund. But it is important to understand that this is only a one-time action, since October 2021, the Kitchen Guild will act as an independent guild and will not request funding from the Degen Army.

The funding request from Marketing DAO was made taking into account that the first month part of the payment for the work of bloggers in the Kitchen Guild will be paid from the Degens Army fund. This will allow us to hire two more bloggers for the next month with the money saved. Thus, we plan that the composition of the Kitchen Guild will be increased to 5 people during October.

What did we manage to do in September? In fact (3 weeks).

During this time, we created 39 Twitter posts, 28 YouTube videos, 16 Telegram posts, and daily Twitch streams with price analysis and an overview of the Near Protocol ecosystem.

Let’s take a look at our overall performance. We took content that is about Near or involving Near Protocol.

From general statistics, I propose to go directly to bloggers.

This blogger is the largest representative of the Kitchen Guild. He occupies the first line of Twitch in France on the topic of cryptocurrencies. We have worked a lot with him this month and have created a large amount of content about Near Protocol.

The main sources are YouTube, Twitter, Telegram. The channel focuses on technical analysis and cryptocurrency news. Khalistas actively monitored Near Protocol in his videos and predicted price movements very accurately, which prompted his audience to become seriously interested in Near Protocol.

The interest from subs is proved by the fact of voting on Twitter in which Near was always in a leading position. 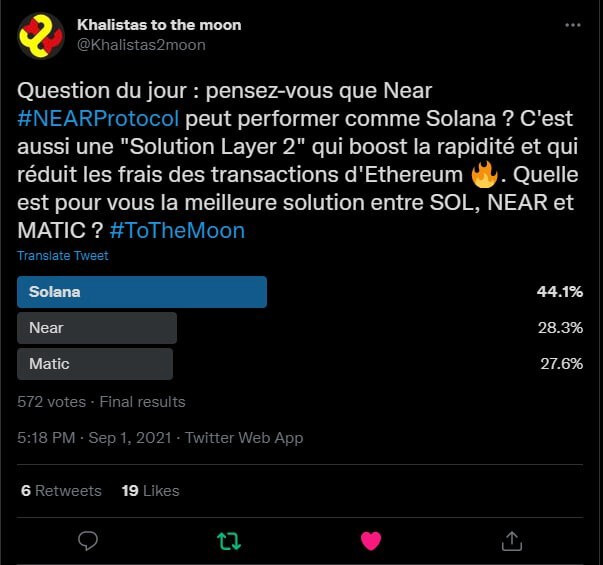 Khalistas is also actively developing the of NFT on Near Protocol. We created collabaration with one of the artists on MintBase. Khalistas also actively talked about Near on Twitch. He also added a donation button in Near. 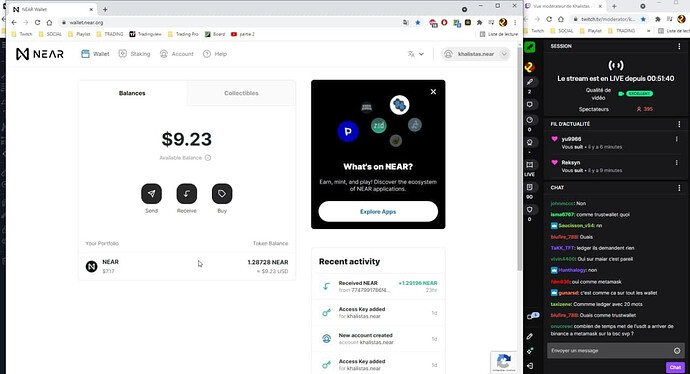 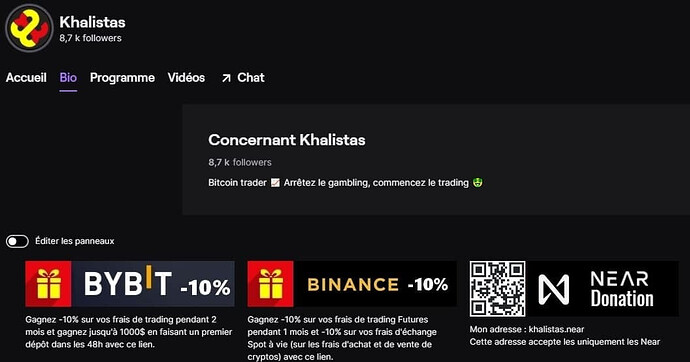 Here are its stats for September (only posts related to NEAR). 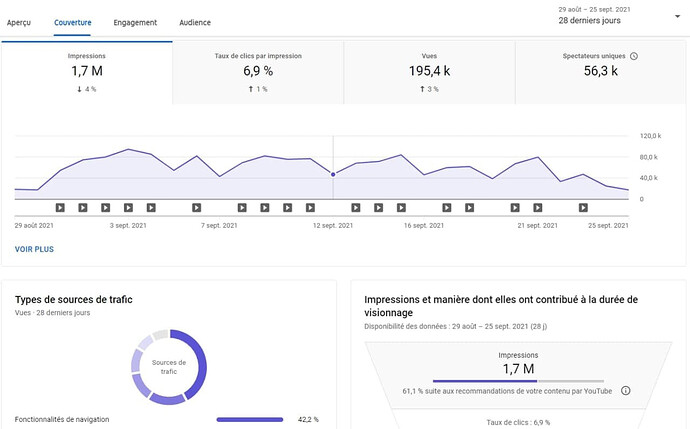 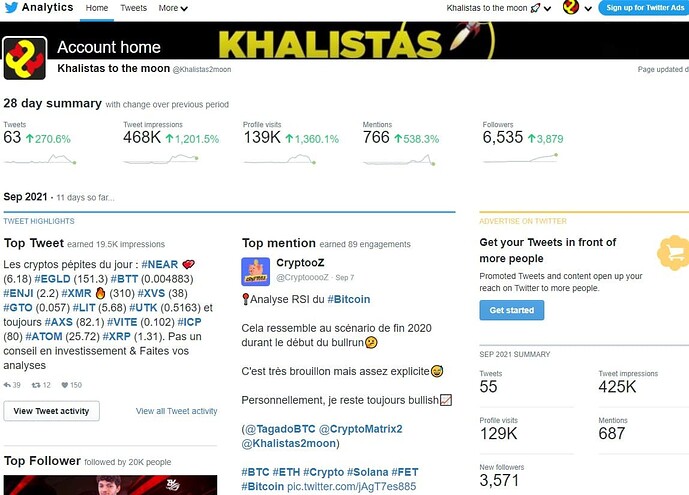 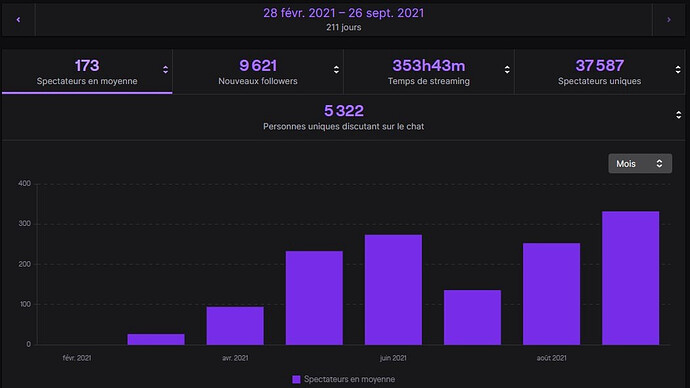 Currently working closely with Khalistas about NFT, we have several ideas to increase interest from artists and buyers based on Near Protocol. We will announce this a little later in October.

This is our first blogger and at the moment he is the smaller of our lineup. Despite the small number of views and activity on Twitter and YouTube, it has excellent chances to grow in the future.

Here are his figures for September (posts related to NEAR only).

We started working with these great guys on September 16th and in less than 2 weeks we achieved great results! The main resources for interacting with the audience: YouTube, Telegram Group / Chat, TikTok.

To date, 3 videos have been made about the Near ecosystem.

But that our main victory is different, by means of the Skyward referral link, it was calculated that the participants in the sale came from Procent and bought Paras token for a total amount of more than 18800 NEAR! 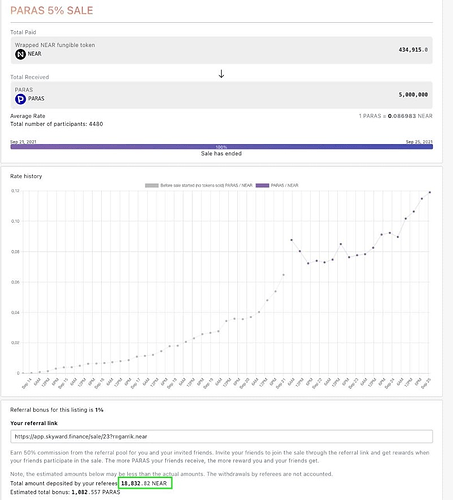 This is a tutorial about Rainbow Bridge, its features and how to exchange tokens using Ref Finance.

There are about 140 direct clicks on the links to Ref.Finance: A video was created about the top 5 best altcoins with their ecosystems, which included Near Protocol told the basic information about the project and its working ecosystem.

Procent creates major news posts within the Near ecosystem. 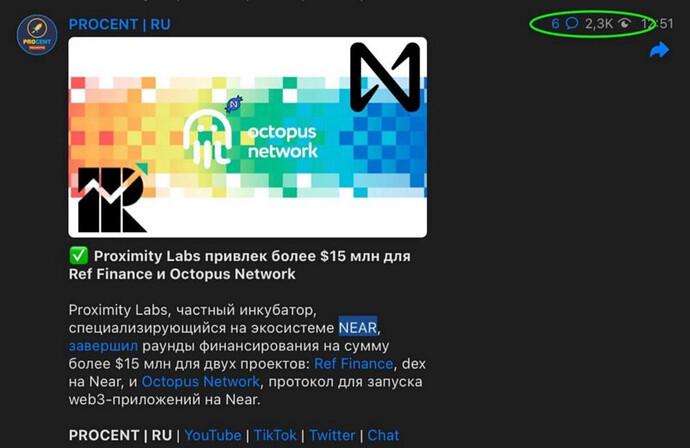 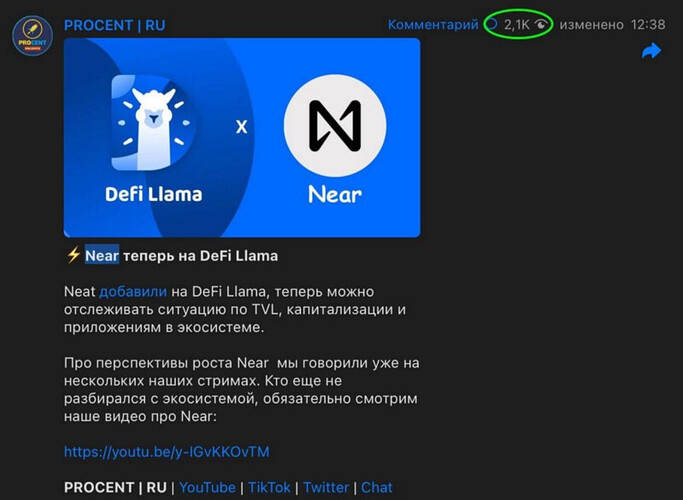 Procent also has a cryptocurrency TikTok (27 thousand subscribers) in which a video about Near Protocol will be released.

In just 3 days, 3 videos about Near Protocol were released, which collected a total of 9000 views and 400 likes.

The video talks about the benefits of the Near Protocol and how it is a promising ecosystem of the future. Our mission is to create a channel empowering Thai people to be responsible for their personal finance and bring forth their path to financial freedom. We believe the best way to get out of "ความจน" is by taking themself accountable, willing to learn... 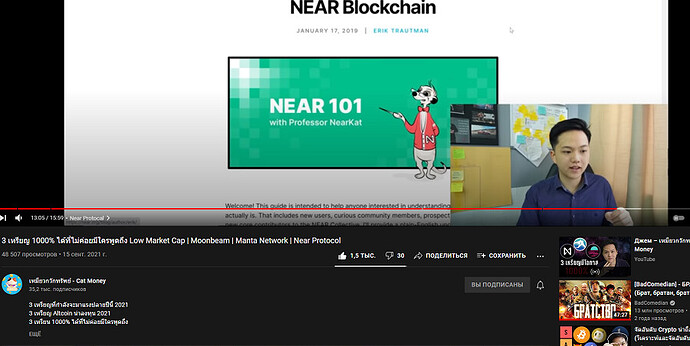 We negotiated with this guy for two weeks and after he released the first video about Near Protocol, it was decided to pay him for the work done from the budget, and in October to take him to the Kitchen Guild. Cat Money agrees to cooperate with us and Near Protocol, so this member of our system will be an irreplaceable link in our system next month.

Based on our activities during the creations of the Kitchen Guild, we can calculate the cost of viewing using our guild approaches.

Plus other an equally important activity

Moreover, in just a month of its existence, Kitchen Guild was able to attract >18,000 NEAR to Skyward IDO this is our main achievement!

The amount that will be spent immediately for September is 1920 NEAR (1320 + 600 guild management) out of 2800. The remaining amount of 880 NEAR will be distributed during October in the form of additional bonuses for AMA, conferences, recruitment of two Kitchen Guild members.

Further development of the Kitchen Guild. 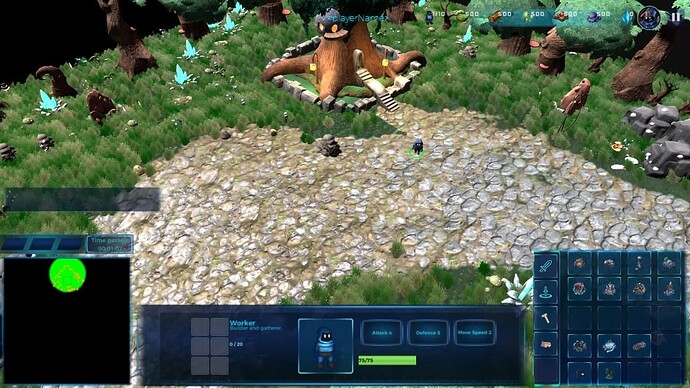 A big video about Near Protocol gaming is coming out this week. With detailed reviews of the best projects such as: Near Lands, Hash Rush and others. We got access to Hash Rush to test the gameplay. For each project there will be a full review with a demonstration of the gameplay + at the end of the week there will be a thematic stream on the development of the gaming industry on Near, where anyone can ask a question, the best questions will be voiced on the stream + will be rewarded in the video of Near tokens. In addition, a guest Alexander Hudzilin was invited to the stream, with whom the AMA will be held.

We consider this month a test month, we tested our principle of work and it showed itself in the best way, since we did not work for a full month, our indicators can be safely multiplied by 20%. We will prove to you that we are able to generate a lot more views and interactions with Near Protocol in the next 2 months, just give us time to strategize and perfect the approach

This month was the first in the work of the Kitchen Guild. We really hope that we have met your expectations. Perhaps our report looks a bit messy, but we need a little time and experience to fully balance our work and determine which type of reports is most suitable for Kitchen Guild.

I want to remind you that this is just the beginning, we are not going to stop!

This is sweet! Is the list of posts created exhaustive? Or are there others which were shared which have been omitted from the report?

We formed the report around September 26.

Some posts are not included in it. We’ll include them in the next report. We have attached all the posts and videos that were used in that calculation to a separate archive here