[Budget] September Report and Payout Request for the NEAR Degen Army

Report on Use of August Funding

The funds we received through the Degens DAO for August were used for 1) individual payout for each member, 2) incentives for top performers (claimed through the wallet “degenarmy.near” and transferred to the wallets of 8 members). The funds we requested for general expenses have not been claimed yet, but will be used to retroactively compensate expenses (such as Combot or a Twitter analytics tool) after evaluating their effectiveness.

At the end of August, we recruited several new members, who have now successfully passed their trial month. Several older members, who have either become inactive or failed to meet our standards, have been removed. In sum, the Degen Army has grown from 43 members last month to 49 members in total this month. The full list of members eligible for payout this month are here.

As the Army matures, we are increasingly pivoting our efforts from simple shills to more quality-driven content, and focusing on becoming KOLs for NEAR. Additionally, we are experimenting with diversification of our approach, as well as new means of outreach. Some of these new efforts can be seen in “[Qualitative] Contributions and Key Results.”

Under the leadership of @lolson_tg, a council member of the Degens DAO, the Degen Army has incubated the Kitchen Guild - a guild for collaboration with crypto influencers/youtubers to produce content about the NEAR ecosystem. The Kitchen Guild’s creation post can be read here.

In order to jumpstart the program and facilitate a smooth onboarding process (through a concrete guarantee of compensation for the recruited influencers), the Degen Army decided to partially subsidize the Kitchen Guild’s budget as an effort to incubate the Kitchen Guild until it becomes a fully-funded, autonomous guild. For this reason, a portion of our payout this month will go towards the Kitchen Guild; specifically, 300 NEAR each for three influencers (Khalistas, Procent, Crypto Maximalist). The results of the Kitchen Guild’s trial month can be seen here. From next month on, the Kitchen Guild will work as an independent entity, only requesting payout from the Marketing DAO.

The NEAR Degen Syndicate was originally a Youtube team created from 7 members of the Degen Army. As the NEAR Degen Syndicate expanded their operations, they have requested funding from the Marketing DAO with regard to the production of their Youtube videos (studio, equipment, production, advertisement etc). For this reason, the metrics concerning their Youtube channel (+ the relevant social media channels they use to promote it) for the month of September will be reflected in their report to the Marketing DAO. Only the Syndicate’s Twitter account - which does separate content such as tutorials or threads on NEAR ecosystem projects - will be reflected in the Degen Twitter metrics. The 7 members belonging to the Syndicate contribute to the Degen Army (1) through the Syndicate Twitter account, as well as (2) through their individual activity in the Degen Army, and to this extent fall under this month’s Degen payout.

On the one hand, the Degens operate in teams specializing in certain platforms, led by the four council members. On the other hand, the Degens also perform activities such as Telegram moderation, community building, beta testing, participation in NEAR events etc, which will be listed in the section, “[Qualitative] Contributions and Key Results.”

2)Interactions with ZeMoood + voting for NEAR in their TG group 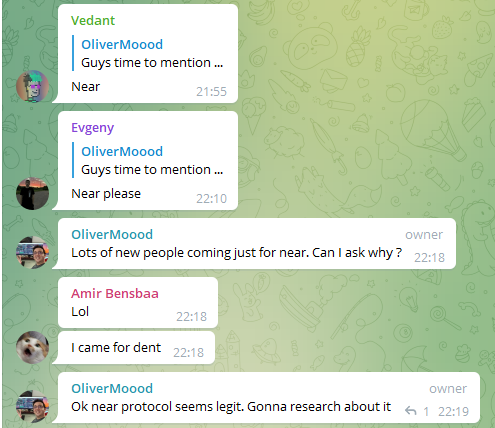 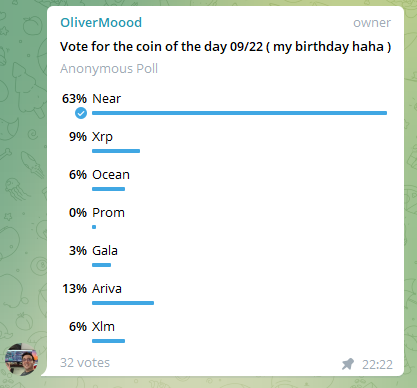 In sum, the total funding we request for September is 15,300 NEAR

Note on Form of Payment

While we recognize the recent adoption of the policy for community payouts, we operate with the understanding that this policy applies only to payouts directed to the community squad DAO or the other DAO verticals. The Degen Army receives funding through the Knights of Gondor DAO, which is the DAO responsible for the Degens and Warpspeed Guilds program, and we have not been made aware of any changes to our payout policy.

We’ll keep contributing to the NEAR ecosystem in as many ways as possible. Time to expand our reach. LFG!

Amazing.
Glad to be Part of Such an Amazing Group & Ecosystem.

@rimberjack thank you for your work! It is very nice to be part of such a highly qualified and friendly team! Everyone who is part of the Degen Army is in their place! I am sure that we will improve our quality and reach new horizons in the future!
Thank you for your great help in creating Kitchen Guild, nothing would have happened without you

Thanks for letting us know, @Zhunda. Let’s finalize this ahead for your next submission! @cryptocredit, we might need to file an additional payout request after the first one is approved for the remainder of this. Should we consider adding a buffer amount in case this happens again or if the NEAR price changes? CC: @David_NEAR @satojandro 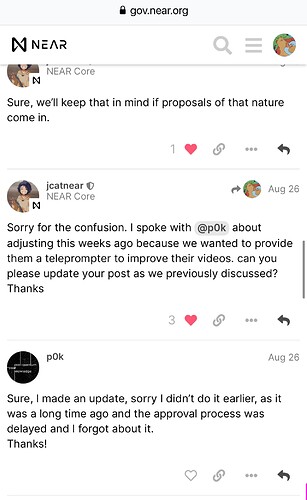 2)Could you please describe degens hiring process? I know I lot of active Near members which filled out your form, but didn’t get any responses.

Definitely, one of the way it’s be one of @p0k old friend.

I’m not sure that is fair. 2 new degens are poks friends (actor and operator assistant). Why? 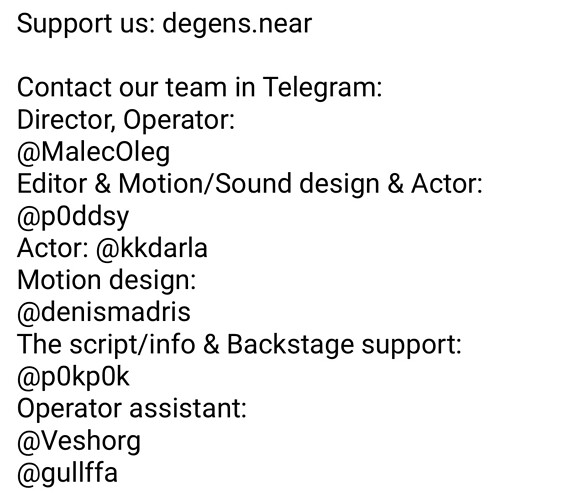 Hello,
and don’t worry so much, soon there will be a report on forum on every cent spent on the Syndicate project

And I do not think it is appropriate to constantly mention my personal relationship on the forum. Thanks.

Thank you for your concerns.

I believe p0k will soon post a forum post with all expenses of his guild…
& also its not appropriate to talk about someone’s personal relationships in forum posts.

We appreciate your feedback.

Sorry, I will remove this information.

Could you please describe hiring process for

Hello,
and don’t worry so much, soon there will be a report on forum on every cent spent on the Syndicate projec

It will be great. Now, we can compare your guild’s expenses / effective with other guilds (Stars, Kitchen) which do the same job.

Thank you for your concerns.

I believe p0k will soon post a forum post with all expenses of his guild…
& also its not appropriate to talk about someone’s personal relationships in forum posts.

We appreciate your feedback.

Thank You for your comment, but it’s not an answer on my question.

also its not appropriate to talk about someone’s

pOk wrote about it on telegram, not me. But, I deleted this information here anyway.

Where did you get information about it? He’s not in a syndicate and he has been in degens for a long time.

The decision to hire new degens is made jointly by the consuls after the interview.

which do the same job

This is not true. We make video content and all our expenses include the physical purchase of things and the Start and Kitchen guilds find bloggers and promote the near through advertising and work with them.

Sorry, I will remove this information.

May by you need to choose : be a degen or have your own guild and spend all your time there ? Don’t get me wrong guys, but it’s really hard be on 100% effective degen and work in guild.

Give a chance be a degen for other members in our large Near community.

Yes, may be @p0k is a great man, but it’s not a reason hire his friends in the Army and discriminate all others near Community members.

@Ozymandius first-of-all sorry for inappropriate memes. It took me time to realize how does it work here .

What do you think about it?

Where did you get information about it? He’s not in a syndicate and he has been in degens for a long time.

Sorry, I meant Kkdarla and other old friends in degens:

This is not true. We make video content and all our expenses include the physical purchase of things and the Start and Kitchen guilds find bloggers and promote the near through advertising and work with them.

Yes man, but may be it’s more effective to pay bloggers than create your own content ?
I think we both together think how to promote Near better and save money. Right?

Content creation is a long term perspective. If everyone is throwing money at bloggers, who will create the content?
And I believe that the development of the ecosystem and the promotion of NEAR should go in different directions and this will give the maximum effect.
Correct me if I’m wrong.

Yes, and expenses should have the same formula depend on KPI’s. And as a final result - self-sufficiency.

Hi Dacha! If I’m not mistaken, but Pok and his friends joined the Degans from the beginning of the creation of the Degans, each went through an interview separately, at that time Pok was not yet a general. Even more, some Pok’s friends have been kicked out of the Degans for poor work. We do not have such a thing that if a person is a friend of a general, he is immediately hired to the Degans or not kicked out for bad work.

Yes man, but may be it’s more effective to pay bloggers than create your own content ?
I think we both together think how to promote Near better and save money. Right?

I think we need to combine this. Bloggers will talk about the NEAR Protocol to their audience, and will bring new users to Near Community. In the meantime, the Syndicate team is creating news content about the NEAR Ecosystem for the community. Perhaps some bloggers will also shoot such content, but most likely they will not do it on an ongoing basis, and will not delve into the news of our ecosystem in detail.

Even more, some Pok’s friends have been kicked out of the Degans for poor work.

Thank you @rimberjack for such thorough report. I appreciate the details.

As we reach the 3rd month of our ‘experimental approach’ for ecosystem development initiatives, this month we will review the achievements and progress made during these 3 months and adjust going forward.

It is my aim to close October with clear guidelines on contributions, payouts and more importantly, acceptance criteria for quality output.

With 49 active members of the Degens, I expect the quantitive KPIs to be higher than what I see in this month’s report. I rather support a smaller group that is very focused on achieving greater impact.

I welcome the opportunity to meet with the Council members and discuss in more detail.