Over past few days we have seen a flame war on this forum and across few channels. I’m deeply sadden by what have happened and would like to remind everyone what we stand for and how we should be working with each other.

NEAR Ecosystem’s values are:

Which translates into some relevant to current situation ideas:

NEAR stands for iteration!

This really means we never going to be perfect, but we are going to continue improving.
I hope as a community we can learn from this situation and get better.

Conflict situations will continue arise - the more people in the community, the higher the stakes, the more conflicting situations will appear. Remember the values and ideas above, handle it well and let’s build the #FutureIsNear we all want to live.

Thank you for reminding us why we are here. I have learned a great deal about lots of things in the past days. I welcome this opportunity to learn and try new things to improve the way we communicate our work. These moments make us stronger and resilient.

Thanks for the reminder Ilia. Great source for reflection and growth.

Would you be able to expand on how the community should respond when there are gross violations of the etiquette? What we need right now are appropriate conflict resolution mechanisms.

The cancer that triggered some of the most prominent threads that had very serious defamatory allegations of wrongdoing is now spreading across the forum, sowing conflict and turning newcomers away. Just the most recent example I’ve come across from a recent proposal:

There have been repeated calls to ban some of the worst offending community members. And while the threads may ‘die away’ (discontent and frustration turns inwards) as people ‘do not defend themselves’ and ‘try not to escalate’, the community slowly dies as it becomes a breeding ground for toxicity dominated by rogue players.

Thank you for this post Illia, which aims to reconcile the community, not support just one opinion. I believe this is the right approach and I highly appreciate the opportunity to work under your leadership.

We are building a global ecosystem, we have grown and live in different environment so it’s clear that we will all have different mindsets and different workflows. Let’s not look for reasons to be offended at each other, let’s focus on our common goals and try to clarify the reasons for any incomprehensible behavior before making final conclusions and public statements. I am confident that we can find ways of proper cooperation between all of us. One way or another, we have no other choice, because we are building a platform for the whole world.

Thank you for your leadership Illia, I hope this settles the debate and all the contributors find more ways to collaborate instead of clashing.

On that note, while I do agree that a certain amount of transparency and debate are necessary to maintain a healthy level of trust among the ecosystem participants but it is also necessary that we don’t let hostility pull the community apart. There should be a proper code of conduct for the Forum and an oversight committee should keep a strict vigil to filter all the trolling, provocations and slander out.

We are in this together

+1 on this, i think it’s important to enforce particular cultural norms in our community.

I want to establish a cultural norm around respecting talented folks who are willing to create something that didn’t exist prior (in case of Shroom Kingdom): we are primarily a talent network and should put our best effort into 1) attracting more projects like Shroom Kingdom to our ecosystem 2) helping projects achieve success over time, as we develop playbooks as we go 3) ensuring that our community is open to new ideas, open to supporting entrepreneurial talent, and open to contributing their time, energy and skills towards ecosystem success

I have just posted this in Funding the NEAR Army for July - #19 by illia and post this for @loca555 as well.

Dear, @illia probably, you got me wrong. Yes, some phrases should be more polite, my bad, sorry for that, but Ozy guys and whole Near marketing team don’t want to be transparent and open for Near community. Every one can easily to find out strong relationships between the marketing team, money flows, guilds and scalpers which pretend to true Near believers. They are established their own marketing club and with closed access for external people. 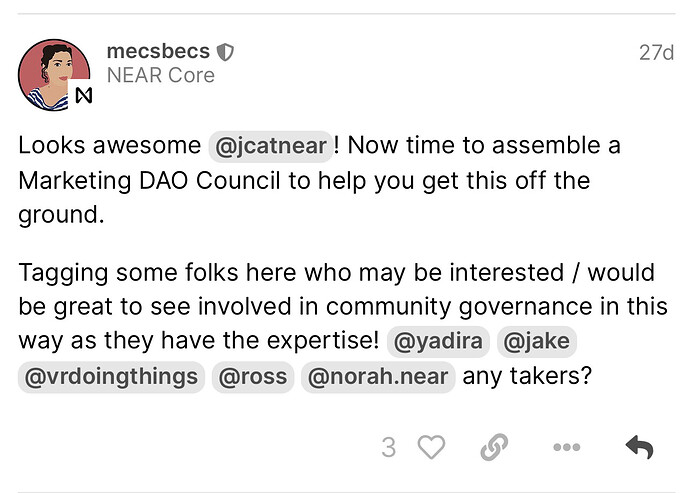 Control all major DAO’s, for instance: 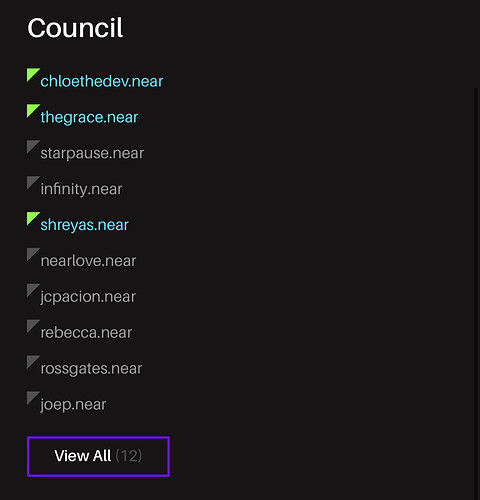 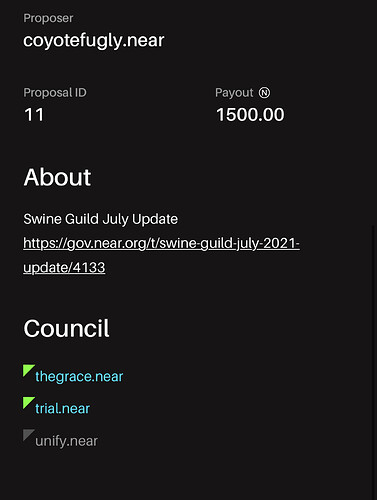 Ignoring questions from the community and when I do my little research, because didn’t get any response, they are attacking me by their marketing paid members (from one template):

I understand them, dependent people, want to show support to Ozy and save a spot in the club . (I have tons of questions to Ozy’s army and investigating it now). Actually, Ozy prepared his attack on me, because wants to stop my attempts to find out monetary relationships between marketing members, prevent encroachment on their closed club.

Dear, Ilia, I am on 100% independent member, I don’t have any relationships with people from near team, devs, marking, etc. Yes, we can play together in telegram casino just for fun, joined the same groups (En and RU community), but nothing more. I’m not a troll, not a communist as @satojandro said and don’t try to demolish something and other rant worlds which Ozy used in his speech.

I am a true Near fun, spend my own money here and support fantastic people like Sasha, Vlad and other hardworking people. You’re making our future right now.

Have a good day!

There’s a lot left to be done in regards to nurturing the forum to ensure an open, transparent, and safe environment where everyone can thrive and feel empowered to make a positive change in the NEARverse.

Still plenty of work to be done, and I’d love to see more discussion around this in this thread, for sure.

Agreed. We can get the guidelines updated to reflect this, unless anybody has an alternative in mind?

For the part I understand and am involved with as a NEAR Core Team member, please read this post: [GUIDE] Guilds, DAOs, DAO Verticals - what does it all mean?

Thank you for your understanding and patience as we go through these growing pains of establishing a new process.