On Sept 22, 2021, NEAR Degen Syndicate held a “Travel to NEARverse” meetup in Ulyanovsk, Russia. As for our channel, we have big plans and serious goals for it.

This is a great starting point for newbies interested in what’s happening right now in the NEAR Protocol, and is very welcome for the existing community. With almost daily announcements of partnerships, product and guild launches, funding opportunities, technical updates, AMA is finding it increasingly difficult to keep up with the ever-growing NEAR ecosystem. The NEAR Degen Syndicate Youtube channel aims to become the hub of all visualized news and information in the near future.

One of the main goals is to attract an audience and show that the blockchain and the crypto world in general is not only about trading various coins on the exchange, but also the development of projects, ecosystems and even games. We believe that a successful strategy is to attract the younger generation, even if they are not so advanced in development, but in the future they can become the basis for new projects that will change the world. We want to create quality content based on links that we consider to be other successful channels from various fields. To interest the public, you need to do it brightly, modernly and concisely — this is the key to success. 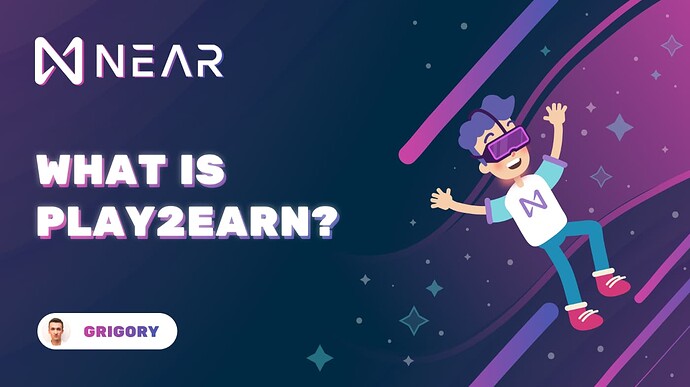 The first speaker was me, I spoke about such a new genre of games as PLAY2EARN, which are not only funny, but also attractive for investments. This model helps solve the question of an economic model for the game that would suit the player and the developer at the same time.

The play-to-earn economic model allows players to create new digital assets and trade them through the infrastructure of the game.
Moreover, in games using the “play to earn” model, players can earn virtual in-game currency that is liquid and can be traded fairly easily for other cryptocurrencies and fiat currencies.

I believe the play2earn game model will be the next wave of blockchain popularity in 2022 and NEAR will take over this niche.

Also I spoke about new games on NEAR Protocol, for example, about the NFT game Pixel Pets from Pixel Daps . Pixel Pets recently hit the mainnet!

In the NEAR Protocol ecosystem, there is a guild dedicated to games — NEAR Games Guild by @garikbesson. In the guild, developers can get full help in creating a game — discuss ideas, collect feedback and test the game.
I also participate in supporting the NEAR Game Guild by making content.

The second speaker was Daria . She talked about how NFT art was born. She told in detail about how to buy a unique token and what right it gives a person. Daria spoke about the recent boom in NFT and the reasons for its growing popularity.

During this lecture, the audience learned about the life of digital artists in Russia, such as Pokras Lampas and Styopa Brackspacer.

A powerful dynamic for the movement of this market is created by the passive income system for asset creators. The NFT creator receives interest on the sale of his NFT on the platforms. 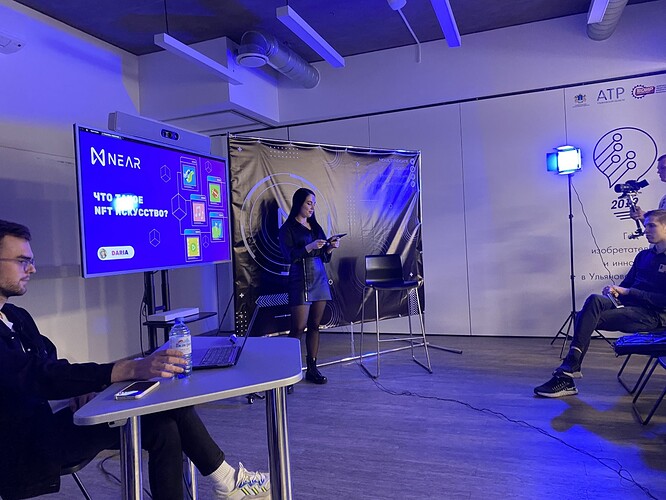 The speaker talked about where NFTs are sold and bought. In particular, she touched upon PARAS and MINTBASE , told about their unique advantages. Both marketplaces operate on the NEAR blockchain and therefore offer a very efficient and user-friendly platform with fast transactions.

The main goal of this boom in NFT tokens and everything connected with them is to popularize the crypto environment, showing the average user that it can be simple. And of course, there is an opportunity to sell unique art that lies outside the plane of the traditional. Digital art is what awaits us in the near future. For example, a member of our team, Grigory, will already drop his NFT works on the Paras marketplace.

And Dmitry delivered the final lecture.

He told the guests about the ways to earn $NEAR tokens.
During the lecture, the following questions were revealed: 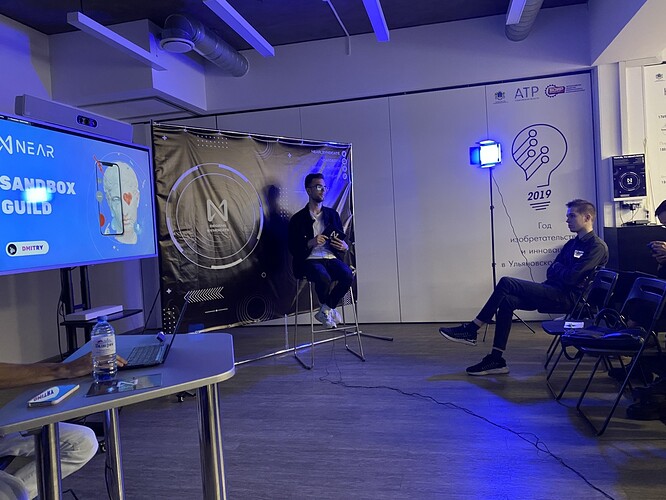 In addition to discussing the main topic of his lecture, Dmitry told what the Degen Syndicate team is like, what are its goals and plans, and also introduced the guests to the team members, at the same time answering the guests’ questions.

As for the guilds of the NEAR ecosystem, and in particular the Sandbox guild, Dmitry spoke in detail about how the structure of the guild works, where to start and how to join it. What kind of content people interested in NEAR Protocol can create and how they can monetize their creativity. 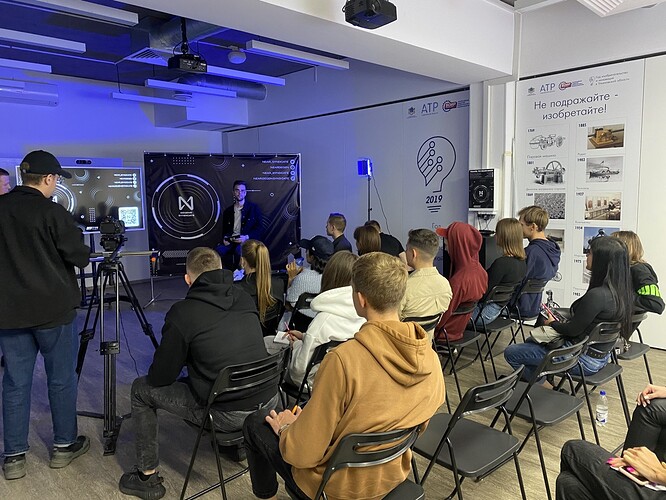 The NEAR Crowd neural network training service attracted the interest of many conference guests. Speaker Dmitry described in detail how to earn $NEAR tokens by participating in this project, from creating a wallet to solving the most difficult problems and withdrawing funds.

Summing up, we would like to note that we have closed all our goals and even a little more. Thanks to the event, we managed to interest even more people in the NEAR ecosystem, we also helped these people create a wallet and how to use it. 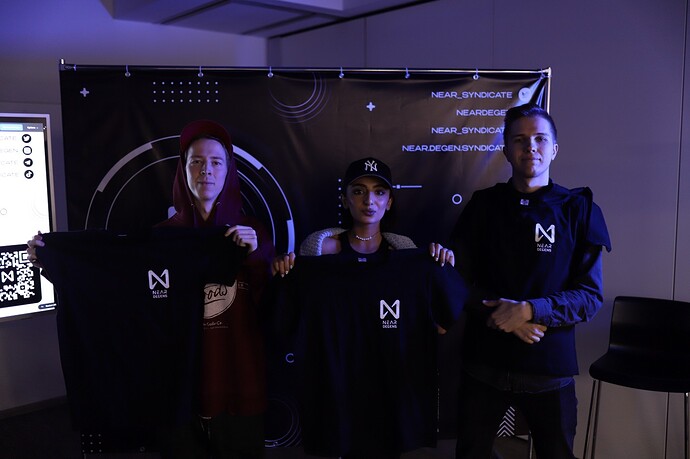 Some of the guys have already started using NEAR Crowd as a way of secondary income, and after the event someone began to study the topic of NFT in more depth. Also at the event, we decided to give our listeners small gifts, for the best questions we presented the personalized T-shirts with our corporate logo and various stationery, at the end of the event we arranged a small buffet table, where we treated everyone with a cake with the NEAR brand logo. At this buffet table, in a more informal setting, we communicated with our listeners and answered their questions, which for one reason or another they could not ask during the lecture. 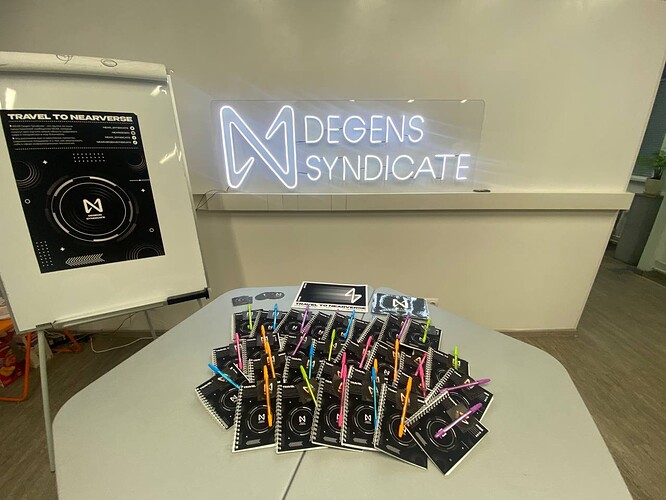 It was an interesting experience and we will definitely develop it in the future, because the main task of this event is to increase the awareness of NEAR not only among experienced users but also among those people who are just trying to study this area. 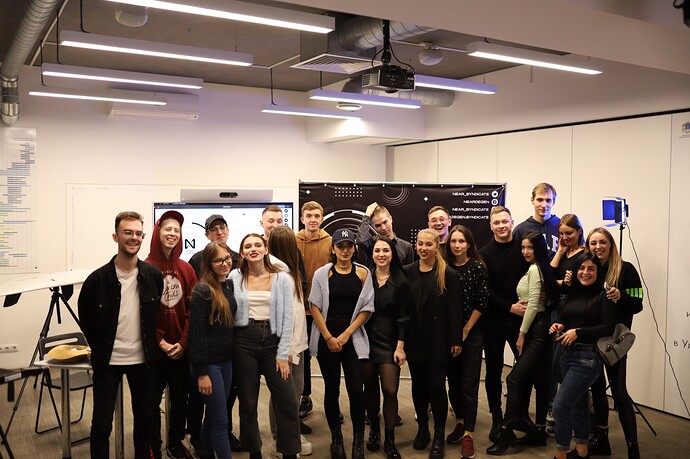 Thank you!
Yes, it was! I think it was fun and educational for the participants.

We hope that we will make more meetups but the situation with the covid in our city has worsened. Hope things get better soon

Looks great, @p0k! Thanks for sharing! How many attendees were there in total? Did you get any feedback from them while interacting with the NEAR wallet or tools like Paras and Mintbase etc?

Would love to see more of these.

How many attendees were there in total?

I think about 20 people.

Did you get any feedback from them while interacting with the NEAR wallet or tools like Paras and Mintbase etc?

Some of attendees already had NEAR wallets and we helped to use Paras, for example

Would love to see more of these.

And so do we! Hopefully the covid situation gets better.