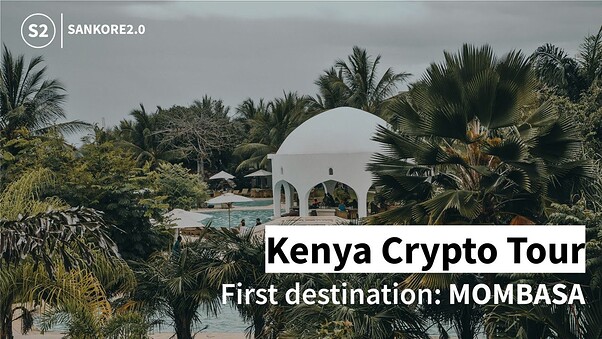 Twenty-seven days ago we announced arguably the most exciting opportunity for NEAR in East Africa, if not the entire continent of Africa: NEAR’s first crypto tour of Kenya, one of Africa’s most tech innovative countries. Our objective through the tour is to grow NEAR’s user base in Kenya by increasing awareness of and opportunities in the NEAR ecosystem. We’ve planned to go to five cities and reach close to 200 people in each city.

Our first stop, concluded a few days ago, was Mombasa, Kenya’s second-largest city with 1.3 million inhabitants.
Arriving in Mombasa, the first thing you’ll notice is the warm coastal weather, which marks it as different from the capital Nairobi. After arriving, we headed straight to the Technical University of Mombasa (stopping only briefly to drop our bags at our AirBNB on the way) to activate NEAR wallets! 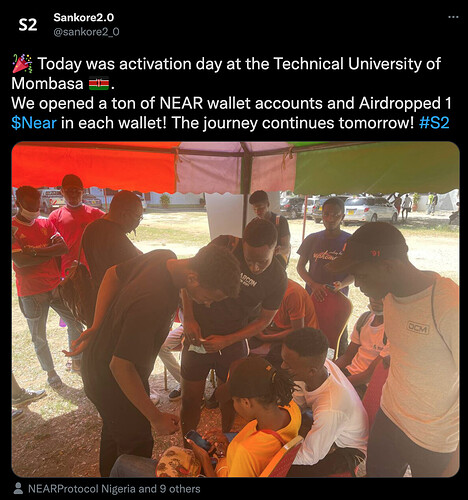 We’re proud to say that we’ve activated 123 wallets in under five days.

In the main event at the Royal Court Hotel, we met with 120 people, close to 80% of whom were students from the Technical University of Mombasa. We presented about our guild, Sankore 2.0, and about NEAR and its potential generally, with a specific focus on the theme of the Tour: Back to the Basics . 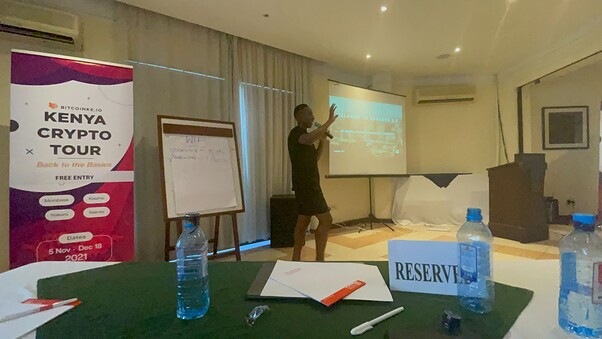 It was necessary to go back to the basics as despite their obvious enthusiasm for crypto, close to 80% of the students had not heard of chains such as Ethereum, let alone the NEAR Protocol. This, however, gave us an incredible opportunity to onboard students into the NEAR-ecosystem, and we added hundreds via the Sankore Guild. Before the tour we had fewer than 60 Telegram members. Now, a few days after the tour, we’re almost at 200. Similar metrics apply for Twitter. This rapid increase reflects two characteristics of Kenya and East Africa generally, which I outlined in a Medium post, that make it primed for explosive growth: its economy largely operates on digital currency already, so the adoption leap is smaller, plus crypto (and NEAR specifically) has many solutions to offer that will solve several current shortcomings of the conventional financial system, improving the daily transactions of millions. (Read the post for details.) 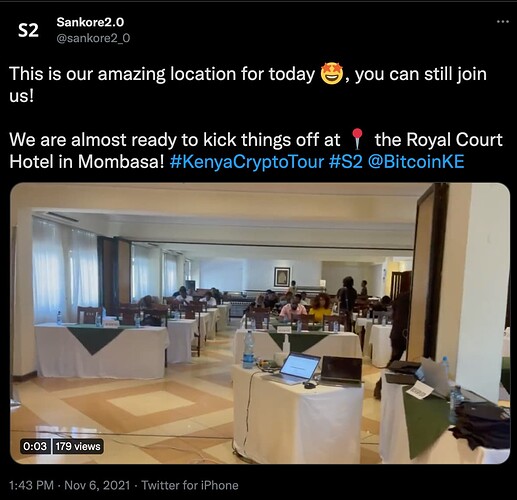 This was NEAR Mombasa’s start, so we set it up to grow further, taking the opportunity to debrief after the event with the future mentors of the Sankore Mombasa community. Several are interested in taking the NEAR-certified training program and will soon become the go-to NEAR integrators for the city, striking up relationships with both businesses and consumers. 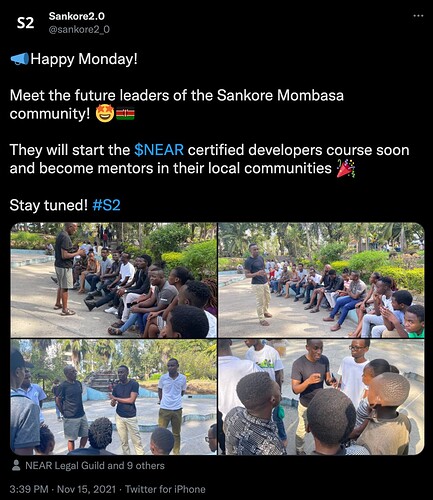 Our tour’s next destination is the vibrant business community of the Great Lakes region centred on the city of Kisumu, the largest and most important city in Western Kenya. We will join the Lake Basin Innovation & Investment Week event and share the stage alongside such speakers as Kenya’s Minister of ICT, the chairman of AfriLabs, the Governor of Kisumu, the French Ambassador to Kenya, and other policymakers and influential start-ups. We will continue to pursue our objectives (expressed in our initial proposal): to provide an overview and awareness of the blockchain and crypto landscape through the lens of the Sankore Guild, with increasing interest, participation and membership. Our metrics remain the same: wallet activations, onboarding new talent, and encouraging their active participation on our new discord channel.

6 Likes
Sankore 2.0 November Guild Report
[RECAP] First NEAR-MEET in Nakuru: One of the most enthusiastic NEAR community of students in Kenya
shreyas November 22, 2021, 7:48am #2

Very cool! Thanks for sharing this, @Mazi! 120+ NEAR wallets in less than a week sounds amazing. Getting them added to the community, offering mentorship are great next steps! I’d love to learn more about what we can do to get the participants to be curious and try out things across the NEAR ecosystem after setting up the wallet. I realize that education is a huge part of this, given the lack of familiarity with blockchain. But perhaps that shows us for a need for Sankore to develop a curriculum that teaches the basics, gives opportunities for people to earn some NEAR and then start interacting with other projects in the ecosystem- maybe staking through Metapool or minting an NFT on Mintbase etc. WDYT?

Thank you for the advice @shreyas !100%, we’re trying to improve our funnel to assist our audience better as we’re operating our NEAR-MEETs. The biggest needs we have is how do we best funnel through different talents to job opportunities in the Eco-system? So that’s what we’re hoping to improve in the following events, so you’re right! We’d have to work on that!