NOTE: I HAVE RESUBMITTED THIS PROPOSAL SINCE IT HAS EXPIRED ON THE NFT-ONBOARDING DAO. I AM ASKING FOR 10,1 NEAR SINCE MY 0,1 BOND WAS COLLECTED

One-liner: purpose: Encourage poets and writers from the portuguese speaking world to create their own literary NFT’s.

Project Summary: Novelists, poets, dramatists and script-writers produce thousands of lines of text without ever being paid. We want to bring them to the Near community and help them create their NFT’s, self-organize and find new ways of monetizing their work.

Starting with Lisbon, and then reaching out to every place where someone writes in portuguese, be it a novel, a play, a script or any other form of literary creation, we want to bring in writers and help them be a part of this rapidly changing new world of web 3.

What we want to do:

We want to serve as a gateway for writers from all the portuguese speaking world (Angola, Brasil, Cabo Verde, Guiné-Bissau, Moçambique, Portugal, São Tomé e Príncipe, Timor Leste, Guiné Equatorial) to enter the NEAR community and use its tools.

We want to bring in specialists and organize workshops on topics such as cryptocurrencies, governance, NFT making and networking. We want writers to be able to grasp and evolve in the web 3 world.

We want to be inclusive and foster an ecosystem where writers in all stages of their careers and provenance have a place to share their work and talk on important matters.

We want to implement a system of p2p reviews, feedback and community-driven creative hubs, where aspiring writers and students can meet established writers, each other, and grow.

This things will allow us to strengthen the literary community online and without barriers, help writers imagine news ways of monetizing literary work, of finding new audiences, new public and new partnerships.

The NEAR ecosystem and the crypto space in general can help artists from all languages and métiers to bypass the establishment and reinvent the world. We really believe there is room to grow, and maybe we will serve as an example for other languages, and other communities.

Very excited with this idea

Hi Frederico (and Juliana and Sâmia), this is very exciting! And thank you for re-submitting. Approved!

It sounds like workshops are the most tangible bit of your proposal. Do you have other outreach plans/initiatives in mind? We’re working on a Community OS Playbook to make running events and so on easier, would be great to have your input on it as we work together.

Are you familiar with nearnames.com for gifting wallets?

Great!!! I’ll have a look for sure and come up with some insights. Yes, we have more ideas such as online and physical artistic residencies where writers can meet each others work, have experience with p2p reviews and mutual growth. Another idea that we have, to run online events here: [Ideation] VR Online Artistic Residence check it out.
thank you

hey @starpause! Thank you!
I’ll check out the playbook and yes, i am already familiar with nearnames.com

I really want this to be more than just giving workshops and onboarding people. We plan on integrating this (and every ideia we have) on our DAO (IncubadoraPT) and get developers and programmers in, more cultural producers and all kind of artists and really stretch the limits of what we can do as a community.

Right now, at least in this part of Europe, we need desperately new ways of doing business, specially in what concerns visual arts and literature (cinema, for example, already has plenty of support; script-writing not so much…).

So, to answer your question, yes we’re planning to do more than workshops. We’ll be talking with partners and try to figure out if we can build some sort of online tool to help bring in writers and facilitate some sort of an economic model.

There are plenty of websites and platform where writers can sell their services, but we want a different thing: to provide a place where artistic-writers can meet, talk to each other, organize events, online and physical residencies, exchange of ideas, and, fundamentally, create revenue from their life’s work.

We’ll see what we can come up with.

VISUAL OUTLINE of our project, check it out »» 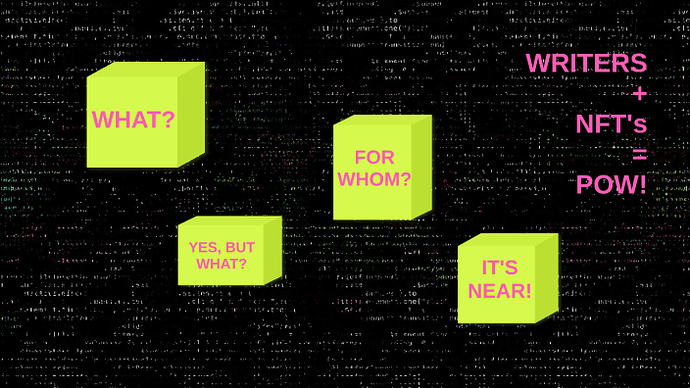 WRITERS + NFT's = POW! WHAT? WHAT? On-board writers and push for web 3 solutions for governance. YES, BUT WHAT? YES, BUT WHAT? ON-BOARD WRITERS CREATE LITERARY NFT's FOSTER CREATIVITY SOLVE PROBLEMS WORKSHOPS WORKSHOPS ABOUT: NFT'S NEAR ECOSSYSTEM...

Thank you for the feedback @starpause. We’ll keep at it!

Anyone who wants to collaborate join us on our discord https://discord.gg/t7kqNvax 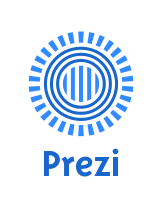 sorry about audio quality, im recording with a potato

Oops. Here we go, this link works for the video:

sorry about audio quality, im recording with a potato

You could give krisp.ai a try (my ref link, gets a month free, but their free plan is also fine for recording pressentations). I used it when there was constructiong being done next door. People in meetings with me didn’t know

Preso looks good, excited to see this initiative prosper! I am constantly at the discord server limit so I’ll stay peeled for forum posts.

Could you update this post with some metrics you aim to achieve
per week/month/quarter (or whatever scale you’re comfortable estimating):

Goal with the metrics isn’t to estimate with 100% accuracy, just to take a guess and have a goal. As you gain experience you can adjust estimates after each measurement cyce.

Have you already formed the DAO?

You could give krisp.ai a try (my ref link, gets a month free, but their free plan is also fine for recording pressentations). I used it when there was constructiong being done next door. People in meetings with me didn’t know

hey, thanks! I’ll try it out. Sadly i managed to ruin the sound card in my laptop I think, i’m running an OS that allows me to push things to the limit and maybe i crossed it

Could you update this post with some metrics you aim to achieve
per week/month/quarter (or whatever scale you’re comfortable estimating):

We have our DAO running and we’re working on 3 or 4 projects. In a couple of days we’ll have a full roadmap for the next 18 months or so. I think we can cover all those questions and more

Thanks a lot for your feedback!! 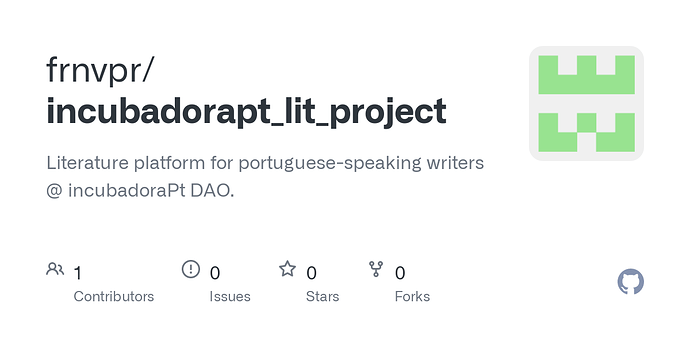 Thanks for spinning up the repo.

Can you do a monthly breakdown of activities for your roadmap? To keep things managable we’re planning on monthly checkins and payouts through guilds/daos so planning along those lines will help you set reasonable goals.

hello @starpause! Right now i have this as a roadmap, but it will only become official after the members of the DAO have a chance to discuss it. For reference:

Thanks for providing the timeline, let us know if your DAO mates approve the roadmap. We’re setting up monthly check-ins with projects that want to continue building after the hackathon. DM to set something up if you’re interested!