Hi everyone, it’s been a busy 24 hours, hasn’t it? Since things have moved quicker than anyone expected, I want to be as clear as possible about the status of NEAR’s circulating supply so everyone is on the same page about it. Here is some useful information:

Steps we are taking now to clarify and address all of these things:

To address some questions I’ve seen:

#Q: Of the tokens in categories which will be distributed by the NF, which ones are free for the NF to use now and which ones can it not use?
#A: As written in the blog post, the NF endowment has 100M tokens day 1, of which 50M have a 24-month linear lockup and 50M are free for any use on day 1. Other tokens held on behalf of other categories (for example unclaimed tokens) are not “free” to use even if they’re unlocked because they have a different purpose. Those will make their way to their end destinations and that typically means lockups, as described above.

#Q: When are block rewards being enabled?
#A: As per the Phase II launch post (https://near.org/blog/near-mainnet-phase-2-unrestricted-decentralized/), the network upgrade is expected to ship on Monday and be implemented by validators within 1-2 days of that happening. At that point, block rewards will be enabled.

I hope that helps!

" Staking in the NEAR Wallet is for Locked Tokens only…for now. Very soon, you’ll be able to stake all tokens, whether locked or unlocked. We built the interface for Locked Tokens first because that represents the vast majority of token holders in the community. This means if your tokens aren’t locked, you can’t use the NEAR Wallet for staking just yet, including viewing any stake positions you have created through Dokia or the command line."

Does it mean that if we staked through Dokia we won’t be able to see the earned staking rewards in our NEAR Wallet UI?

Thanks for the question @ama89.near , albeit at a wrong post.

Today you will no see if you staked directly from your account (e.g. you will only see staked locked tokens) in NEAR Wallet.

But support for this will be to NEAR Wallet added in coming week or so.

I’ll pay more attention to post in the right section the next time. 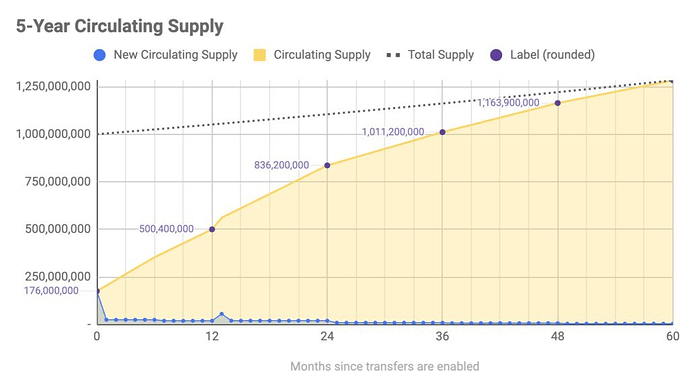 just made calculation via compound interest calculator,. from info I got,… there is 167 M Near staked , so in next 365 days (1 year) there should be more 7.8 Millions Near (rate 0.0125 % perday),… , so I don;t understand with how will the chart above be explained (that next 12 months there will be around 500 Millions NEAR, around 330 millions additional of NEAR), could anyone here enlighten me? TIA,…

See the changelog at the end for the major changes.