NOTE: This post is used for updates, when some phase will end or start, I’ll update it here.

NEAR Mixtape vol.1 hosted by the BeatDAO

Read about the release on NxM’s Medium:

Official artwork, plus 10 additional artworks as representative covers of the songs were made by @ted.iv. See below the main artwork of the NEAR Mixtape along with promo flyer.
Rest will be revealed on the date of premiere. 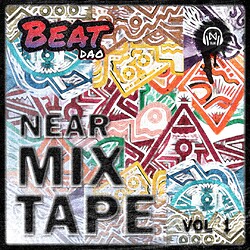 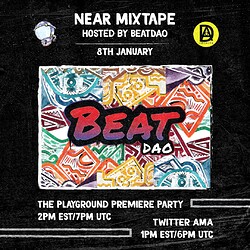 To highlight music producers, singers, rappers and graphics designers, we would like to propose an NEAR Mixtape vol. 1, which will be fully created by NEAR community. The premiere of the mixtape will be preceded by the special party in the Metaverse in The Playground.

The NEAR Mixtape will consist of:

As such projects require a lot of work to set everything in place, we propose to do this in the following steps:

I propose to participate as an artist in the NxM mixtape. Am all in

Noted and updated. I’ve put you as a vocalist/rapper.

i d like to participate with one track too my frens

Awesome! Would you like to do the music for @JohnX or do you already have a group of artists to collaborate on one track?

I am down for collaborations with any NxM artists… @komori we can make something happen on your own track too… However way, mine or theirs…I’ll write bars if am invited

I’d love to participate as a producer/musician! Happy to also help with mastering if a mastering engineer is needed! This is dope

@komori and @JohnX I’ve put you as a second group on the list if that’s ok for you.
@mwhyden I added you to the list as music producer.

Thanks so much! I was thinking actually, I recently collaborated with @nillynoon (vocals) and @ted.iv (artwork) to make this audio/visual NFT for the October NxM Anthem:
Shy One - Mark Waldron Hyden x Nilly Noon

Thinking maybe we could link up again for this? Explore our ideas some more, maybe add this track to a future EP or something!

I’d love to see @ted.iv as main graphic designer for NxM mixtape.
If @nillynoon is ok with that, I’ll put you guys as a third group on the list.

That’s great thanks for being up for this! Super excited to see where this goes

Yes yesss super down for this!

Hey @Paul definitely down for this! Count me in

You know this from time brethren…

Me and You Paul for that Error beat, I’m done with the lyrics, just the timing to record is not suitable at the moment but yah, I am so down on this. Or do you want it to be a separate project? Like picking a new beat to rap on or something? Anyway just let me know and holla at me