[REQUEST] March, April, May 2022 Educational Onboarding and Meetups for NEAR Argentina

Our community has been growing non-stop for over 5 months backed by all the socials, meetups and academics initiatives that our team has been supporting. I want to summarize all the achievements we address the last 3 months with a payout proposal to cover progress made on the kickstart of the regional hubs that has been remade twice in which we gathered a lot of students and certified them, with no funding. The request is made since we talked thoroughly with Luz Margarita, Cristian and Claudio. We reached the conclusion that we should ask the Education vertical if there is a way to repay our team, mostly the efforts that we have made the last 3 months.

Regarding meetups, we have been focused on organizing virtual events and interviews. The audience varies among crypto enthusiasts, investors and web2/web3 developers. We arranged spaces to be made on previous months but the Regional Hubs initiative stated that there were 250 per meetup if we aimed our content in explaining about Near, Blockchain and onboarding them to the Near Certifications (Which we did and we shifted our entire Guild Mission and Vision in the future to head our content towards education)

The main objective of the bootcamp onboarding is to establish a follow-up, guidance and assistance to the participants of the NCA/NCD certificates, establishing a common channel to encourage participants communication within the community.

Official documentation came through and we have 21 certified members currently (and still missing the whole April and May reports from Near Hispano).
We are expecting to grow our Academics area even further, there were some complications with the Regional hubs and it will surely be detailed in future posts. This is the reason why we didn’t come through with the contact in academics but we changed all of our efforts to virtual meetups and networking with huge actors in the influencer scene. We expect to resume our contact with different institutes in the near future. 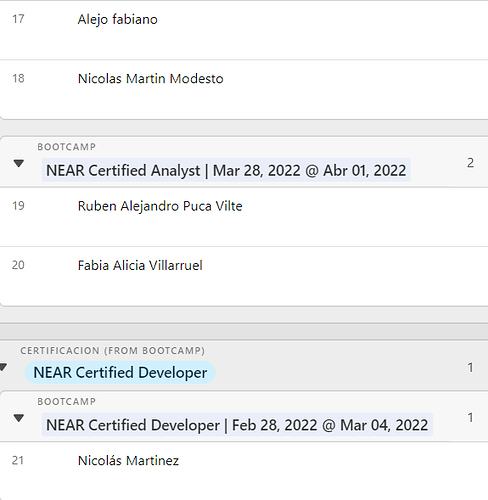 Our team has been focused on the academics onboarding from March by following-up, giving guidance and assistance to the participants of the NCA/NCD certificates, opening wallets (funding) that is required for participants to join the bootcamps.

More to come during June to August

Other initiatives regarding meetups, events and education onboarding.

Thank you for taking the time and consideration to think this through. If there is any other way or channel to ask for this payout let us know. This is mainly to set the record straight with the team behind this. We have been working non-stop with no payout (regarding education) in between, until the Regional Hubs initiative came through and there have been several rescheduling on its launch.

Take into consideration that @nacho.near work and management is not included (except one and a half meetup made), he is not to take part in this payout regarding management since he let it clear with the core team (council members) that the sole purpose of this payout request is to set the record straight with his team, from promises that were not of him but from bigger projects and the foundation itself.

Keep building, up only from here

Great post Lean, totally on board and fully support the request.
If there is any need for feedback, more information on the matter or simply discuss whatever is needed to be talked I am here

Thanks @leamanza ! Brillant briefing of Near Argentina’s team work . In this passed five months we’ve seen a massive grow of the community backed on educational activities and social playground. Let’s keep it growing! Many thanks to the rest of the team @nacho.near and @Turco , I’m so proud of you guys !.