This month we’ve started all our activities including the NFT-contest 2 weeks later, as soon as the proposal was approved. So we had to extend the timing of contest to the beginning of May that’s why the rest of report about it (winners, number of votes) will be added after few days.
Anyway, we’ve got a great experience and learnings, and results, that are going to be worked on during next months.

Highlights
in March we’ve performed NFT-competition on Mintbase, prepared guide for participants, 2 meetups NFT-lab studying how to mint NFT, voting, created 3xr-gallery and shown it while awarding.
in April almost same scheme was done with NFT-contest on Paras. and we see that it works as educational-bounty event throughout all month with social media support. on our meetups we’re meeting some people with their NFT-collections or 3-5 years in blockchain, and anothers who touch cryptoworld for the first time, creating wallet on NEAR. and we do our best to show How Easy is NFT
April NFT-contest details: Voting document ; collectibles on Paras of goadao.near - 16 artworks of goadao-members are collected. and a quide for NFT-contest on Paras was made.
in the moment of posting we have 102 votes and it’s just 2nd day of voting, and 2 more days left

also we want to highlight :
.- goadao account on Paras is verified now!
.- now we have a Linktree !
.- logo GoaDAO has been renewed 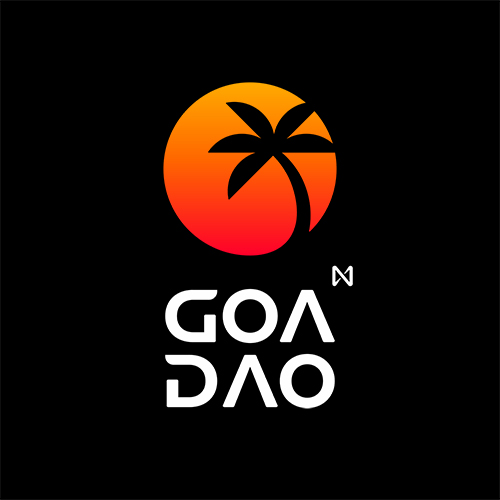 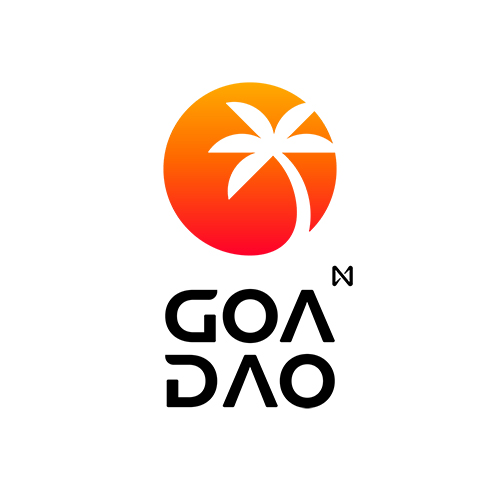 .- Goan Vibes 3XR-Gallery by goanpsywaves.near has been created, minted 20 copies, one is sent to goa-dao Astro. first, concerts and parties were recorded, edited and mastered to create NFTs from the material. with goanpsywaves we’ve also performed some experiments about streaming to Metaverse the best quality of sound.
.- New promo video is coming : draft of new coming video "My story with NEAR and GoaDAO" full - YouTube
rest is to add subtitles in english and make some corrections
.- Now we’re invited by quite a big and very strong united community TripFoundation to start support a series of their professional and authentic events, that represent spirit of Goa with all kinds of art. 4th of May is the 1st event

Detailed :
1-11.04 - working on approving the proposal, and :
-. 5.04 meetup in Arambol
-. 7.04 meetup in Morjim
-. video from Vadim after meetup https://www.instagram.com/p/CcZ-wkLBr7n/
-. studying new council about AstroDAO
-. preparing to NFT-contest: guide, posts
-. NamasteyNFT conference invitation - working on it, connecning to other DAOs
-. individual meetings with musicians and other goa artists, as well as active members who participated in NEAR ecosystem projects by themselves (with our technical guidance) in collabs: with Voice of Oceans open call (1 artist), Octopode bounty (2 artists participated). kambodja.near won INA DAO project “Faces of Goddess” 1 prize 200$ , joined as a member to their AstroDAO (more details are below)
[all collaborations of goadao members with another daos]
-. near.guilds - fill the profile of GoaDAO
-. 2 more guilds are guided to create DAOs (Belarus DAO and Mental wellbeing DAO) about steps of onboarding to NEAR
-. 12.04 - meetup NFT-lab +NEAR games
-. start the NFT-contest
-. guide how to mint on Paras Paras.id guide - Google Slides
-. team meeting for brainstorming about future 3-month proposal of GoaDAO
-. preparations to stream of EcstaticDance Ceremony on Tamago - 4hs individual meeting with artists marsyanna.near, testing transferring the sound on other events, promotion
-. LingamNFT came for support and the member from the team took curating them to examine how to promote NFT-project on NEAR
-. individual consulting Karina - work about her NFT-project for May
-. preparing meetup with NFT-producer for goa NFT-projects (by their demand)
-. rent a parcel in CV for 100usd/month
-. printing new series of stickers and flyers 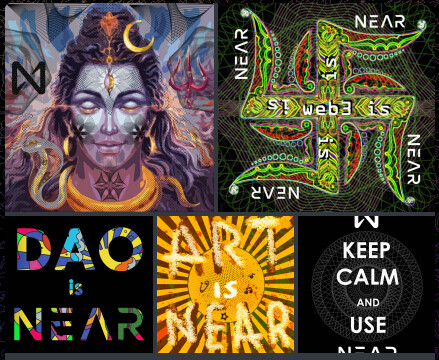 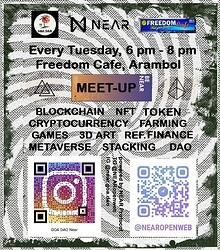 image576×1280 49.9 KB
-. 21.04 hold meetup-workshop with russian NFT-producer. great event for certain amount of intensed people (members of GoaDAO) who already created or in the process of creation his NFT-project (collection or a game) and has exact questions or proposals. Boris shared his projects, actual results and strategy that was used, and how processes were passing. useful educational and friendly 4-hours workshop, that we hope could bring benefits , that will show results in the NEARest future
-. team-work on description of GoaDAO parcel’s design -
GoaDAO Residence - Google Slides
-. decision about extension of NFT-competition Telegram: Contact @NEARopenweb
-. since 24.04 working on report and proposals for May.
-. Almost every day individual consultings, growing active members, creating with them a plan of GoaDAO for the next 3-4 months.
-. preparing next Tamago stream
-. working on new video, now it’s in the final cut
draft of new coming video "My story with NEAR and GoaDAO" - YouTube
-. new initiative from member goas.near about making tutorials about participation in financial activities that are announced on NEAR. the first one - Skyward Finance App / he was granted with 6N for making experiment about taking part in IDO with creating of video-tutorial set from the experience step by step with explanations, and answering questions from other members concerning this topic in TG-chat GoaDAO. (links on video-report below)
-. IG promotion MeetUp 26.04

image576×1280 43.3 KB
-. 26.04 meetup where many people got answers on their questions
-. mic and laser wireless presenter ordered
-. renewing logo of GoaDAO and in all social media!
-. working on proposal for NFT-Metaverse Summit in Bangalore; on next months proposals for GoaDAO
-. 28.04 stop accepting works for contest - and start to upload it to the GoaDAO CV parcel
-. start voting +IG promotion of it (still going)
-. consulting and start working with TripFoundation community from supporting their event(party) - 4.05.2022, aimed on creating 100 wallets (who opens wallet - enter for free) and nft-activities: nft-drop on just opened wallet,that gives a free drink in bar; streaming dj-sets to CV parcel goadao, and recording its audio and video to create 3-5 NFTs from the party to send as gifts to members who opened wallet there. it will be used for next events as members cards or discounts, with collecting the NFT-collection for the future game. 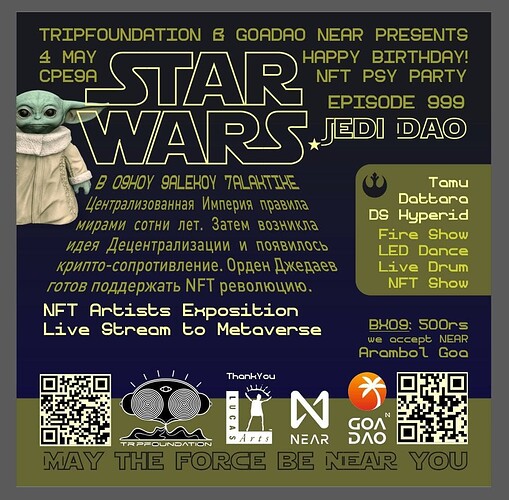 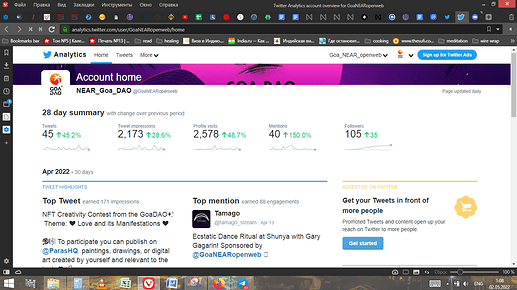 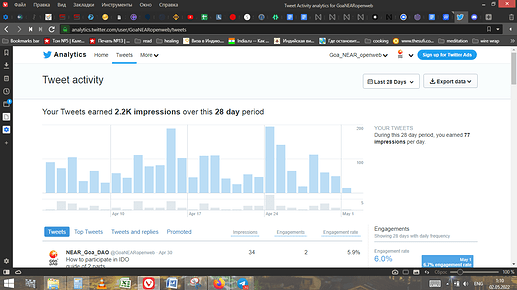 Most Active Members of GoaDAO :

and more, who are coming to every goadao meetup and participate in every discussion and contests (like @Pover @Kama and others who are not on forum yet)

so we’re creating next 2 contests : for May in collaboration with @UniqArt , for June about voxel-art (with metabuilding classes) for whole ecosystem, and artworks will be posted here on Forum by all participants.
details are coming soon with next Proposal

Good evening, thank you for sharing the awesome report.

Thank you for support!

Good to see another regional DAO report. Keep up the good work! 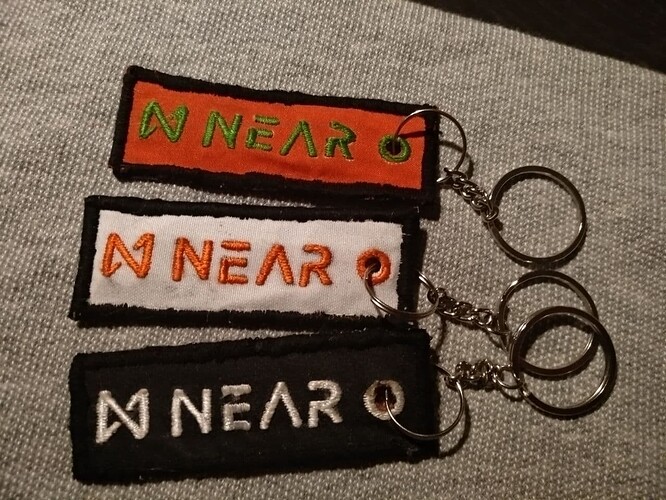