This month we put most of our efforts to the charity NFT-contest, which has provided us with a number of cross-collaborations as well as made us to grow as a DAO,

article on medium about contest
2/06 start

guide for contest on UniqArt.io

Bounty for artists on the forum

16/06 Voice chat in out TG channel about contest

Post about NGO, that performs purity activities , for which clean_india.near wallet was created to collected funds :

Clean Up Around You Global Environmental Movement

Clean Up Around You Global Environmental Movement. 2,529 likes · 3 talking about this. We strive to stop any pollution of the planet. We inspire people to clean up around them. We work hard. We need...

it was performed a number of invitations to other DAOs to call their artists for collaboration about creating NFTs for this charity project:

around 15 artists of goadao participated in contest to support local charity initiative:
as well as it was onboarded new artists [who has started to be active on forum straight away - [Closed Bounty] Rhyme Schemes Poetry Bounty - #27 by thirdside]

since 19th to 27th of June we were performing various activities for initiating buying charity-NFTs:
-Bounty on the forum to buy collected NFTs
-Memes contest
-posts
-AMA session in Twitter space (links below)
-posting in Discord, Telegram, for Instagram our content manager was creating reels and animation videos to increase visibility of info.
-some artists manifested initiative for promotion of their art in NFT

as a result of monthly contest our CV parcel was remade by goadao artist @m23agic into charity-gallery: 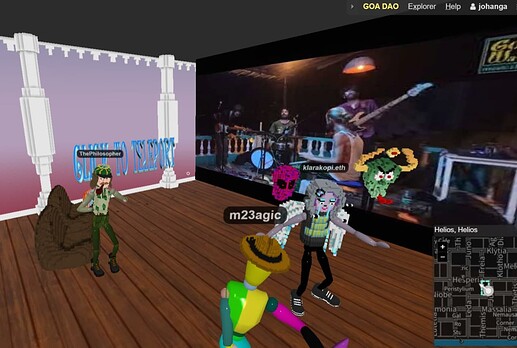 we hope, every participant gets royalties or rewards and feels good

check your wallet to confirm you receive NEARs

Learnings:
So , we’ve got quite a big collection of charity NFTs for #purity, around 40 pieces (and the quality of marketplace is so now, that impossible to count, it changes the content every time).
we’ve onboarded new artists to GoaDAO and new members to our community
it’s collected 10.03N for the moment on clean_india.near account from revenues and royalties of sold NFTs
and we’ll continue working on developement of these charity NFTs: some of them will be dropped when preforming giveaways in collaboration with games, mems and other NEAR communities; some will be used for proving participation on cleaning activities in real life. Then on the next stage every owner of charity-NFT will get special access to “NEAR Charity Angels MetaClub”, that will be presented in every NEAR Metaverse and will be responsible for purity there.

Still it’s not a lot of NFTs from #cleanindia collection was sold even after we were actively involving NEAR Ecosystem through different media channels. Until we don’t have enough collectors in the Community, we need to invent and find more ways/mechanics of utility/ how to bring benefits to charity purposes. i’d like to ask somehow NEAR Ecosystem community to create online workshop-meetup where we could share with each other these approaches to charity NFT-projects.

** Curating NFT-cajon creative project
mostly report has been made here in this post, where are all the links to NFTs and Galleries, that was made by GoaDAO :

Good morning Community ! glad to invite everyone to MetaDrumCircle - opening exhibition of Course of drum lessons as NFT-collection and NFT-real-cajons ____________

its announce in social media

some learnings:
-because of the idea itself, this project becomes a way of deep examination and study of vault-varda under the guidance and partnership of @ jilt
-then because of big amount of educational material that was minted as NFTs on mintbase with locked content from one side, and from another side 3xr had produced several bounties around new gallery-templates, so with this NFT-collection we’ve explored opportunities of 3xr using different templates and ways of galleries connections- it was made 5 galleries all connected to other according to logic. [so now we even have NEARCrib !]
-for the last party it was also recorded drum circle, edited, mastered and composed into video for streaming during exhibition - we’re becoming profi in audio-streaming to metaverse, prerecorded or live - we’re proud of the quality of sound
-NFT-gift (3xr-gallery Collection of drum technique Exercises) was transferred to 43 near.wallets this is a collection of 12 exercises by cajonmajon.near, for sharping hand technique from the drum course, which includes 12 exercises + 29 rhythm lessons. also there are entertainment videos of cajon-production. This NFT is a 3XR custom gallery...

** Create protocol is onboarded on NEAR !!
we start making agreement and proposal with them about partnership - they will build metaverse space for GoaDAO
-Create Protocol invited @ johanga to AMA in Twitter space (link below)

** @ m23agic goadao artist was a designer, then with us he start to be NFT-artist, then we’ve performed voxel-art-class with Crista , so after the 1st one he starts to explore voxel-art. at the moment he is working with our CV parcel. feel here success - we’ve shown to this designer new direction of self-growing and professional development, and in some time he’ll be able to create nearhub room - i’m sure

[DHARMONY ph01] Hello! We are DHARMONY It is our multi genre art-music project, which is now based in India. We are the music band playing 2 different styles programs - esthetic rock and electronic live The main members of the team have been creating together since 2014, but the name DHARMONY with us from the 1st January 2022. Formerly we had two different projects named Coma Soul and OSTROVSKY band. You can check the most complete collection of our official releases on our Bandcamp: dhar…

** NxM proposal , curating and onboarding new active goa artist and games-developer @INACHE
also 2 more artists are in the process of preparing their proposals to NxM:
1)

pover.near Hello, My name is Maxim. I’m a musical artist living in GOA. I play the flute (Indian classical instrument known as Bansuri), and other musical instruments too. I’m inspired by Indian classical music( Raga) I’ve recorded and uploaded on Tamago few tracks which got appreciation from people and which motivates me to make more quality music. Now I’m really keen to create more relaxing and meditative content along with other good musicians whom I plan to onboard to NxM. create wallet…

** work with developer/goadao active member (Roma)
1)dev proposal - to NEAR grants, human guild, proximity (no reply)
2) horses-NFT-collection for yacht club - we’ve met in Bangalore on NFT Summit the owner of yacht and horses club , communication with him from one side and with Roma’s team from another brought all of us to agreement about goadao artists are creating NFT-collection of members-cards for the yacht Club.

**we’ve started to put more attention and energy to exploring Astro, especially after uprade to V.3 it became more useful, and grateful to AstroDAO member who is giving me support during all the last unstable time on Astro that let me believe stronger in its future

so we study most active artists to add themselves to goadao Astro as members, and how to propose a transfer to those who creates GoaDAO with us.
at the moment there are 16 members , and it’s just the beginning (mostly people now are out from Goa because of moonson/rainy season)

** changes has been performed in DAO in transferring Councils as well. It all has a goal to gather and join decentralization of web3 with Goan Art Cluster(creative community) to grow Meta Art Cluster by GoaDAO
@ NataShi left Council position to make more art and curation work about her own projects (but still with us as artist).
@GoanPsyWaves start to be a Council after several months of being soundproducer of every stream or minted audio-NFTs.
**Together with @MetaArtCluster as another new Council the whole promo agency (Magic Mash®) start to be onboarded on Goa DAO with all their many-years experience in organizing events in Goa, with an amount of artists that agency has been working with forages, and with strong intense to shift the management of interactions with artists and each other to web3, to maintain and grow MetaArtCluster on GoaDAO in decentralized manner , and to spread awareness among artists of all the genres, who lives in Goa, about opportunities on blockchain (through NEAR) : music, sound, cinema, digital art, drawing art, lectures, educational workshops, galleries, yoga and other practices - by the plan all kinds of artists will be manifested in goadao events before season (touristic) starts (October/Nov)
**Detailed description of current Council positions and roles will be included in the next monthly marketing proposal soon

all the social media links are here : NEAR GoaDAO | Linktree

1. Instagram
our IG got content manager @Crazy_MoT , who’s started to maintain this channel as professional SMM . He has cleaned IG account from inactive users so at the moment it’s
159 followers 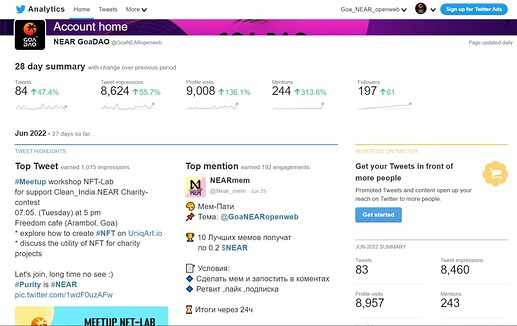 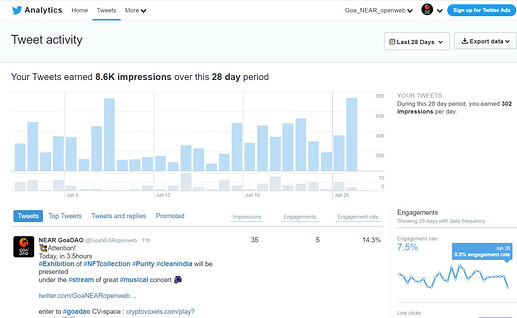 have a wounderful day !

A very well detailed report, that’s a quite lot of work done in mentioned months

feel like India is the best region to achieve that )

Indeed, huge number if young minds out there ready to seek knowledge

we’ve noticed that when visiting NamasteyNFT summit in Bangalore and it’s amazing how curious and opened are young people in India !!

Thanks for the report

Thanks for sharing awesome report.

honestly, would love to ask any feedback about our new TG bot
probably it might need any corrections, we are opened to accept propositions or anything

easy to check it in Telegram channel

@ConciergeTeam not sure whom to tag, sorry for disturbance in case it’s not for you

Hello! This guy was the one helping in the Creatives DAO Telegram chat:

I am sure he will be willing to help you @johanga

hi, sorry for сonfusing mr.@FritzWorm but i didn’t ask help

bot works excellent by our common innerDAO’s point of view ,
active and smart developer has onboarded, who made it without even payment - just from interest to create useful and good tool for us:)

here i’ve offered to leave any feedback from Community side

This is the bot right:

Telegram: Contact @NEARopenweb pinned message with all the info about GOA DAO

Telegram: Contact @NEARopenweb pinned message on how to translate

We should learn about the last one, we have now the translation featured implemented here in the forum and we should also start implementing this on other channels like telegram

Add a verification process when you welcome a new user to avoid bots. Several communities where I belong had received bot attacks like Near Venezuela and Merchants.

thank you! appreciate your carrying for safety of our community very much !!
now we’ll add that for sure !
we’re international community that lives here in Goa , in general, we’re used to speak english but there’re a lot of russian-speaking Ukrainian and Belarusian people as well. first time we were trying to maintain 2 channels both languages and it wasn’t the decision. until Telegram add this function we were in a trouble, so now happy to share such a necessary tool for our Ecosystem ) 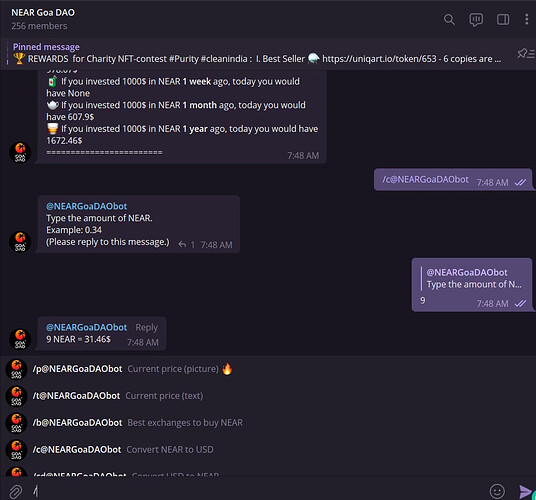