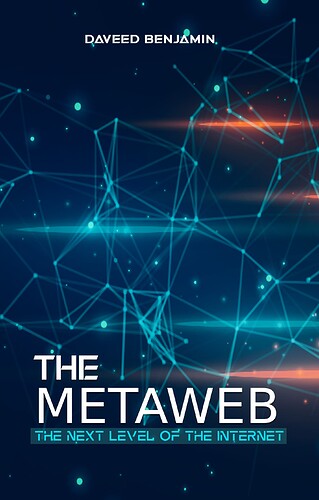 I am writing a book called the Metaweb: The Next Level of the Internet. It is about a new layer on top of the web that creates decentralized public space above the web page, which will drastically reduce the problems with false information, abusers, and scammers, as well as enable an unprecedented level of connection and coordination that is necessary to deal with our existential threats.

This will be a physical book. It will also be the first “metabook” with virtual presences in the Metaverse and augmented reality. This will be demonstrated and then implemented over time, independently of the physical book.

My publisher is the renowned Taylor & Francis. I must deliver the book by May 31st, 2022. The book will be published on or about Dec. 1, 2022. I am anticipating the book to be about 250 pages. I have an editor and she will be joining the NEAR ecosystem.

HUGE UPDATE: My publisher Taylor & Francis has agreed to do their first book NFT with me on the NEAR ecosystem. My intention is to help them do this one and also to set them up to do any of their other thousands of books as NFTs on NEAR. They are looking at the contract I put together now. We also agreed that the book will be authored by my new AstroDAO, Bridgit DAO. They feel this will be a selling point. We are going to set it up so that staking the book NFT and other NFTs that we create for the book will earn a royalty allocation. At least 50% of the royalties from the book and the NFTs will go to stakers.

I would also like to feature the NEAR ecosystem in the book as an example of a community of practice developing around POS layer one blockchain and visions of an open web. I reached out to @David_NEAR to get a contact in the NEAR Foundation about this but they are not able to get involved and he suggested that I get in touch with the Marketing DAO. I put in a proposal asking for someone to do a short piece for the book about the NEAR ecosystem, but it didn’t go anywhere despite that I was not even asking for money.

[cover_01-2 (1)] I am working on finishing a book by the end of the May about the open web. I would like to put a case study in the book about how NEAR is creating a community of practice around an Open Web3 ecosystem of developers, entrepreneurs, artists, designers, instructors and more and why that is important in these times. The book suggests that we will not be able to solve the problems of today’s web or develop the needed collective cognitive capabilities to address our existential thr…

So I am putting a Bounty to write this piece in this proposal.

AshleyC Could this project be part of the guild? I would love the guild’s help in building this.