The introduction of EVM runtime support in the NEAR Protocol will be a major change for Ethereum developers who are seeking an alternative chain. This search is mainly caused by enormous Ethereum gas fees, which are the consequence of the absence of scalability. The NEAR EVM runtime, compared to Ethereum, provides a number of enhancements:

The aforementioned means that the NEAR EVM will solve the current and future computational pains of the Ethereum ecosystem, preserving the existing engineering investment in both smart contracts and in frontend code.

This post aims to shed some light on the NEAR EVM architecture and the expected changes to the protocol. We are also going to use this post to collect requirements for EVM testing before the eventual MainNet launch.

For those interested in the EVM roadmap for Q1 2021, find it here and here.

In recent weeks we have made an important decision to move most of the EVM implementation to the contract level. What does this mean?

The current architecture of the NEAR EVM looks as follows: 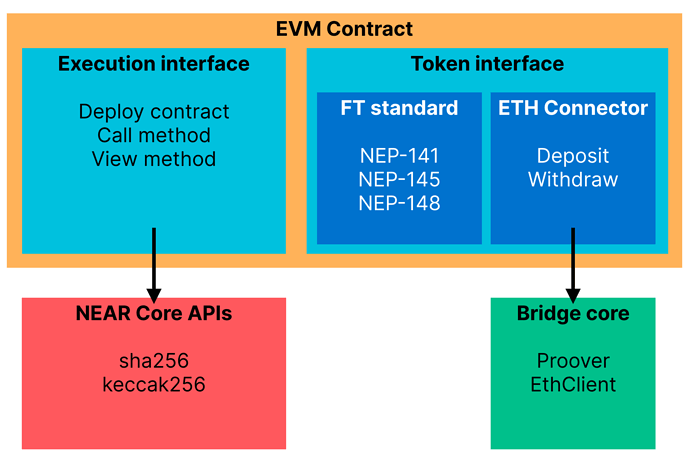 The operations allowed in the EVM runtime may be moved to the NEAR Protocol level (and thus become precompiles) in case a smart contract does not deliver target performance. For example, on the protocol level there are sha256() and keccak256() precompiles already available. In case of the need for additional precompiles, a protocol upgrade will be proposed to NEAR validators. The information on the required precompiles will be collected once sufficient load testing performed.

As per the outcome of the discussion, on the EVM base token, the EVM runtime will maintain native balances in Ether (ETH). This means that a user should move his ETH over the Rainbow Bridge to NEAR before sending any other transactions to NEAR EVM.

In order not to confuse a user, we decided that the EVM contract will implement a fungible token interface, which will represent the user ETH balance in both the NEAR base runtime and the EVM runtime. Besides this, a user should be able to withdraw and deposit ETH to NEAR, and this will be implemented as a separate bridge connector interface, which underneath will speak to the core bridge contracts (see more on the bridge architecture here).

The code for the EVM contract and adjacent tools can be found in the NEAR EVM repository. The Token interface is at the moment implemented in a bridge connector; however, it will be merged into the aforementioned after the development is done.

One important side of the NEAR EVM design is how users will be paying ETH for the transaction execution. 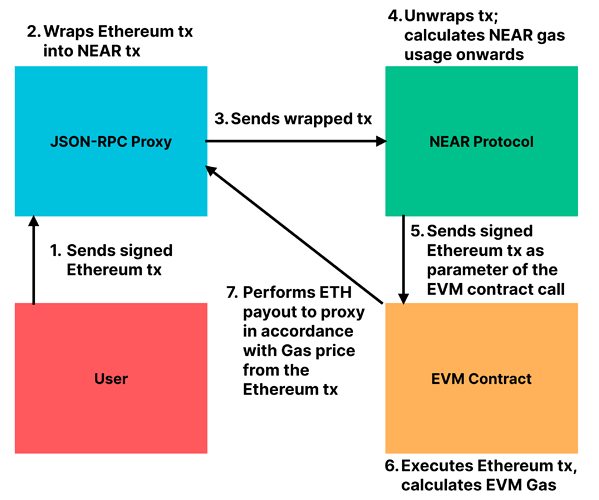 The approach is the following:

This approach is viewed from the user side as just paying ETH to the protocol, while in fact it is the $NEAR token which is used for the calculations, and RPC nodes acting as proxies/relayers between the user and the NEAR blockchain.

Find more information on ETH as a base token in this discussion.

The current objective of the NEAR EVM team is the release of a fully operational EVM version to NEAR TestNet by the end of March. This version will cover all features including ETH bridging (using existing TestNet bridge deployments), RPC proxy, and EVM runtime execution. We’re also planning to stress test the NEAR EVM with a custom tool named ‘EVM Bully’, that will replay an Ethereum chain (the Ropsten testnet, say) transaction-by-transaction to the EVM contract.

The following things will not be implemented during Q1:

Though the EVM release to the MainNet (in case no precompiles would be added) is fully dependant on the deploying party—which can be anyone, since the code is open—we would like to gather the requirements & metrics from validators and the community. We will use these requirements to fine tune the contract and eventually release a version matching the community’s requirements.