1600×390 25.9 KB
Monthly Active Developer continued the growth trend for the past 30 days and continued to grow at a faster rate than previous week and reaching almost 1500! This is most likely the continuation and effect of NEARCon.

1061×487 36.8 KB
Average level of account creation had a slight increase after NEARCon and experienced some more increase, mostly from undefined source, therefore, hard to develop an understanding of the potential cause.

From the breakdown below, we can see the usual leaders like ref, skyward, learnnear.club and bridge. However, we also see new referral sources such as https://mars.bocachica.io/ and satori.art, this shows that our awareness funnel has expanded and more places are listing us and more projects are directing traffic to NEAR. 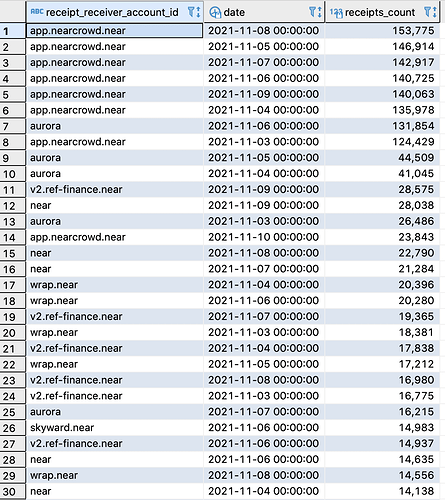 1122×1262 274 KB
Daily transactions had another spike this past week on Nov 6. From the contracts breakdown, we can see that the spike was mostly contributed by Aurora, which just finished IDO and announced the integration with Chainlink and also conducted AMA. This shows that Aurora project is getting more and more usage and growing.

1600×610 53.7 KB
There was a spike on Nov 2 for new developers, reaching almost 80, a result of all the exciting announcements that day, including Nifty Comedian NFT, Token Terminal listing and MooPay. 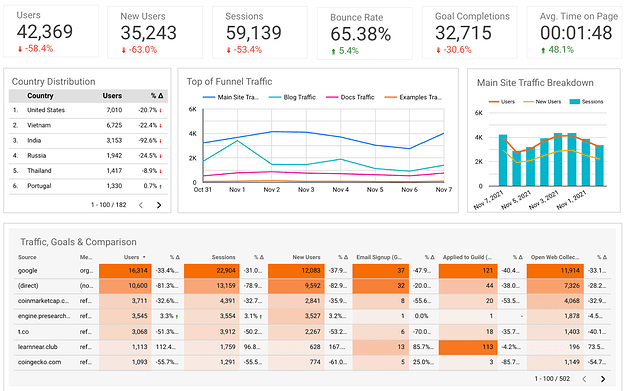 1600×1004 304 KB
The traffic decreased by around 60% from the previous week’s huge spike, which is a very reasonable level of decrease.

However, several things worth noting are: Portugal increased by 0.7% this week in terms of country traffic breakdown, showing the NEARCon effect continued to spread in Portugal. In addition, learnnear.club traffic increased by over 100%. YouTube, which just posted NEARCon videos, also experienced a 200% increase in traffic, showing that NEARCon videos are successfully attracting people’s interest.