1600×394 25.4 KB
Monthly Active Developer continued to grow from previous weeks, passing 1250! The momentum of growth was continued because of the partnerships, NEARCon and integrations in the ecosystem.

1063×484 37.6 KB
Daily account creation level spiked during 26-27, which is around 2x our usual level, as a result of the NEARCon showing that we were able to onboard and convert over 15k people at the event to join the ecosystem.

From the breakdown below, we can see that DeFi landscape at NEAR is again on the top of the list, especially excited to see the new name cheddar farm on the list. learnear.club was able to continue with the awesome work and directing more new comers to the account creation pages.

Mintbase event was successful with its rank on the top 10 here. Bridge and Aurora continued to gain interest from the Ethereum community. 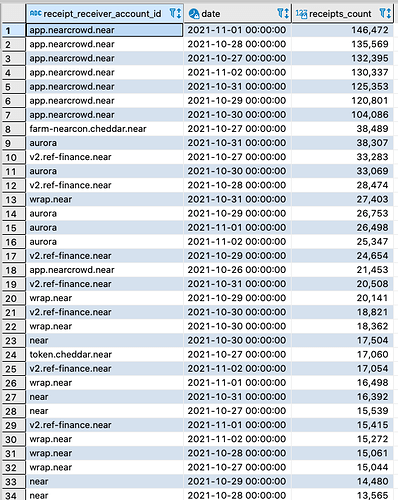 Daily transactions spiked to the level of around 350k during the days of NEARCon, showing that not only new accounts were created, but they also interacted with dapps and projects in the NEAR Ecosystem.

From the contracts breakdown, we can see that the spike was mostly contributed by nearcrowd, which was proudly mentioned by Illia, Cheddar, newly released farming on NEAR, ref and aurora, was well as wrap.near, all effective signs of the activeness of DeFi on NEAR.

The average of new developers using CLI increased to 50 last week, which is another 25% increase from the previous week, showing that all recent announcements and events were able to successfully attract developer attention.

Weekly active developer and dev-deploy/deploy remained stable at 500 and 200 respectively. However, we can see that the ratio between the two experienced some slight increase up to 2/5 instead of the ~1/2 as before. This shows that many weekly developers were not deploying or dev-deploying rather using view smart contract commands more often. We will need to observe for a longer period to make a conclusion around if this is a normal trend some time after events like hackathon. 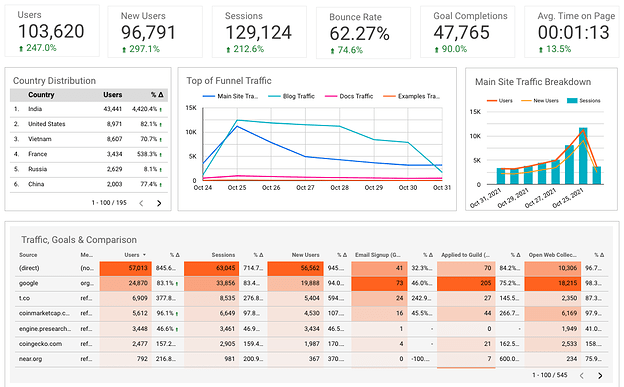 The traffic increased by 250% with new users increased by almost 300%, showing more new users came onto near.org. This is one of the largest increases on a weekly basis that we have seen after mainnet launch.

NEAR price increased to a new historical high at ~$13 last week around the time of NEARCon, after the announcement of the $800M ecosystem grant and the $350M DeFi grant.

So awesome to see this outlined @tiffanygyj!