I’m the creator of berryransom.com

It’s a berryclub bot that targets accounts that owns the largest amount of pixels on the board. There are 8 accounts that split the board between themselves and seems to be protecting each other. If someone challenges them, they are protecting each other by erasing the newcomers. They claim that they let other small people to draw the art, but in reality any new account is almost immediately removed. This happens 24/7 (maybe except the free drawing days). This is not fair and it’s call oligopoly, which is not better than monopoly.

The goal of this bot is to make the unchallenged farming more difficult and to bring more players to the berryclub ecosystem. The bot only attacks the selected accounts, who acquired too much space on the berryclub board. 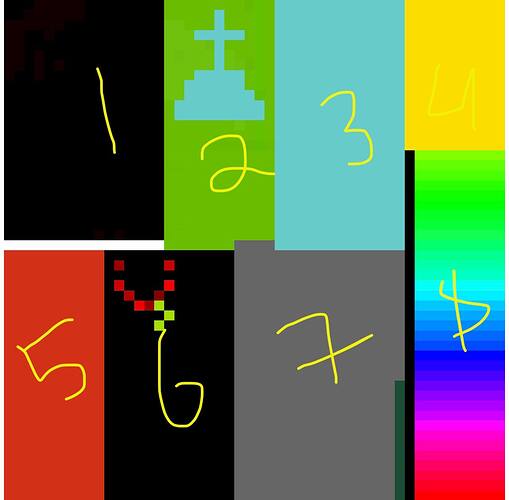 So far the bot has burned about 750 NEAR on fighting the farming cartel and will likely burn more. If you want to try to fight the cartel, you can support the cause by donating on the website (just login first).

If you are one of the accounts that are targeted by the bot, screw you. Just pay the ransom and don’t mess it up the next time.

P.S. This is what berryclub used to look like in the past: Your screenshot does not depict the average number of players that went from 3-5 to as many as the game had originally 15-20.

As for the art we have been discussing amongst ourselves how to bring this back. However, you negate the fact that the art seldom remained and was immediately destroyed by vandals right after the game’s launch. I was a major artist early on.

I am open to a dialog and suggestions.

Just sent donation to you.

we are not a cartel, we all paid a lot and once our art was destroyed by vandals. the art is still alive there is only one problem … we are the actual artists and would now be against vandals with this field economy. I remember well when you had already started your bot months ago and destroyed all art on this field and now you have suddenly become a Robinhood?? Blaze and I keep pushing big players to get smaller so there is more space. and we are also successful. before there were only 3-5 players and now we have an average of 10-12 players more than the double. we fought for it for a long time and burned ourselves a lot nearer. much more like them!
stop this bot immediately and let’s find a peaceful solution. blaze and I can’t do magic! We doubled the playing field within 4 weeks and it is also in our sense that more will come to berry. and we don’t believe in bot play. Cultivating a field means being present and if you don’t, then you are unlucky. there are enough farmers who want a place,but it’s amusing the way you portray it, first you made farming with 6a3b82 … impossible months ago and now you are training us on how we make farming impossible ??

I ASK YOU… is this for you farming ??? this is just 5 weeks ago and watch whats happen now !!
if you like i search yours… the beginning of destroy Berryclub ??
You Destroy Art too !!! you showing now your true face snowcrash ??

DONT BELIEVE THAT BULLSHIT WHAT HE TALK TO YOU. HE TAKE YOUR MONEY,SO DONT BE STUPID

Sorry for my bad english. What is the ransom ? We are in the 17th century ? Every player on the board loves drawings and tries to cultivete a berryclub for more players, but what are you doing it is absurd… You give the concept of a cartel, but you youself look like a mafia or you pass off black as white using foul play with a bot.
P.S about the video that you left. There were good times when only geeks knew about berryclub (2020 after the launch of the blockchain NEAR) and, accordingly, only they drew something for fun, but with the development of the NEAR ecosystem, a lot of people want to farm and get profit, and the concept of capitalism/territories works here.

It sounds interesting, @berryransom did bring some changes. As I said, the roles of berryclub are getting richer and richer, farmers, robots, berryknight, castle master. I am just an ordinary farmer.
I am also often disturbed to stop farming. Maybe I will donate to @berryransom, If the robot is doing well.but I will never pay the ransom.

I’m not supporting the TS, but my general point has always been that Berry Club should evolve the rules.

The current rules are very simplistic and lead to bots dominating the map by definition.

I suggest at least few ways to address this:

For expanding beyond simplistic Berry Club to something that can scale to 100,000s of players, see this suggestion is going beyond simple farming and really focusing on cooperation and competition while creating value via art sales: https://docs.google.com/document/d/18SHlXCrOa8faaSM4TRQzoaLSxW7t56-IHCjNlYpmstI/

Instead of blaming the bot, you can take a look at what cpu.near does. But you probably already know because you clearly communicating with each other to protect land of each other. NEAR Explorer | Account

Here are the 4 transactions from cpu.near that draws all over the board:

The bot just draws over cpu.near's pixels. I’ll make bot less disruptive, so it doesn’t mess as much with color.

@berryransom and then what was the last few hours? they always painted over my pictures and all the other farmers. berryr … and your friend aj … dominated the whole map for many hours. So who is lying here? we know you too well and we know that you are not doing anything good

show us cpu here Lier !! We dont trust you. Just surrender and search for a other game

Screenshots are no the best way to track the actions on the blockchain. I’ve pointed to the transactions by cpu, that draw all over the board. The bot just draws on top of the same pixels.

Here is the last transaction from CPU: https://explorer.near.org/transactions/42Cwmde6b2toNLYnVXH9PMRoui1EFiUaoUEKFwm5U3aB

And the last transaction from the bot: NEAR Explorer | Transaction

The draw the same pixels. But the bot draws after cpu, that’s why the pixels on the board are from the bot and not from the cpu.

Are you the founder of berry club?
I don’t know how to say it, but it’s not good to have only some user accounts taking up all the space. This will make more people draw better pictures…
In the other hand, I don’t understand what the ransom is for, I think it benefits you. If they pay you, then they take over again right? So this is no different then?
So this just a fight for personal benefit rights. everythings will continue again in the future.
I’m just a small participant,i have no space there.
So in my opinion, I don’t support the work of either side. Hope each side will have a more appropriate solution

berryrason is then the only winner, not only that he demands a ransom, he farmed your field then. he is more or less landlord and policeman in one. But I also read the good news today. the game doesn’t do what he’s up to for a long time

Instead of blaming the bot, you can take a look at what cpu.near does. But you probably already know because you clearly communicating with each other to protect land of each other. NEAR Explorer | Account Here are the 4 transactions from cpu.near that draws all over the board: NEAR Explorer | Transaction 7zNZ1YevarCHAbk3ETByoGvhWNRjQxJqN2br4EY1zaiZ EagFahGC2aHfcWzYEXxNMnkwt8ZqhAvxp4HftZH91XJv 42Cwmde6b2toNLYnVXH9PMRoui1EFiUaoUEKFwm5U3aB The bot just draws over cpu.near's pixels. I’ll make b…

CPU.near as a farmer, I don’t think he has a problem, I know he has been using high-transparency pixels to protect art. On the contrary, the use of robots to Dimensionality reduction of farmers does not represent justice.
In addition, according to the block record to check the rewards obtained by the cpu, I don’t think you can effectively sanction it. Therefore, I think that robots are just slogans of justice and become the biggest dictator and monopolist.
You may have forgotten that players can use witch attacks, you cannot ban all accounts, so I think the ransom is invalid.
But I am happy to see the catfish effect caused by the intervention of the robot. The players are more active.

I’m not supporting the TS, but my general point has always been that Berry Club should evolve the rules. The current rules are very simplistic and lead to bots dominating the map by definition. I suggest at least few ways to address this: A DAO that would allow to blacklist accounts from participating. Making it less permissionless, and depending on who leads the DAO would lead to either domination of art or oligopoly. Require Proof of Work to commit pixel. The more pixel committing per minu…

I agree with @illia . To make bananas more valuable. Attract more players to enter, if there are 1,000 or even 10,000 players, the situation will not be the way it is now.
My initial idea is to introduce bananas into the berrycards system.
Bananas maybe a great way to activate Berrycards. However, bananas currently lack the burn mechanism. It is reasonable to vote using bananas, get cards and burn bananas, staking berrycards to get banana rewards, etc.

I would like to start by acknowledging your grievances. Berry Club is an early experiment and has led to many very, very interesting dynamics and lessons in behavioural design, tokenomics, and it seems guerrilla bots.

I agree with @illia ; if you have the technical ability to create a bot to ‘fight back’, you most likely also have the ability to click on the ‘Fork me on Github’ label on the bottom of the page.

Creating a bot and setting up the community on fire is fun. But have you ever tried building a new dApp and gaining the support of the community?

I’d personally love to see newer iterations of Berry Club appear. I’ve been sharing some of my personal ideas about it months ago on the Discord server and know that there are several engaged community members who would love to contribute, we just lacked the technical knowledge at the time.

If you, or anyone else (you don’t have to reveal yourself as the ‘ransom guy’), would like to start ideating on how to fork and iterate on Berry Club, I would encourage you to join Silicon Craftsmen, the Product and UX Guild where we can join forces and make it happen.

are you marcel1111? now i know 2 big whale. Hope you can let more small farmer alive (like me :)). And i agree with the idea of santojandro. Berryransome, you can work with the dev, make berry club more better.

Berryramson: P.S. This is what berryclub used to look like in the past (and here video above).

I create art. And what?

Berryramson: pay me 5 NEAR because I’m here MAFIA BOSS.

It doesn’t matter if you draw art or not, pay me

hi, my name cryptopunk1100.near
you call yourself robinhood, oh no, you are the bully of the weak
i have 100 banana/day, and now you ransom me

Beautiful nd such a clear form of explanation