This month I thought about starting a project that I believe will contribute not only to the dissemination of dramaturgy, but also to open up other ways to expand the dissemination initiatives of the Guild and the NEAR ecosystem, through creative initiatives. Below is my proposal. Hope you like it!

Requested Amount: 700 USD in NEAR/ DAI

DESCRIPTION
“Dramatic Conversations” is a podcast project, produced and presented by @eliaspintanel and @johnfaus, members of Cia. de Teatro Notívagos Burlescos, which aims to produce dramatic readings of short texts and carry out informal conversations with contemporary theater authors. The main focus is to create a space to publicize the production of current dramatic literature, offering space for authors to present a little about themselves, talking about their personal trajectory, creative process, their influences and reflections on the Brazilian authorial scenario.

We intend to carry out a first season with 6 episodes inviting different authors, each episode will be divided into two parts, the first part being the reading of a text by the guest author and the second part the interview with the author. However, as it is a project with a considerable length, we will divide it into 3 stages, thus, this proposal contemplates the production of only 2 episodes with two different authors being interviewed.

Initially, we will work with Brazilian authors because it is the language we speak and because Brazil is a region with a great impact on the diffusion of the NEAR network. With this proposal, we intend to contribute to the diversification of the NEAR Protocol and NEAR Writer’s Guild dissemination channels. We also intend for guest authors to join the NEAR ecosystem and, consequently, expand the network of dissemination of their initiatives within the blockchain.

The guests who will participate in the episodes will be defined by the team, considering their relevance and impact for the project, and based on the availability and flexibility of the authors. 5 professional actors will also be hired to perform the dramatic reading of the theatrical texts of the guest authors.

OBJECTIVES
• Production of the first two episodes of the podcast, with approximately 90 minutes each. Intending to be biweekly, the episodes will be made available: on their own Spotify channel, on the Cia’s social networks. Teatro Notívagos Burlescos (Instagram, Youtube, Facebook, etc.), and on other NEAR Writer’s Guild channels (if interested). Remembering that each episode is divided into 2 parts: dramatic reading (45 minutes) and interview (45 minutes).

• Attract playwrights to the NEAR ecosystem so they can contribute to community development.

PUBLIC
Hosting the episodes on a large audio streaming network and investing in boosting publications on social networks will ensure that the audience has a diverse audience. And focusing on contemporary Brazilian authors who are still outside the NEAR ecosystem will also help to broaden the NEAR Writer’s Guild audience.

All episodes will be recorded and will be permanently available to watch on Spotify, on the Cia’s YouTube channel, Instagram and Facebook. of Burlesque Night Theater. Episodes can also be uploaded or shared in a playlist on NEAR Writer’s Guild channels.

FINAL PRODUCTS
Production of 2 episodes of the podcast “Dramatic Conversations”, hosted on its own channel on Spotify, and on Youtube and social networks of Cia. de Teatro Notívagos Burlescos.

Reporting here a little about the progress of the “Dramatic Conversations” project. Unfortunately, we had some mishaps and this caused a delay in our completion schedule, so I am doing an interim report instead of a conclusion report.

First of all, I apologize to the community and, more specifically to the board members, for not meeting the deadline. But as unforeseen events occur, I ask for understanding. Below I will describe in topics the progress of the actions involving the project. Come on:

CHANNEL NAME
When we were about to launch the project trailer, after some research on the internet, we discovered that there was a project from a university here in Brazil that had a very similar name. So, to avoid confusion, we had to change the name of the project on Spotify to “Dramatic Dialogues”.

INTERVIEWS
Initially, we got in touch with playwright Fernanda Zancopé, who immediately agreed to participate in the initiative, even emphasizing the importance and pertinence of the project for the dissemination of national dramaturgy and for theater in general.
Fernanda gave us the text “O auto do fim do tempo” and was also interviewed by me and @eliaspintanel, on 07/16. The interview took place via Zoom and it was amazing, despite our nervousness, it was very rich in content, both technical and personal. We asked questions about the text that involved its structure and theme, we also talked about the author’s writing process, her trajectory and perspectives on national dramaturgy.

Then we managed to interview the playwright Sofia Fransolim, on 07/19. She gave us the text “A Louva-deus”, whose text also opened the way for us to dialogue about female and feminist dramaturgy in Brazil, in addition to the same issues that were addressed with Fernanda. Although at first she was a little shy, the interview was amazing and went very well.

Difficulties
In this process of contacting the authors, we were adrift for several days, as some did not return our contact or ended up not showing up for the Zoom call on the agreed day. Such situations hampered part of our schedule.

DRAMATIC READINGS
As we mentioned in the project, we created a format where each episode would have a dramatic reading of a text by the guest author, for that, we invited three more actresses to participate in the reading. Unfortunately, the best date we were able to carry out this action was on the 25/07th, which also resulted in delays in the production of the content. However, on the same day we were able to read both texts provided by the authors, which we thought we would make it a habit for the next episodes.

The reading of the texts was organized by @eliaspintanel, who divided the characters between the actors, managing to create an excellent rhythm for the audio format.

EPISODE EDITING
Parallel to the process of creating the material that would be edited, I was already working on the audios that were emerging and taking care of creating the hosting infrastructure and also the graphic identity of the project. So, we created a profile on Anchor.fm (nominated by @bagadefente, very grateful for that!), and made the podcast presentation trailer; we also buy a royalty-free license from a music site, to get access to high quality sound material.

As the interviews had been collected first, they were ready before the dramatic readings, however, we thought it made more sense to make the reading first and then the interview available on the platforms, so we had to wait. This situation helped us understand that planning needs to be improved to become more dynamic and to minimize periods of “idle” when we could be giving referrals.

As I didn’t have much experience with editing and capturing audio, I had some difficulty picking up the editing rhythm and solving some technical problems regarding the quality of the captured audio, but in the end I ended up understanding the process better and I believe it will become more agile. from now on. We also understand the best methods of capturing audio, so we can correct this in the next episodes of this season.

During the editing process I felt more difficult with the editing of the dramatic reading, as there is a need to create a whole environment with sound resources, to make the reading of the text more powerful and attractive to the public. However, despite the challenge of editing it, the result is extremely satisfying and dynamic (I hope you like it as much as I do lol).

We have one of the episodes with its two parts (interview and reading) fully edited, having been released on 08/01 the dramatic reading of the text “O auto do fim do tempo”, on Spotify. Fernanda Zancopé’s interview is already scheduled to air on 05/08.

We believe it is possible to complete the project and post the final report by 08/30.

DISCLOSURE
Because we were a little behind on the project’s deadlines, we decided to create a trailer for it, but we’re waiting for its official release for when the first episode is finished, so that listeners can have some material to enjoy and, in this way, engage in the follow-up. from the project. So far, the Spotify channel has 4 subscribers.

To publicize it on social media, I chose to create a trailer video with channel art and a background spectrogram that reacts to the trailer’s sound. This is the graphic piece that we’re pushing on social media, as we’ve found that videos engage much more than images.

RESULTS AND ACTIONS ACHIEVED SO FAR:

ACTIONS TO BE COMPLETED:

RESOURCES:
As the guild funding has also been delayed, we have not yet requested any payment for this proposal. We intend to apply for the first, to pass on to the actors and authors who collaborated on the project, and the second request for payment after the last episode airs on Spotify and the final report is delivered.

Ep. 1 | Dramatic reading of the text “The self of the end of time” – Spotify 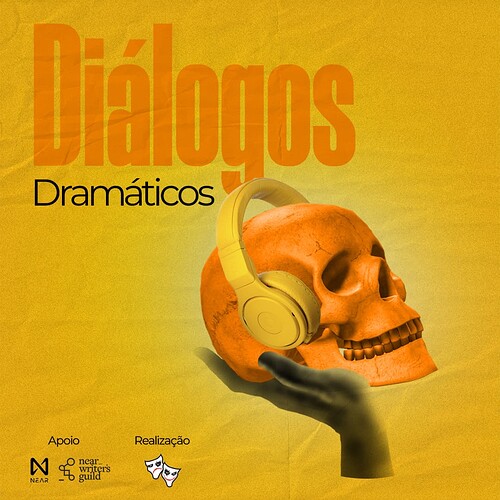 I hope I have brought you satisfactory information about the progress of the project. Once again we apologize for the delay in the schedule and thank you for your understanding, as we are working hard to deliver the best possible result for this wonderful project!! We really appreciate the trust and support in this initiative!!

Editing (08/15): I edited the report to update the project schedule and add the topic about resources. Any questions or clarifications I am at your disposal! Thanks for the support, guys!

Phew, we finally finished this first part of the “Dramatic Dialogues” project!
I’m very happy to do this report and very happy to be contributing to this project - and for the Writer’s Guild to be supporting it, of course!

Before starting the actual report,
I would like to point out that it has been very gratifying and empowering for me to be able to make the projects that were approved here within the Writer’s Guild viable. These are projects that would hardly be approved within traditional means of financing for culture, which, consequently,
would not allow them to be implemented, as they have a relatively low cost to make and we are not always able to be seen as capable of carrying out such initiatives. But here we are finishing another one!

Thank you very much for the advice,
for seeing together with us the potential of the initiatives that I have proposed and that I have also contributed to. This has meant a lot to me and to those who have worked with me, as we are growing and diversifying our alternatives.

This project specifically, although it gave me a lot of work -
even more for having faced a change of city during it lol – but it has also made me very satisfied, precisely because of the positive returns and interactions that the public and participants have had.

I will not focus on the difficulties during this report, but on the achievements and returns,
so that everyone can know about all the potential he has.

Okay, let’s get to the results!

Results and actions achieved so far

As stated in midreport, we faced some difficulties, mainly with regard to the schedule, however, here we are with everything finalized!! 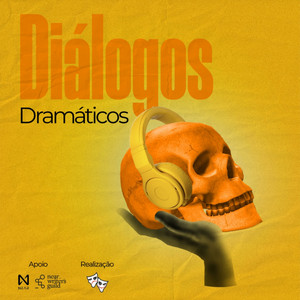 Listen to Diálogos Dramáticos on Spotify. 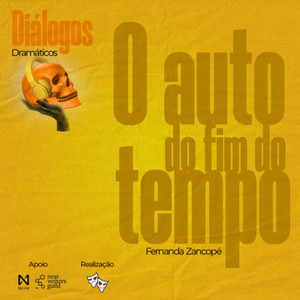 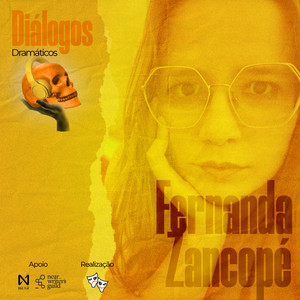 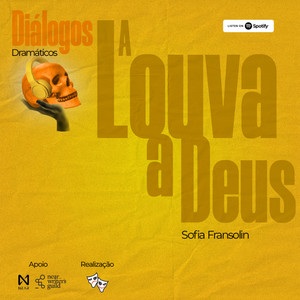 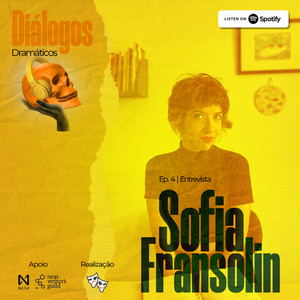 .
.
Positive feedback from participants and listeners
Below I leave some prints with some feedback we received in relation to people think of the project. 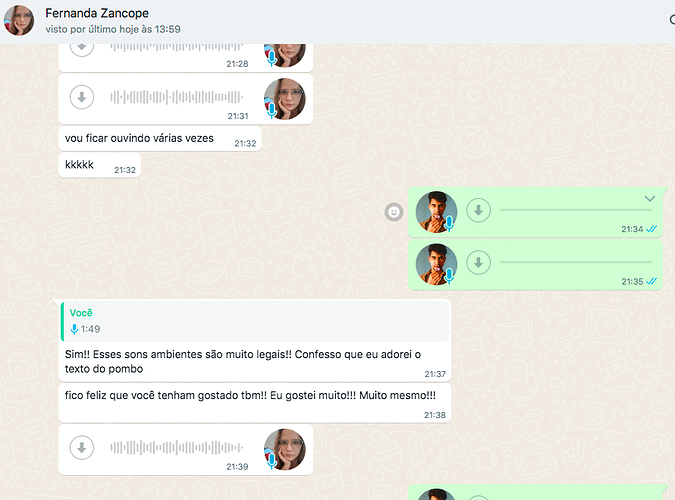 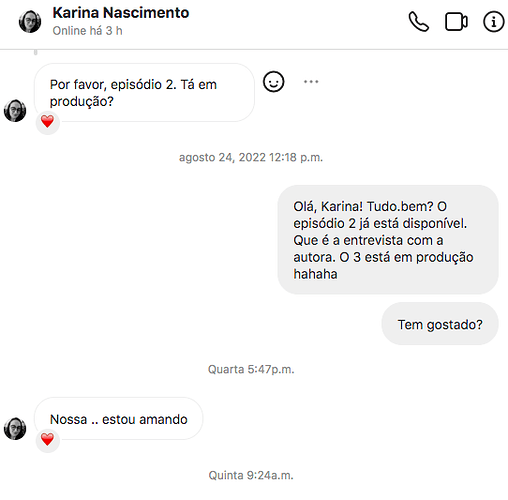 .
.
That’s it guys!
I hope the reports have satisfactory information, but if you need any more information I’m available!