Open Web Sandbox strives to become an incubating space for all newcomers to the NEAR ecosystem. In order to identify the issues in the existing onboarding process of OWS, a two-way approach has been taken. Firstly, two workshops have been organised with an external consultant Ken who worked with NF before on the Guilds onboarding. Brainstorming internally with our team allowed us to come together with help of an external expert and draft the customer journey of a Sandboxer the way we see it internally as moderators. Secondly, to gain a perspective of the contributors themselves, we have launched a survey asking them to identify their pain points. In this way, we hoped to get a clear vision of the most problematic aspects to improve our onboarding processes.

We believe that many lessons can be taken from this report by other NEAR entities who are working on user onboarding and therefore we are excited to share what we have learned so far.

Workshops on the Customer Journey

The survey was launched for a two week period.

Questions posed in the survey can be found here. In total, 148 sandboxers have participated, 14% of which were total newcomers who joined less than a week before the survey was launched, 27% joined less than a month before the launch and 59% of the participants have joined somewhere in the period between 1 and 6 months ago. It is important to make a distinction between these groups of participants because on the one hand, in the period of last 4-6 months our internal processes became more complicated but on the other hand, we have made a significant effort to smoothen out the first experience with OWS (e.g. our own website with all essential information gathered in one place has been launched in November).

How do people find out about OWS?

As it can be concluded from the graph below, the majority of 41% of participants were referred to OWS through word of mouth (additionally, the ‘other’ category mainly represents the same option). The second place of 18% is given to the official sources on the NEAR website (could be either an OWS landing page or other mentions of OWS on the website). Social media influence is divided between Twitter and Youtube with 17% and 9% respectively. 7% of participants heard about OWS during online NEAR events; last 2% are evenly divided between Google and NEARСon. 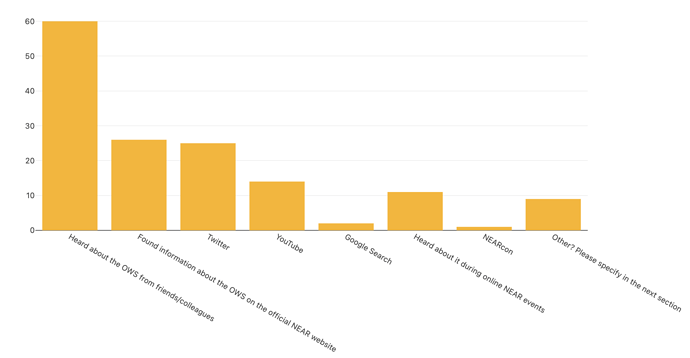 Why do people join OWS?

This question allowed participants to select multiple reasons that triggered them to join the Open Web Sandbox. The most often selected ones were the will to know more about the NEAR ecosystem, attempt to find a way to apply the participant’s talents within the NEAR ecosystem, earn some NEAR and to learn about blockchain technology. All in line with our slogan - ‘Play, learn and earn’. 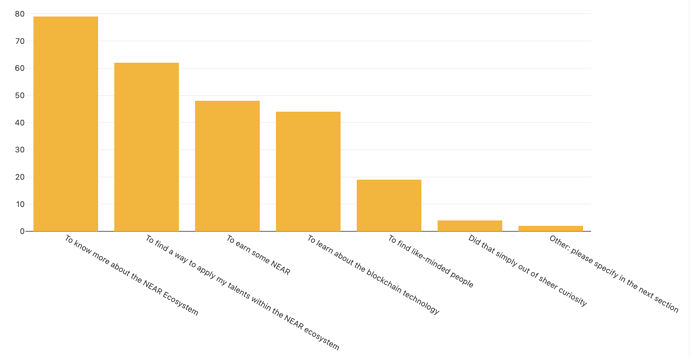 What tasks do contributors complete within the OWS?

The 27% of participants who haven’t completed any tasks within OWS yet haven’t done it for the following reasons: 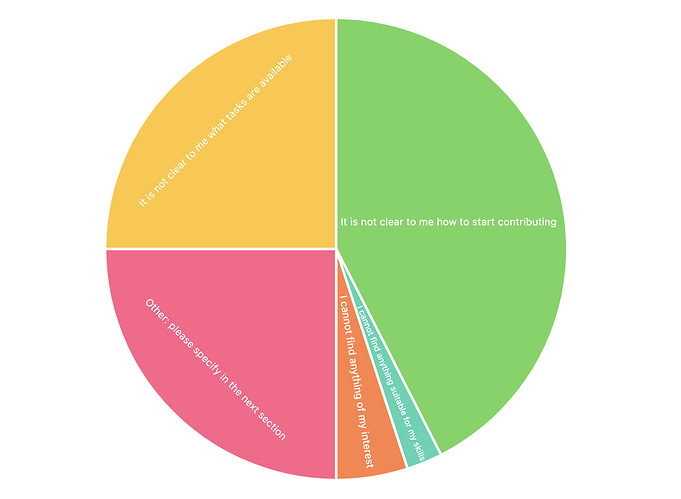 In the ‘other’ category participants mostly filled in that they have only just joined and haven’t yet figured out their way around offered opportunities.

How easy is it for contributors to get onboarded to OWS?

95% of participants considered themselves being successfully onboarded to OWS at the moment of survey participation. However, only 55% says that it was pretty easy for them to find their way around when they first joined the OWS. 28% claims the experience to be relatively easy while 20% and 4% find it slightly difficult and really difficult respectively.

When asked about the difficulties they have encountered at the beginning of their Sandbox journey, the following issues were selected: 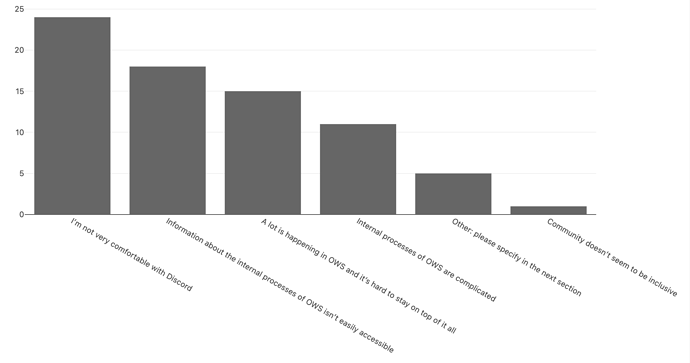 The distribution of issues experienced remains unchanged regardless of when participants have joined. The graph below includes exclusively the participants who joined from one week to one month before the launch of the survey (after the OWS website was launched): it is clear that a lot of people struggle with Discord as a platform and it appears to be an obstacle even after the launch of our own website.

Another factor that complicates the onboarding process is the complexity of internal processes of the Open Web Sandbox. In addition to that, according to 18 participants, the information about those isn’t easily accessible.

The ‘other’ category echoes the result shown in the graph above: participants stated that there is a lot to grasp around OWS and it’s not an easy task.

What are the solutions? 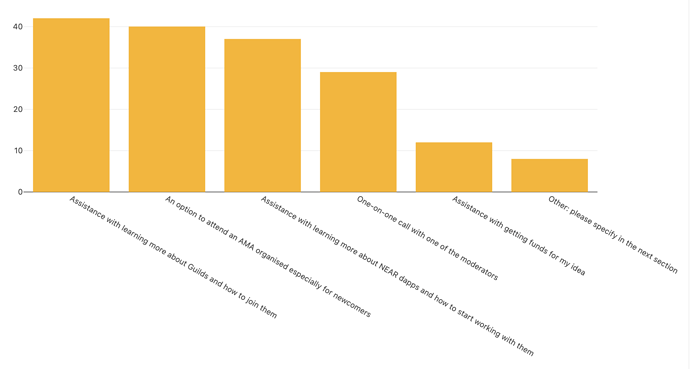 The ‘other’ category includes participants suggesting to avoid using discord as a main communication channel and limiting the number of communication points - “Three or four different ways to follow up and to be up to date is kind of confusing and time-consuming: NEAR channels and forums, OWS, discord, social media (Twitter, telegram)”.

What goals do Sandboxers chase within the OWS?

Here participants were asked to select goals for their future within the OWS; the breakdown of these can be found in the graph below: 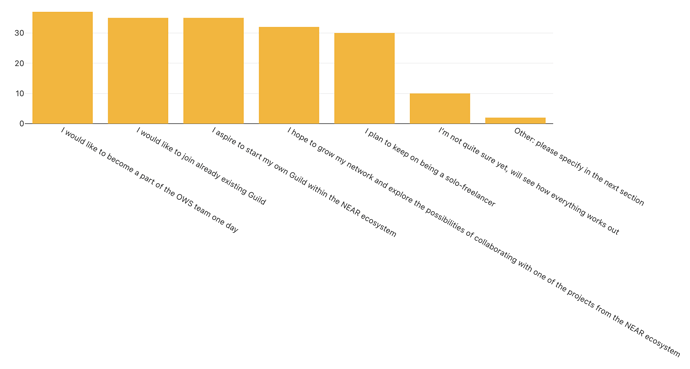 While it is clear that the vast majority of Sandboxers have far-going goals that include either joining a guild or project or starting their own guild, almost a 1/5 of all contributors wouldn’t mind keeping a status of the solo-contributor.

An interesting correlation has been identified between the type of tasks performed by the participants and their long term goals in OWS. it seems that contributors who mainly complete basic tasks from the list of the rolling opportunities are more interested in being solo-contributors (in purple). Contributors who already participate in tasks related to projects and guilds (in blue)- are the ones more interested in joining a project or guild in a long run. 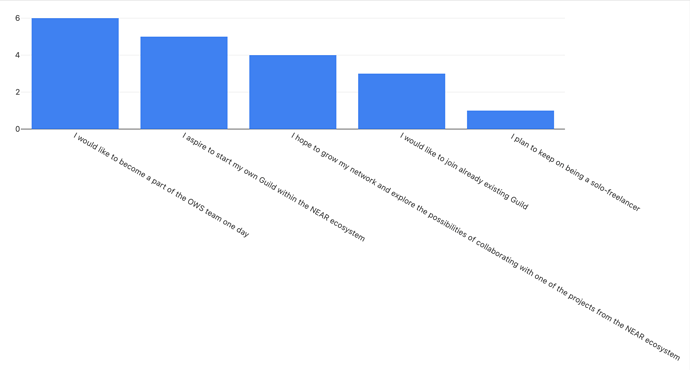 In December OWS team participated in a ‘Customer Journey’ workshop where all members brainstormed around the flows and flaws of the onboarding journey of potential Sandboxers. This survey confirmed the bottlenecks identified during the workshop: a lot of people get avalanched by the amount of information and opportunities OWS has to offer and get confused about what to do after they join. For some newcomers, it is simply unclear what the next steps are after they join Discord/fill in the contributor form.

Besides, Discord seems to (still) be a major obstacle for many users.

As a team, we are happy to see that the majority of participants (83%) find their onboarding experience either pretty easy or relatively easy. However, there is still the remaining 17% that desperately need assistance when joining the Open Web Sandbox. The aforementioned issues seem also to prevent contributors from completing tasks available in the OWS.

Seeing as word of mouth is the main driving power before the acquisition of new users in the OWS, providing a seamless onboarding experience becomes even more important. The introduction of our mentorship program and potentially other measures such as monthly AMA for the newcomers will allow us to optimise the existing onboarding process and offer a smoother experience.

As for the division of completed tasks, we can see that even though only a small share of contributors completes tasks related to projects (this is due to the limited offer on one hand and the skills necessary on the other), this share of contributors has a huge value to the ecosystem (as these are contributors who have more sustainable future goals within the ecosystem). This brings us to the thought that our team might need to shift the focus even more towards working on the projects (vs rolling opps) and people who are willing to participate in those.

If anybody from the community has comments or suggestions, please do not hesitate to share them in the comments or reach out to me on TG: @vrdoingthings