Report for the past month and budget for the next. From melodynft.near

Because It is the most popular among artists, collectors and influencers. I currently have 4750 readers.On my Twitter you can find around 50 posts about NEAR every 6 days. 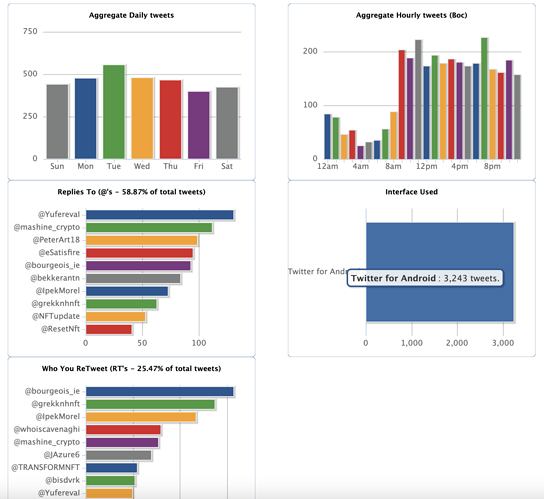 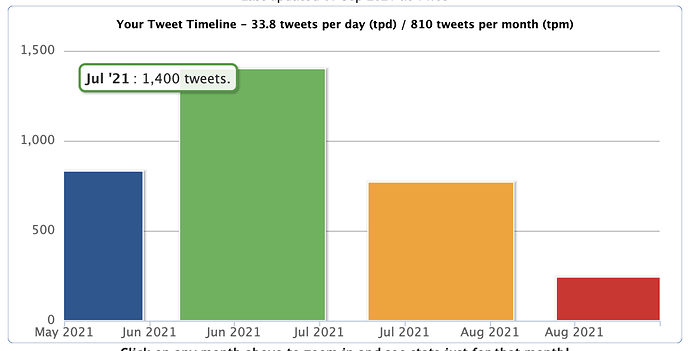 When we entered with Valentin Near ecosystem, and was talking in near protocol chat about importance of supporting artists and nft space, we recieved negative feedback from community. We organized auction on mintbase, and recieved NO support. We organized Nft giveaways (motr then 1500 nft) to show that this is very effective. This nft giveaway brought a lot of new people to Near community. Also to our transform chat, which was very different from all chats in russian speaking community. Our rules was support and positive vibes (btw, i was banned in one of the ru chats for positivity, happy smiles and gifs.) After fighting and emotional talk in near protocol chat about importance of art and supporting nft artists, we finally recieved fund from Community Dao (2000 Near).
I organized an experimental DAO with ‘‘scholarship’’ to train and support artists. They minted on NEAR NFT platforms and posted information about their work on their social networks. I invited most kind, talented and supportive artists from nft community, that i’ve ever met. They were already successfull on platforms such as Hice et nunc, fnd, opensea etc. They trusted me, and was agree to try new, “dead” platforms. We together created warm, lovely posts about near in twitter, made tsunami retweets of their art. All these artists are SOULS of Nft community, with big, real and warm audience. We helped new artists to open their wallets, teached them about near platforms, etc, talked about Near in group of Hice et nunc fans called Hic Shit. All nft community was “bombed” with Near mentions. I guess, that movement in nft space that we created with Valentin was so effective, that, as i noticed, a lot of curators appeared. A lot of new art guilds and twitter accounts related to nft in Near platforms. I saw statistics of Near mentions in twitter. near was last month on the second place after bitcoin.

At the time of the “scholarship”, everyone was paid 150N for a month.

In the group “Crypto Shit” on Twitter @DigitalGyoza was inspired with near. He became the Top 5 seller on Paras 2.0 and founded along with @JAzure6 group “NEAR to the MOON” where we add artists who are minting on NEAR.

At the same time I created a telegram channel Telegram: Contact @melodyunicorn where we was sharing ideas, posting our works for retweets and discussing them. We also talked about things like life and crypto and DAO. Inspired each other with positive vibes and spreading love to Near protocol. We was doing our best to create a warm community. Our goal was to gather more and more NEAR enthusiasts.

Also I started to develop my INSTAGRAM profile where I do posts about NEAR and my life. 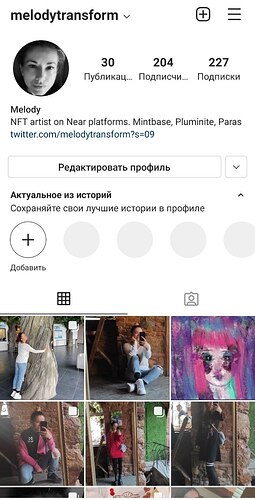 I am helping Valentine with texts, translations, editing, chats, participating in ZOOM and Telegram meetings devoted to the development of the ecosystem.

I’m an artist. My work is on mintbase and pluminite.

I also created a collaboration with Animem, a series of UNI’s. I helped Valentine organize and develop CITY NODE in Mukachevo.

Last month we were given 2000N on art.sputnikdao.near

The rest of the money (i mentioned 10 artists, but 2 of them was busy at that moment and couldnt join) (300N)I spent in the NEAR ecosystem and on the purchase of the NFT. My collections can be viewed on mintbase, paras and pluminite - melodynft.near. Also, I spent my own money to buy NFT.

I spent my salary on my life needs and for setting up an office.

I am taking responsibility for the community, I am working daily around 10 to 15 hours without days off.

We had already applied for the same funds to NEAR for the next month and received feedback from the consuls that it is a lot. NEAR “grew” and the funds need to be “tie” to the dollar.

Tasks for next month:

All the same as last month, plus we want to add a clubhouse because we are planning to do discussions about NFT, DAO, NEAR, WEB3.

We will also add new artists who have already trained and want to continue working with NEAR from students to full DAO members. I want to teach them to submit their projects independently. Also we want to countinue to teach online new artists how to mint on near platforms, and provide minting workshops in our local citynode.

The first month ‘‘scholarship’’ system with NEAR we want to leave unchanged, which will be 50 Near per person.(because near grew up.) I consider this program to be a great success. I ask you to allocate 2000Near (17600$ ) for my project for the next month. I myself will decide which artists to encourage and invite to cooperation. Please relieve me of reporting on gov forum as I believe that the art direction does not accept such an approach. I created closed telegram group, where all counsils can see all reports that they want to see. And also as I know that it was Valentin and I who created the art and nft movement on near platforms and in social media, and proved its effectiveness, I have the right to ask you to entrust this project to me. @chloe @grace @3UN1C3 @jlwaugh All participants of my project - 150 Near per person (1320$) Melodynft.near - 500 Near (4400$ ), student 50Near (440$). Total 2000Near (17600$). Rest of funds will go to next month if they will be not used.

U can write your proposal HERE))))

I’m an artist creating NFTs for several platforms. Last month I started creating for the Mintbase platform and I minted 4 artwork and made some sales. Today I have 6 pieces in total that I created for this platform.

In August, I began a totally new NFT project called “Legendaries” exclusively for the Mintbase platform. It’s a long-termed project for me and I’m enjoying doing it. I’m sharing all my NEAR artwork on Twitter and Instagram. Besides these social media platforms, I’m sharing them on my website, Behance, Pinterest, and LinkedIn with a link to my Mintbase artwork.

According to Twitter statistics, I posted 18 tweets about NEAR and Mintbase in the last 28 days. My tweets received 19928 views and 730 engagements in total. I also gained 270 followers. On Instagram I shared 4 posts in the last 30 days and received 507 views and 111 likes in total. 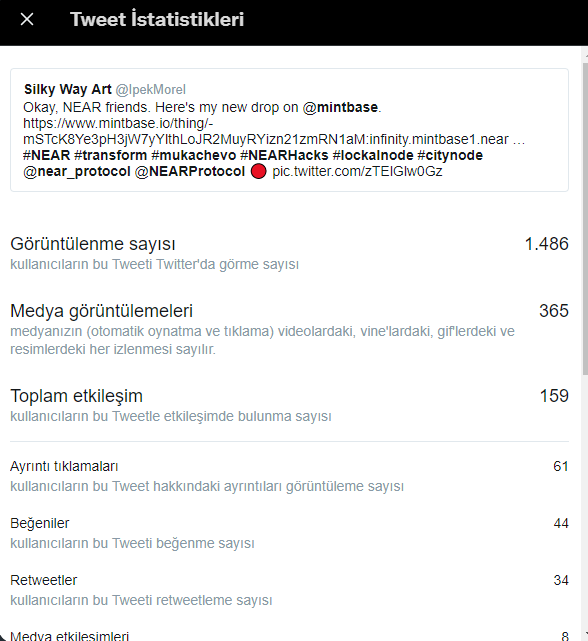 I tried to draw attention to the Mintbase platform on Twitter mostly and I guess it worked out nicely. I RTed NEAR artists’ artwork and tried to make them visible. I have many Twitter groups in which people were curious about NEAR and the platform. I got in touch with a friend I collaborated with a couple of times on ETH-based platforms. I told her about NEAR and the Mintbase and caught her attention with the split option. I’m very happy that my old collector from other platforms bought my artwork on Mintbase. I also saw some friends minting on NEAR platform. This shows that people are looking for new opportunities.

My plan for September is to keep creating new artwork and growing my portfolio in a long term.
I am intent to mint my collab artwork on Mintbase, also I’ll encourage my followers to join NEAR platforms. I’m pretty active on Twitter. I have a giveaway plan to attract both artists’ and collectors’ attention to the platform. I’ll give away my artwork to those whom buy one of my artwork on Mintbase. Also I can do a free giveaway just for drawing attention.

I already connected with Showtime twice and asked them to add NEAR wallet and Mintbase to their site. Now they know that there’s a demand for this matter. I hope it’ll attract their attention and all NEAR platforms will have the chance to get represented on Showtime. I also got in touch with Cyber gallery and asked them to add a NEAR wallet to the gallery so that we could all create a gallery with NEAR artwork in it. They said they would look into it. I think these are great steps for NEAR to show itself to the world.

I hope NEAR community will grow in time and I’ll try to do my best to help with this. For this effort I want to request a of at least 150N.

We will also add new artists who have already trained and want to continue working with NEAR from students to full DAO members. I will teach them to submit their projects independently and to evaluate their work in proportion to their efforts and time spent. Also teach them reporting by working with gov.near.org.

The first month ‘‘scholarship’’ system with NEAR we want to leave unchanged, which will be $350 per person. I consider this program to be a great success.

Dear Melody, in your initially payroll request Valentine was talking about 8 artists in September vs 10 in August. How many artists in your group actually? Could you please provide list of them?

All the same as last month, plus we want to add a clubhouse because we are planning to do discussions about NFT, DAO, NEAR, WEB3.

Could you please share the link, a want to participate in the clubhouse room?

Also, I want to request a “compensation” budget (150N) for the unpredictable costs or interesting new projects. If these funds we will not use in the month, they remain in the budget for the following month.

Sorry, what do you meant ? unpredictable costs 150N ~ $1500 ? Could you please show your July and August budgets? How did you spend money?

@Melody i confused, why the artist pays 25% royalty to your DAO?

Look at here: an artist minted a NFT, you bought it (on grants money) and 25% of royalties came on your with brother (@INFINITY) account 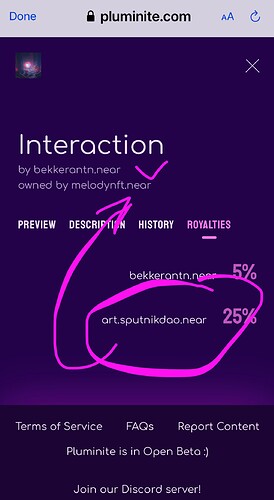 Thank You and have a great day!

I made 4 arts in 3d and minted it on https://pluminite.com.

Found only two, but they are great anyway. 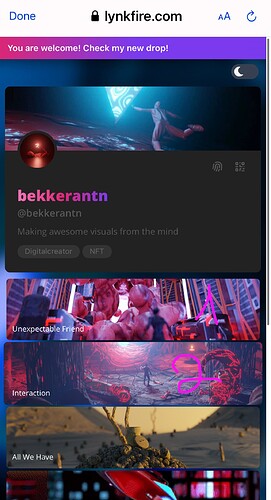 I consider 40N to 70N to be a suitable offer, which is why I dedicate myself fully to this project. Since generating a large amount of NFT and trying to move them by all means requires many hours of work in front of a computer

Just my opinion: NFT platforms were created for artists and buyers. It’s a great idea pay to famous artists, as a part of marketing strategy when a NFT project is growing up, but it cannot to be constantly.