Hello everyone! Implementing the new initiative that together with the community squad we call “NEAR Spaces” on the Discord server, we have seen an increase in the engagement and activity of our community.

I started doing it with the NEAR Meerkat Kingdom collection team, where almost 60 users joined, it was a great number for a first event.

Then I did it with NEAR Tiger Academy, another NFT project, where less people joined but we were around 45-50, but it was very entertaining.

The third one was with Metapool, a liquid staking protocol that’s boomin nowadays, it was very interesting because Claudio, the co-founder of Metapool, is a very wise person and he knew how to express very well all the questions that I and the community asked him.

Yesterday I did the last one so far, with Metamon, a P2E gaming project which launches very soon. I recommend everyone to check it out. The co-founder, Spaceoddity, gave a brilliant talk about his project, first of its kind in NEAR and most probably in my opinion pioneer of P2E in WEB 3.0. It was attended by an impressive quantity of 110 people, most of whom stayed to listen to the whole event, it was very entertaining and fluid, I am proud of what we are doing as a team to achieve mass adoption, go NEAR!

I would love to hear recomendations, opinions and ideas for Discord! Cheers! 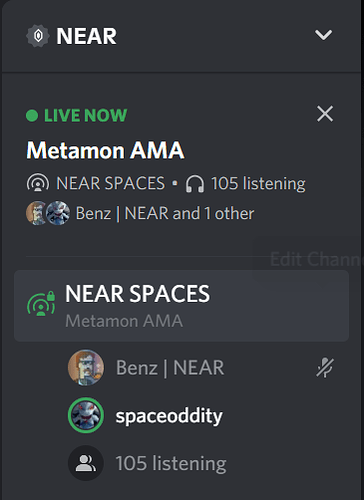 I would love to hear recomendations, opinions and ideas for Discord! Cheers!

Would be neat to collab with the projects which join for AMAs to create a quiz and leverage that quiz bot post AMA. If you include information which is only accessible in the AMA in the answers to the quiz, we might be able to retain attention and encourage listeners

wow this is a great idea David, i´ll definitely think about it and try to figure out how to make this work perfectly, thank you!

Hi Benz,
Thanks for your effort!

It’s great to see more and more people joining and interacting with the Discord server.
One suggestion is to ask the project to make an AMA recap in words (short & sweet in the project medium, like ama format in telegram) so everyone miss our AMA can catch up later.
The purpose is letting people know more about our Discord Ama after all.

Hey Benz, are these recorded and uploaded somewhere for people who were not able to attend? Thanks! @Benz_Near