First off, Happy #NEARvember folks! October was probably our busiest month so far, we built a lot of new connections, kickstarted a bunch of new initiatives and found ourselves taking on a host of new experiments too. Time does fly! Here is a summary of activities:

We kickstarted the NEAR Hub project along with Orztirr Studio initially as an experiment but it evolved into something much bigger than we had initially expected. It is now a full fledged community project and we found it very hard to keep up with all the developments within a closed group. Hence we decided to launch the NEAR Hub DAO, which will oversee the development of this initiative and help us manage it much more efficiently: Introducing the NEAR Hub DAO

Business on NEAR DAO:

Learning from @Rejinderi’s success in talking to Shannon Code, Lead Developer at Emblem Vault (emblem.finance) and convincing Circuits of Value (circuitsofvalue.com) to move to Aurora/NEAR led us to the conclusion that instead of working in a silo, we need to synchronise our onboarding efforts with the larger ecosystem’s success in order to do justice to the efforts and have a more structured approach to project onboarding. Hence we have decided to channel all such efforts by NIA’s Mercantile Caucus to the Business on NEAR DAO which has been set up as an Ecosystem DAO for this very purpose: Introducing the Business on NEAR DAO
Emblem Vault should be deployed on Aurora fairly soon and a host of other projects are also on our radar and we are constantly educating them to migrate/expand to NEAR.

Road to NEAR Intelligence Collective:

We are well on the track of evolution, growing from NIA to NIC as we DAO’ify our initiatives and start setting up a family of on-chain niche units under one umbrella.

We started NEAR Intelligence Agency as a Warpspeed Guild to supercharge our launch and facilitate faster scaling of NIA activities and to allow us to move aggressively towards our goals. While we will continue to experiment, engage, explore and evolve - our goal is to have NIA positioned as a key, indispensable component in the NEAR Ecosystem, with a product-suite, service-range and governance of its own. The long-term plan is to replace the NIA as the main organization, effectively making it one of the many sub-units contributing to the broader NEAR Intelligence Collective (NIC) group of sub-DAOs.

The NEAR Intelligence Collective (NIC) will eventually replace the NIA as the parent guild to a host of contributing sub-units (Mercantile Caucus, NEAR Hub, etc) that will all work along side NIA - under the NIC Guild. This will be a completely new experiment where a guild reorganizes itself to spin up more individual sub-groups, each focusing on different set of activities but all working together, under the new umbrella. We will keep working under the NIA banner till we have the NIC ready to be instituted.

Some necessary steps would be:

Grateful to everyone from the NEAR Foundation/Core who has been guiding us and for the constant support. Looking forward to an even more productive November and months to come. We love brainstorming on all things NEAR. Please feel free to reach out to me at t.me/chronear and let’s chat about NEAR!

6 Likes
Join us in NEAR Data Center Open Discussion
Introducing the Business on NEAR DAO
Dacha November 2, 2021, 3:22pm #2

1.Could you please show information about guild expenses in October by wallet?
2.Could you please describe your team, their responsibilities?
3.What is your salary vs guild members?
4.What the link on your guild’s DAO?

Just briefly describe why they got money, what kind of work they did. 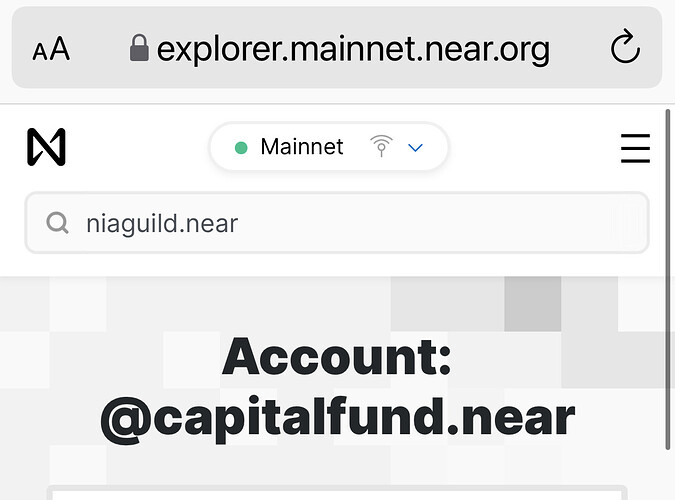 At least 1000N save in pull on this wallet and more than 2000N staked on gulid’s wallet.

Thank You very much.

Please assume the best before devolving to accusations like this. Remember that the forum is open and accessible, I think images of this kind are unhealthy to the ecosystem.