Monthly Active Developer passed 1000, reaching 1250! NEAR has announced multiple announcements, partnerships, and grants programs as well as NEARCON, all attracting developer attention to the ecosystem.

From the breakdown below, we can see that the DeFi landscape at NEAR is active in that ref, skyward and metapool all ranked on top 15 list. In addition, learnear.club is contributing over a thousand of account creation referrals from previous weeks. Bridge and Aurora also showed more activities and gained more attention. 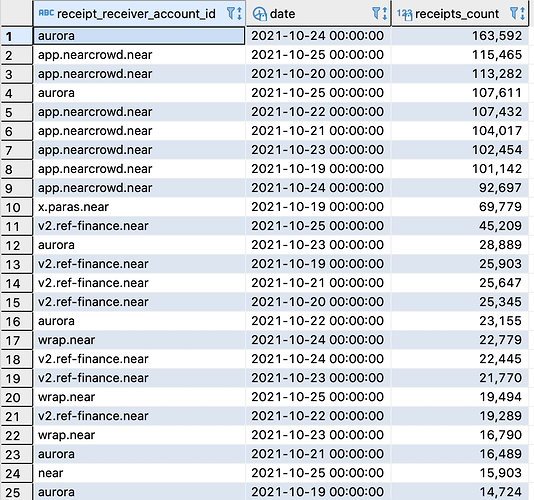 Daily transactions maintained at the level of 200k most of previous weeks but spiked to 350k by the end of last week.

From the contracts breakdown, we can see that the spike was mostly because of the Aurora contract, showing that Bridge and EVM have been actively utilized.

1600×540 41.3 KB
We have an average around 40 new developers started exploring NEAR on CLI in the past 2 weeks, a level that is higher than our previous average.

1600×540 59.7 KB
Weekly active developer and dev-deploy/deploy increased all the way from 300 to 500 and 150 to 250 respectively. This aligns with our recent increase in MAD, again showing the recent announcements in NEAR Ecosystem was able to successfully attract developer’s attention and engagements. 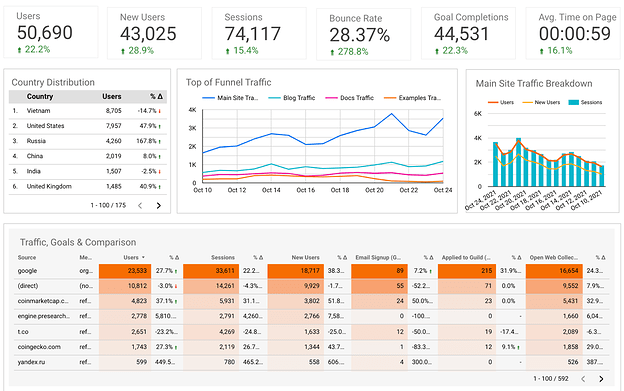 From the country breakdown, we can see that traffic increases are mostly coming from Russia, United States, and UK instead of mostly Asia. This is a positive sign in NEAR attracting attention from all around the world more evenly.

From the traffic source breakdown, Google experienced a steady 28% increase, contributing to most of the traffic. In addition, we can see that a new source has popped up, https://engine.presearch.org/. In addition, because of the token price increase, traffic from coinmarketcap and coingecko also increased greatly.