Introducing Warpspeed Guilds: What and Why?

Recently, 4NTS has helped launch two waves of guilds to jumpstart development in the NEAR Ecosystem: 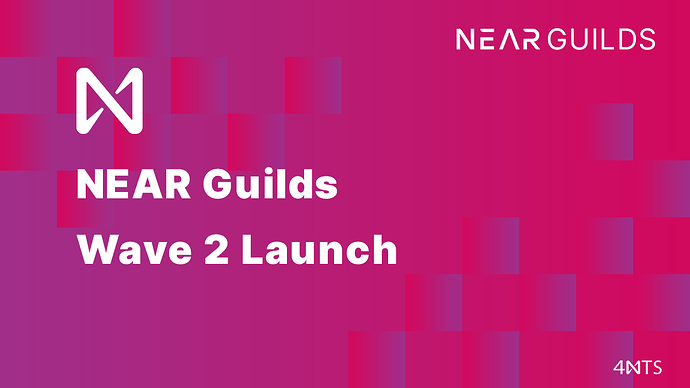 A Second Wave of NEAR Guilds Launches:

Here is What You Need To Know

These Guilds, known as Warpspeed Guilds, are funded around a special crypto-native funding model that focuses on sustainable growth, consistent production, and long-term engagement in the ecosystem.

In short, the NEAR Guilds program is multi-tiered for the purpose of appealing to different audiences:

Some guilds and guild founders may not have the bandwith to be ‘full time’ on their specific guild, or they may be new to crypto and facing a steep learning curve. Thankfully the NEAR Community Team is in the process of building some great infrastructure to accommodate these people - primarily pioneered by @shreyas and @mecsbecs @jcatnear (hope I am not forgetting anyone) ! In this structure, Guilds will be provided the freedom to request support from different DAOs launching in the ecosystem, and grow at their own pace.

Slightly different are Warpspeed Guilds. Warpspeed Guilds are Guilds that I have recruited for the sole purpose of actively and consistently building out the NEAR Ecosystem by offering a host of services to all of the different communities, projects, and DApps built on top. We have launched just over 10 Warpspeed Guilds ranging from NEAR Legal Guild, to Swine Guild, to Inc4, and the Silicon Craftsmen.

I’ve taken ownership of this guild model as a means of expediting ecosystem development, recruiting crypto natives, and providing much needed services to bootsrapped projects in the ecosystem. For more on the fun race Ecosystems are in see here: NEAR BELT AND ROAD: Building Bridges on NEAR As A Strategic And Necessary Development Play

Because these guilds are expected to perform on a regular basis, and deliver results according to their roadmap and specific service niche in the ecosystem, we are supporting them slightly differently:

While these Guilds always have the opportunity to Opt into the other Guild support structure via DAO, I have recruited these founders with a baseline model in which they will eventually be put on a fixed 2.5k NEAR per month rolling support structure regardless of price - bear or bull. While these guilds will start at 1k per month and incrementally roll up, remain the say, or drop (1k - 1.5k - 2k - 2.5k) - based on the first four months of their performance - the goal of these guilds is to ultimately seed long-lasting talent, services, and community in the NEAR Ecosystem. The baseline is a crypto-payments model that sets their rewards in $NEAR token, and sees $NEAR Token as its own value (not compared to existing fiat).

A Short Recap Of Where We Are Now:

12 Warpspeed Guilds have Launched – they are actively developing in these early days (and in spite of a bear market) to be in position for when we do return to a bull market. For now we are not accepting more applications for warpseed guilds, as the primary task at hand is to ensure that the current ones thrive (and if you have followed any updates from nearguilds.com - they indeed are thriving).

In the future, we will be trying to work with the NEAR Grants Program, and possibly even the Open Web Collective (Cameron @Cameron (?) and Mimi (@mimi0127 ) respectively to see if there are additional options for these warpspeed Guilds to get further support as they attempt to rapidly grow and onboard new members and talent from around the Ecosystem.

We have guilds and within the guilds program we have warpspeed guilds. To be a warpspeed guild you need to be comfortable with a more rigorous, fast-paced, production-oriented model with a long-term commitment to the NEAR Ecosystem! This is not to say that other guilds are not this way – they very much can be !!! This is just to clarify for the many curious onlookers, why these 12 specific guilds are motivated and supported slightly differently - at an expedited model - and with higher expectations.

DM me @ozymandius1 if you have any questions on warpspeed guilds and what our goal is with them. I’ve told this to our different talented Guild leads, and I will reiterate it here:

We are launching these guilds to kick some ass in the crypto-verse, and build out the NEAR Ecosystem to be a dominant L1 juggernaut. And that is exactly what we intend to do!

Thank you, @Ozymandius for this opportunity. #s2-guild (Sankore 2.0) is honoured to be part of the Warspspeed Guilds. We are quite thankful for the support given by @mecsbecs, @shreyas and @Ozymandius for assisting us so far at any given time! It has been brilliant, consistent and effective so far! We indeed are excited to bring the NEAR ecosystem to Kenya and effectively crypto hotspots across the continent.