Hello guys! My name is Paulo Vitor Previatto, but you can call me PV. I’m new to the Writers Guild and the NEAR ecosystem, I got here through my friends @johnfaus and @eliaspintanel who helped with my onboarding. I am a Bachelor in Cultural Production, manager of GARAGE – Espaço de Cultura and artist on call from the city of Botucatu, São Paulo, Brazil.

Currently I work mainly as a producer of the creative economy, I manage the space that I conceived and implemented in 2018, the GARAGE, I am president of the Associação Teatral Notívagos Burlescos, and I am also a theater actor, as well as a musician (singing and choir conducting).

I am very happy to be here with you and thank you in advance!

Objectives: Holding of the 10th edition of the “Soiree of Notívagos” on August 6th, to be broadcast live, also featuring a national call for poems in Portuguese written by Brazilians and the publication of an online magazine, coined on the NEAR Writer’s Guild mintbase.

The “Soiree of Notívagos” is a poetry and dramatic literature soiree that takes place monthly at GARAGE – Espaço de Cultura in Botucatu, São Paulo, Brazil. The event is now in its 7th consecutive and uninterrupted edition, even without funding, it is maintained independently by the members of the Cia. of Burlesque Night Theater, since December 2021. The 10th edition is scheduled for the month of August 2022, for which we decided to seek support from the NEAR Writer’s Guild, in order to carry out a special edition and, possibly, establish a partnership in future editions when interesting and viable for both.

The idea of ​​this project, in addition to funding the event itself, is to hold a national public call for Brazilian poets to submit their poems (in Portuguese), to be read during the 10th edition of the soiree and also to be compiled in an online magazine, which will be minted in e-book format on the NEAR Writer’s Guild mintbase. all in all, We will select 10 poems, each of which will receive the amount of $10 in NEAR/DAI – but to receive the amount, selected poets must create a NEAR wallet, if they do not have one. In parallel with the national call, a bounty will also be held at the NEAR Writer’s Guild, which will include 5 poems in Portuguese with $10 in NEAR/DAI each – which will also be read at the soiree and will be in the online magazine. As the national call and bounty will be open for 19 days, approximately 3 weeks, project completion will need to be finalized in the first week of August.

The soiree always took place in person, but in order to give wide access to its appreciation, both for the poets of the national call and for the NEAR Writer’s Guild, this edition will also be broadcast live on the Youtube channels of Cia’s Teatro Notívagos Burlescos, Garage – Espaço de Cultura and NEAR Writer’s Guild, if they are interested and it is possible. This initiative, in addition to the boost it will receive on social media, will also contribute to the wide dissemination of the event, the NEAR ecosystem and the NEAR Writer’s Guild. And, thinking about the project’s success, print releases will also be sent to newspapers and literature websites.

Below I leave a brief description of the format in which we are holding the soiree:

The soiree can have a free or thematic format, a condition that is directly linked to the date and place of its realization.

The event is divided into 3 blocks, - also called “acts”, in reference to the acts that structure some dramatic pieces - organized in order to build interaction with the public and encourage their participation during the soiree. The first act always features an improvised skit, where the presenters stitch together a series of poems related to the theme of the day, with short scenes and live music. In the second act, the microphone is open to the public, who, through registration, will be able to read their own texts or those of other authors. The third act, on the other hand, also counts on the participation of the public, but this is ended by the presenters with a dramatic reading of a short scene previously selected.

During breaks, the presenters draw gifts, most of which are books that fit the proposed theme.

July, 11th at August, 6th — Promotion of the project on social media.

July, 11th at 29th — Period for receiving poems at the national bounty and NEAR Writer’s Guild.

July, 30th at August, 4th — Selection of the 15 winners, payment and onboard those selected.

August, 5th — Completion of the magazine.

August, 6th — Holding the Soiree and minting the magazine on the NEAR Writer’s Guild mintbase.

80 USD in NEAR/DAI for general event production and bounty, including release of realease and press kit for press and literature sites (payable to pvpreviatto).

40 USD in NEAR/DAI to rent of the space “GARAGE - Espaço de Cultura” for the face-to-face soiree.

100 USD in NEAR/DAI to magazine creation and mintbase process (made by johnfaus).

50 USD in NEAR/DAI to graphic design for social media (made by johnfaus).

50 USD in NEAR/DAI to onboarding of selected poets in the national bounty ($5 x 10 poets).

20 USD in NEAR/DAI to payment of the professional responsible for the online transmission.

Holding of the “Soiree of Notívagos” in August;

Conducting a national poetry bounty, which will include 5 poems in Portuguese at the NEAR Writer’s Guild and 10 poems by Brazilian poets;

Creation of a digital magazine (e-book) with a collection of poems selected in this edition of the soiree, minted as NFT at Writer’s Guild store on Mintbase.

Onboard in the NEAR ecosystem of the 10 Brazilian poets selected for the national bounty, so that they can contribute to the development of the NEAR Writer’s Guild;

I encourage the production of poetry in Portuguese in Brazil;

Expansion of NEAR Writer’s Guild and NEAR ecosystem promotion and dissemination actions in Brazil.

Hello PV! Welcome to the community! Would it be within the scope of possibility for the event to be recorded to allow for individuals in different time zones to view the event at a time convenient to them?

What platform would the social media posts be boosted on?

Would the magazine be published in the Writer’s Guild mintbase store?

I think your project is exciting and would like to hear just a few more details.

Happy to see you joining our guild, @pvpreviatto!

Hello thank you so much! =)

Certainly! The video will be available on the Notívagos and/or the Guild channel, if interested.

Yes, the magazine will be published on NEAR’s mintbase, with 50 copies, half of which will be free and the other half will be worth 2 NEARs (with 10% of the value being for the Guild).

Thanks! I’m glad you liked it!

Glad to be here too!

Good night people! Passing by to report the progress of the project so far. First of all, I apologize for the delay in reporting the project, because right at the time of writing the report, we were just evaluating the poems submitted.
Our team was divided as follows on the dissemination fronts: @johnfaus did the graphic arts used in the project, @eliaspintanel the texts used in the dissemination and research of writers’ websites and literature contest outside NEAR, and I was responsible for dissemination within the NEAR platform. Obviously we all publicize the selection process via Instagram and Facebook as well, with almost daily posts and reposts.
Everywhere NEAR and the Writer’s Guild were publicized. We had more than 60 registrations made at the Sarau. With proposals from various places in Brazil, from south to north. This made us see that the dissemination managed to reach people outside our city, Botucatu, and even in our state of São Paulo. In the final report we talk about who were selected and the evaluation criteria. Including the five selected by NEAR.
The Soiree has already happened, it was on August 6th, at “GARAGE - Espaço de Cultura” and was broadcast online through the Writer’s Guild channel and through the instagram page of our theater group Notívagos Burlescos.
We need to finish the e-book with all the poetry selected and read at Soiree. Remembering that we also need to get in touch with all the winners explaining how the payment will be and how the creation of the Near wallet will happen.
I believe that so far we have managed to carry out the actions quite successfully and we have had feedback from all the selected writers during the transmission of our Soiree.

Soon in the next date I will make the final report. 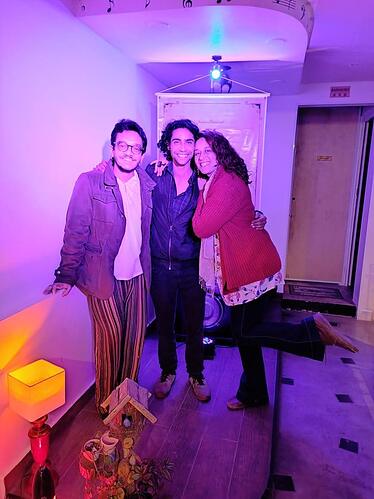 Hello, how are you? I hope well!

It is with great happiness that I conclude my first project here at Write’s Guild. I would like to thank you for this opportunity to carry out the project and get so many subscribers to our soiree of Notívagos Burlescos. We had entries from all over Brazil, from north to south. In a country with more than 200 million inhabitants, it was wonderful to be able to make the projection of the work reach states and locations so far from our city Botucatu, which is in the interior of the state of São Paulo.

First of all, I would like to thank our team: @eliaspintanel who promoted the project on poetry and writers websites, taking the name of Notívagos Burlescos, Write’s’ Guild and Near Protocol to so many other places; @johnfaus who did the graphic work and edited our e-book that is already on mintbase at the following link: Obviously, as I mentioned in the report, we all also helped each other in these steps, doing good teamwork. Thank you team!

The e-book was our last step in carrying out the project. Payment for writers will be made once we receive payment for the project. We have already contacted those selected outside the NEAR ecosystem.

I believe it is important to mention here that the selection of the poems was made by me @pvpreviatto, @eliaspintanel and @johnfaus. It had as criteria: the theme, if the poem talked about the theme or approached about it (poems that didn’t talk about it we ended up disqualifying it); spelling, of course there were proposals and proposals and we took literary aesthetics into account in this; the structure of the text, as some participants sent us prose and even theatrical scenes, which also disqualified some texts, while other texts were placed in very visual and poetic textual structures, which made us take this into consideration as well; the last criterion was the creativity to approach the theme. For each of the four criteria we gave ourselves scores ranging from 0 to 5. We gave our scores separately and then added them up. The poems with the highest score were chosen. Remembering that we had more than 60 registrations!

In the report we didn’t put where the writers outside the NEAR ecosystem were from, but as I said above the selected ones were from all five regions of our country.

The Soiree took place at “GARAGE - Culture Space” with people present in the space and was also broadcast via the Writer’s Guild Youtube channel and the Instagram page of Notívagos Burlescos. In fact, to follow our actions just follow us: https://www.instagram.com/notivagosteatrais/

Thanks again to the Writer’s Guild for this opportunity and to my co-workers @eliaspintanel and @johnfaus. May we continue to take literature and encourage poetic writing and creativity!