Guild Governance: myself and @stanisnear

Hi Everyone, hope you are all doing great

I’m here to present the report of the month of February for our guild and mention what we are working on for the early future.

Seen the very recent update to the Guild System I would like to structure the report following 4 main point: Social media management/content creating + metrics, Knowledge and Translation, Added Value for near and projects onboarding, the future of Near Italia and new founding round

As you know by now our project was introduced to the public having our Instagram page as main point of contact for the Italian audience.
The page was shadowed by Instagram in December and we created a new one, doing a refresh of the content and giving a new more neutral look: 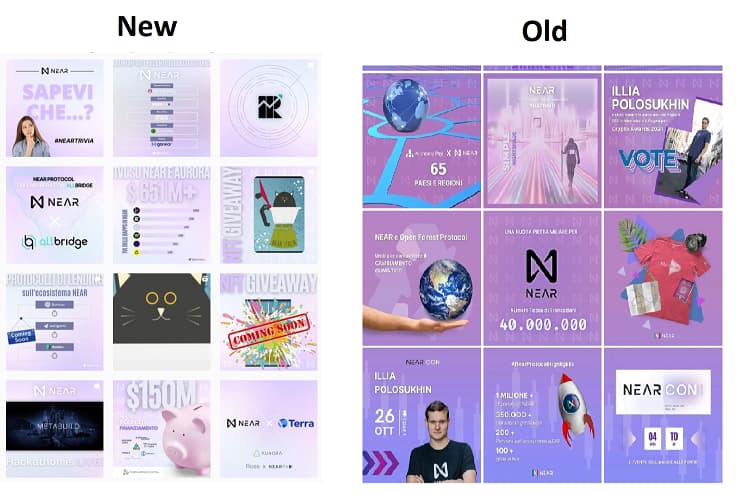 On February we used the founds received the previous month (100$) to support Luigi and Martina in their new adventure on the NFT space. They opened a store on Mintbase and designed the NFT of our Givaway: [thepusher.mintbase1.near - Mintbase Store ](https://The Pusher)

Here is our Cat in an Italian coffe machine 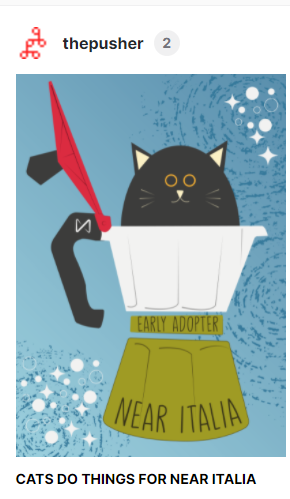 The reel that we published reached more than 3.000 views Near Italia Reel 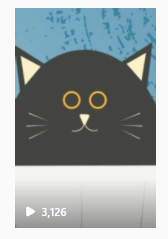 Our Instragram channel grow of 20 members

Our Telegram on the other side is becoming the most active social media, and I’ll post here few stats:

The volumes of interactions usually increase every time there is a big movement of the token but we always reach almost 300 messages p.m.

Here is a February overview of the volumes of messages: 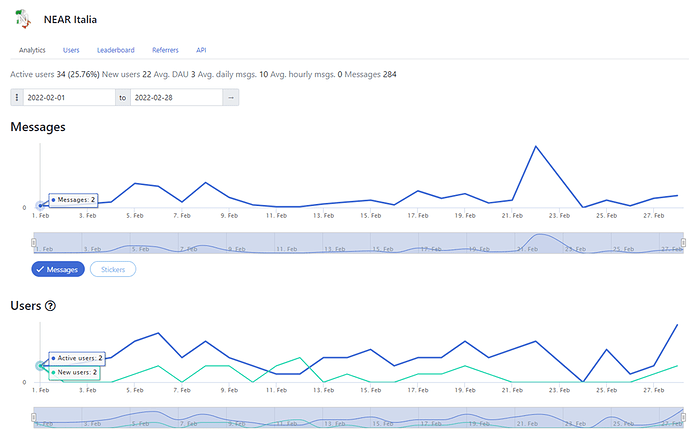 And here are a the most active users overall: 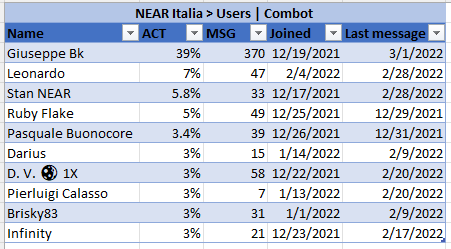 As mentioned in the previous post we are taking care of translating the wallet webpage/script to give the chance to the users to switch language and have as option the Italian version.

@Fitz Evelina is taking care of it and we are correcting the last draft due to the recent changes to the wallet creation. We count of finishing this week and to have the translation ready.

I also created a medium channel where I’m uploading few articles translated by me: 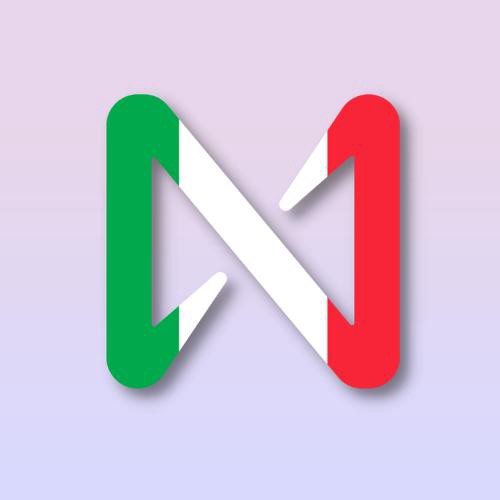 Read writing from Near Italia on Medium. Every day, Near Italia and thousands of other voices read, write, and share important stories on Medium. 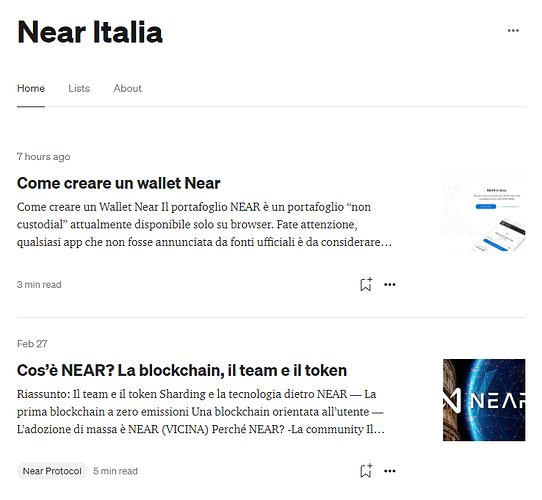 Added Value for NEAR and projects onboarding, the future of Near Italia

The guild is born with the intention to gather the attention of Italians and add value to Near.

With the “onboarding” of Luigi and Martina we already created use cases, where 2 artists created a store on Mintbase shared their concepts of art and started their journey on the NFT space.

Together with Stan and @cryptocredit we had a first meeting with the team of Alberami that I already mentioned in the last “update post”. They are an Italian company that certificates olive trees on the blockchain selling the “carbon credits” to big companies that want to neutralize their emissions. They already write their contracts on other blockchain and they would like to do it just on NEAR.
We are now looking for the right contacts for them and we will soon schedule a second meeting.

The future of Near Italia

As for all the guilds I have been reading the updates posts, from the tiering system to the House of Guilds proposal. I’m looking forward to see the implementation of new structures and procedures because in my opinion that is the only way to build sustainable things.

In this few months I understood that the guild needs to onboard more people. For sure another trusted member of the “council” in order to split tasks and start delegating. Me and Stan are taking care of many different topics and we need to focus on fewer tasks but well done.
It is my intention to start a YouTube channel with few basic tutorials with the goal to produce useful videos like Silicon Craftsman.

Our last founding request goes back to December 2021. We used the founds as mentioned in this post: [APPROVED] Near Italia_Budget_Social Media_Networking_Article Publication

With that founds we also created the DAO: Dao Near Italia

As mentioned before to give longevity to the guild and make it grow faster we need to delegate tasks and for this reason I would like to ask founds for the translations and for the social media management.

For the translations of the webpage of the Near Wallet we were thinking to offer to Evelina around 800$ based on this calculation: the code has around 1.600 Near Wallet open source code
Based on my researches a translator gets average 20$ per hour. In the scenario in which Evelina manages to translate 10 lines every 15 minutes, in 1 h she would translate 40 lines. 1600/40= 40h of work that multiplied 20 makes 800$. Included in this budget, Evelina agrees also on eventually correcting and adding parts to the translation in case the web page is changed.

For the social Media Management as you know I’m taking care of it myself but maybe is time to onboard someone that will take care of all the social medias at the usual standard prices (around 200/250 per social media p.m)

Hi I’m Evelina, and I’m doing the translating of the NEAR Wallet and hope to be assisting the NEAR Italia Guild with preparing and translating in the future.

What the requested amount? Thank You

Hi @Dacha, thanks for your attention and time

I was thinking for Evelina once the translation is done to send her 800$, based on the reasoning mentioned in the post:

the code has around 1.600 Near Wallet open source code
Based on my researches a translator gets average 20$ per hour. In the scenario in which Evelina manages to translate 10 lines every 15 minutes, in 1 h she would translate 40 lines. 1600/40= 40h, this money can be sent to the the Near Italia Dao that I created:
near-italia.sputnik-dao.near. Honestly I never sent the money from there and I should learn how to do it.

And for me I was thinking of requesting request 800$ based on the handling of 3 social medias (Instagram, Twitter and Telegram) + Being a guild leader + creating the Medium page with content translated by me and correcting Evelina’s translation. OFC I would pass for the payout procedure with Kyc.

What is your opinion and the one of the council? Thanks

What is your opinion and the one of the council? Thanks

Agree with you. Thanks

Good evening! Your proposal was Approved on the forum.
Please, follow these steps to get approval on Astro DAO

Here is temporary instruction for grantees who have status [Approved] in their proposals: As soon as you got [Approved] status, Go to the Marketing Astro DAO page Astro and click on big green plus Create Proposal [Screen Shot 2022-02-06 at 10.42.25 PM] Choose proposal type “Propose a pool” then Write a project/guild/member name, briefly description, amount in $, and denomination in N (please, check out the current price on CoinGecko, target wallet, and link on proposal, then Cl…

Thanks for the approva, your help and for providing useful information! I’ll do my best to do the request not later than the end of the day! Here is the Link of the Poll

Thanks for the detailed report!