A metaverse party on our parcel on Voxels featuring musicians from the community, using resources.

We believe that these kinds of events bring the community together, make everyone feel like part of the group and everybody can have a good time. Other than that on this edition we want to feature artists of the community using Tamago to choose and stream songs and reward artists for the use of their music for the party

An event, a wearable for our community, a video recording of the party and a NFT short videos (or gifs) of the party minted at Mintbase.
Spreading funds among

I’ve decided to get the funds from one of the last’s month’s parties that didn’t happen ( I was sick) and use the production fee to make this edition extra special buying NFTs through DAOrecords’ Sound Splash NFT series and tipping musicians on Tamago to use their songs. On top of that there’ll be a DJ set that was for the postponed party, so we’ll have plenty of variety for the event.
Last edition of Make My Day lasted 6h (!) and it was packed, so we hope to have enough music for it, but this time we’ll use decentralized music options.

Due to the amount of work I had to do to compensate for the last month’s delay, the party had to be postponed.

The event will happen on September 16th on Voxels

The event happened on 09/16 and it was great! It were about 6h of party, where we played songs available on daorecords.io (by DAOrecords) and tamastream.io (by Tamago).

We have shared it on our personal Twitter and Instagram accounts and both Tamago and DAOrecords among other DAOs we follow on social media shared the posts to help. Thank you!

We have distributed 35 NEAR to musicians, we’ve bought 10 NFTs from the DAOrecords series called Sound Splash (2 NEAR each, 20 NEAR in total) and tipped on 24 songs on Tamago (15 NEAR in tips) using metaverse dao’s external wallet (metaversedao2.near).

We also gave away wearables and talked about Tamago, DAOrecords and NEAR Protocol, including links to each platform on the parcel wall. 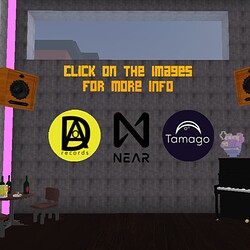 More than 25 artists were rewarded through this event and 2 NEAR dApps were featured!

We exchanged 200 DAI for NEAR a while ago (August 10th) in 2 transactions trying to get a good quantity of tokens since NEAR value was rising (at the time we could buy around 36 NEAR, the equivalence was approximately 1 NEAR = 5,38 DAI)

Learnings:
Doing a metaverse party at a Friday night competes with IRL events, so for the next one we’ll choose another day of the week, probably Sunday.

Many people on Tamago didn’t sign up with their wallets so they couldn’t receive tips and we had to spread among the one’s we could.

The event was incredible… 6 hours of non-stop music.
Next time I believe we will do 7 hours of event.