We, at SABR, are a team composed of young indie game developers that aims to build a passionate community of fellow fans of competitive and community gameplay and creating an immersive world for players on the NEAR blockchain.

We chose to build a game that focuses on community gameplay because we feel that in a world of P2E games that often feels rushed and under-promised, there is an untapped market of gamers that will enter because of its profits and stay because of its gameplay.

As a team that loves games and movies that have a good story to tell, we want to put great focus on world building and lore in Dysglopia. The game is set on a dystopian wasteland. The planet Earth’s terrains are inimical, and all its inhabitants are at its oblivion. Yet, hidden behind the planet’s remains, a new intelligent species, called Gloop, emerged as its dominant inhabitants, mutated from the accumulated toxic chemical GLS or Gellies excreted within all the rubbish remains by the planet’s former inhabitants—the human race.

Gloops mutate from their respective natural habitat. Archival evidence reveals seven (7) types of Gloop as a result of a millennia of continuous mutation including: Hydro, Dendro, Geo, Pyro, Alloy, Toxin, and Bolt. Despite their charming appearance, each type of Gloop exhibits extraordinary skills and abilities enabling them to withstand all threats and foes. Depending on their class and rarity, some Gloops are inherently more powerful, thus will emerge victorious against others.

As the myriad of Gloops wander the remains of the Earth, they were able to build a harmonious civilization, thriving and strong. In time, Gloop civilizations take pride and valor in competing with other Gloop civilizations in an arena where the strongest Gloops triumph, and the weakest perish. 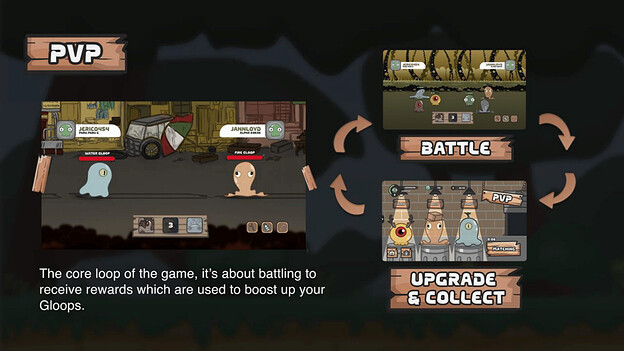 Accessibility is one of our key focal points, we want Dysglopia to be available to as many people as possible and with the speed and low transaction costs of the NEAR blockchain, it only made sense for us to build here. We also have ambitions of attracting a broader playerbase to the NEAR ecosystem.

Dysglopia is targeting crypto and non-crypto gamers by focusing on a proven idea (Clash of Clans) but with our take (everything is entirely original: the story, creatures…).

At the same time, our primary focus is to simplify the way non-crypto gamers start in the game; therefore, without the NEAR wallet connected, players can only play PvE mode with bots, not fully experiencing the game at its fullest.

With all these small things, we can be sure we will be able to reach lots of non-crypto gamers and introduce them to the world of crypto and NEAR Protocol.

We are seeking a grant of 5,000 NEAR as well as a collaborative partnership with NEAR that provides expertise and marketing support to increase adoption on NEAR.

The grant that we seek will be allocated towards the following;

We believe a game like this should be accompanied by a careful planning of fund allocation to create a level of solidity that will attract new users to NEAR.

This performance offers the Dysglopia ecosystem with a solid foundation that includes all of the key layers for creating a universe with amazing long-term development potential.

Launch Alpha on NEAR testnet

Seed Round and Private Round

Is this a proposal to Human Guild?

Yes it is a proposal to Human Guild sir.

Hi sir, did you get a chance to review the project?

If so, what did you think about it?

Seems neat but I’m not in a position to determine the result of the grant, you’ll need to reach out to Human Guild for that. Good luck!