Howdy Y’all! We are pleased to announce that NEAR Protocol is in Austin, TX. During June 8–12, we will host NEAR’s second ever Hacker House, right here in our city! It’s time to activate this amazing community and make some Web3 magic with 5 days of panels, workshops, mentorships, events, parties, and more!

​The NEAR Hacker House in ATX is a weeklong in-real-life event (with digital bounties & activities) from Wednesday June 8 — Sunday June 12 [w/ Co-working + Creation from Sunday June 5th— Tuesday June 7th], with in-person guidance from key industry players in the NEAR ecosystem providing training, mentorship, and acceleration for builders, artists, and marketers. Each night after the Hacker House, there will be an agenda of social and community driven events. 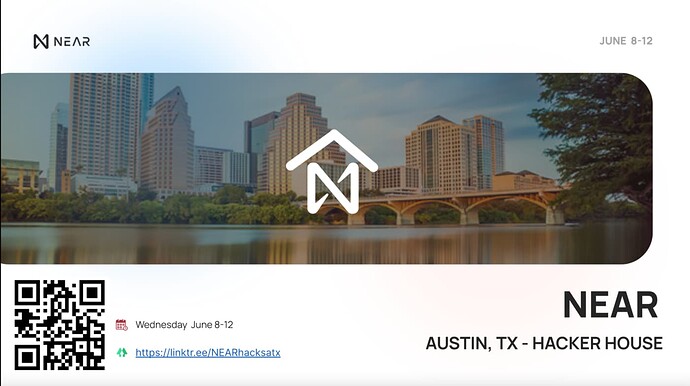 The NEAR Hacker House is open to those looking to build projects on NEAR. Sign up to participate in the NEAR HH here and make sure to check your email for more details & to confirm your participation in the coming weeks.

The NEAR Hacker House mission is to:

Every successful project in the Web3 space consists of more than just developers working together. This is why we have divided the tracks into Development, Marketing, and Art categories indicated by [

] , so that those outside of software engineering can get plugged into the industry and each track can focus on their niche.

We encourage developers of all backgrounds & skill levels to start building on NEAR — if you are a Front End , Rust, Smart Contract, Game, Backend, or Solidity developer, we have resources, workshops, and office hours for you!

Leading up to the Hacker House, NEAR ATX and ATX DAO are hosting 4 Rust Learning Groups for developer’s using NEAR Protocols tools & resources — May 12th, 19th, 26th, and June 2nd. If you are local and would like to join, read this article for the recap of last week’s session to get caught up.

Austin is full of talented and ambitious creatives! If you are one of them, there is a place for you at the ATX HH. Whether you paint, create digital art, make music, or dance — we will offer mentorships, workshops, and networking opportunities to help kickstart your creative journey in Web3. The carbon-neutral NEAR ecosystem is waiting for you, and the NEAR Hacker House can help you find a team and build a community to support your creative dreams in a sustainable way.

Every project needs marketing to reach the masses. However, we’ve found there is a huge gap between traditional marketing in the Web2 space and the nuanced ways of the Web3 space. This is why will develop a track specifically to teach DAO design, ecosystem practices, business development, and much more for those looking to become more proficient in this side of the industry.

Aside from building, the NEAR Hacker House emphasizes productivity, wellness, community driven activism, and fun + is free to all participants who get accepted.

The Future of the NEAR HH [HACKER-HOUSE]

We are also proud to announce the formation of The HackerHouse DAO powered by Astro DAO to be officially set up during the Hacker House in Miami. Here are the objectives of the DAO:

Decisions the HackerHouse DAO will be making:

Voting will be based on a Hacker House token that will be awarded to those who have successfully submitted a project during a Hacker House, organized a satellite event, sponsored the event, or facilitated a workshop/lecture.

The NEAR Hacker House is brought to you by Sponsors, Organizers & Ecosystem partners that will help this weeklong mini hackathon/conference possible. Here is who is helping out so far:

Are you looking to officially sponsor the Hackathon? Sign up and setup your meeting with the sponsorship coordinator here .

If you are interested in having your organization as an ecosystem partner apply here.

Keep Up To Date

Stay tuned with all the action and developments around the NEAR Austin Hacker House by tapping in with us across social media. In the coming weeks we will be posting information about our curriculum, schedule, satellite events, and accommodations.

For all resources NEAR Hacker House related @NEARhacksatx | Linktree