We’ve been getting good questions about how to proceed with implementations of a mobile wallet.

At the moment, let’s focus on the Android and iOS development which will be Java/Kotlin and Swift, what are the needs here.

On the Swift side, there has been some work done in this repository, which is no longer actively maintained: 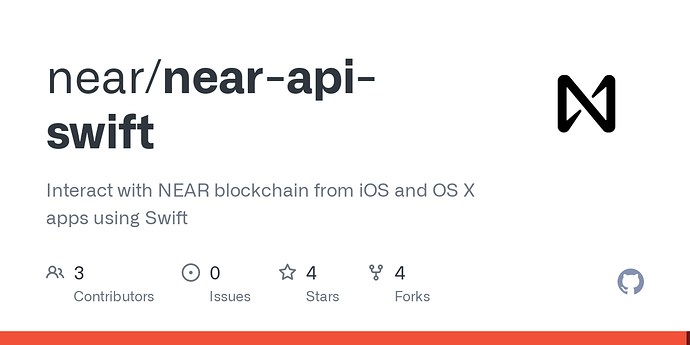 GitHub - near/near-api-swift: Interact with NEAR blockchain from iOS and OS X...

The above repo seems to have implemented the ed25519 curve but not secp256k1. Perhaps these are useful libraries to peruse:

For Java/Kotlin, I have another list here. Some, like one of the Swift links above, use C bindings, so the implementor must be familiar with that process.

For the links from GitHub it’s useful to search for ed25519 and secp256k1 to see if they’re mentioned and if you might need to use two libraries to get both.

There’s an article written in the NEAR docs about creating a transaction “from scratch” that is meant for exchanges and similar folks who need to construct transactions. This is one of those useful cases, and this link will be helpful:

Note that in the above page in documentation, we use near-api-js but tried to avoid using the magic of the functions in order to have the user walk through the process without the helpers.

After a transaction has been successfully signed, we’ll use the RPC API to send them to the blockchain, as covered here:

I’d like to open this thread for other folks to chime in on mobile development and how we might leverage libraries or SDKs.