Hello NEAR Fam, Hope everyone’s doing great! I am Zubair, Part of NEAR Community since about a year. I have been actively contributing to the projects on NEAR and part of some guilds as well. I am currently one of the councils of #onboarding-dao & #community:dao . I have sent out the same campaign proposal in January and had a good result supported by the #marketing:marketingdao councils and the community.

Hello NEARians, Let me start with a brief overview about me & the plan. I am Zubair, A Social media marketer and creative head with 3 years of experience. I had the plan to promote content about NEAR on RVCJ Media since long but couldn’t write earlier, I introduced the plan to @Dacha and he asked me to put a proposal. Funding scheme : Monthly About RVCJ Media, RVCJ Media is India’s biggest Digital Media company, having 40Million+ followers base across all platforms (Instagram, Facebook, Twitt…

For those who don’t know about RVCJ, here’s a brief introduction:

RVCJ is mainly focused on Memes & News and has a good reputation among brands since 11 years of foundation.

Idea to promote NEAR :

The basic idea remains the same i.e. to gain attention and bring non tech savy general audience to NEAR ecosystem and make NEAR as their first blockchain to interact and learn.

With the increasing craze of Web 3.0, I have been seeing people trying to learn about it more and get involved. NEAR offers them a learning platform with many programs such as NEAR university.

The idea is to bring them slowly with easy to understand content like RVCJ have posted before.

I have chosen RVCJ first for this campaign because it is India’s reputed Digital Media company and also have been promoting crypto related content in between. RVCJ has vast amount of audience, from every region and age group. RVCJ is verified on every platform which makes it influential and trustworthy.

Correct answer winners will be dropped with neardrop link to create wallet and claim rewards.

I had a discussion with Shreyas about making the guild and he suggested me to make a community, so I would like to create a community and redirect people from RVCJ to that group and keeping them engaged with the help of some helpful frens in the community.

This would be a community of mostly general audience so it would be a pleasure for me to make them learn about NEAR & blockchain in general by sharing articles, videos and other things including assistance with their questions.

Proposed Budget for this activity :

Thanks Everyone for believing in me earlier, I hope to get the same response from the community this time as well!

Thanks @Dacha always for your guidance, Tagging @marketingdao-council for visibility!

Edit : Sorry I forgot to add that if any project of NEAR Ecosystem wants to reach RVCJ Audience can submit their request here >> NEAR Ecosystem Project Promotion On RVCJ Media

Waiting for your comments @marketingdao-council

Great proposal. Could you please give more details here?

As said above 4 posts related to NEAR will be posted. These will be some general infographic posts and at the end the 5th post will be Quiz post.

The quiz will be based on those 4 posts information and audience will have to answer after reminding the information provided. 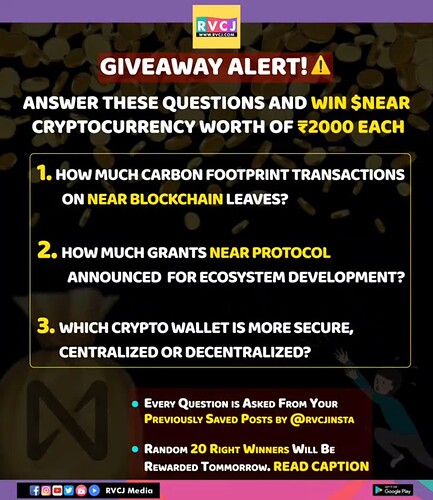 Audience who will give correct answers will be dropped the prize because of their activeness and attentive nature for understanding NEAR.

P.s. - Earlier in January proposal, RVCJ Agreed to drop this prize from their budget.

Let me know if you have any suggestions/doubts

Thank You very much for great job. Happy to support you.

Hello NEARians, Hope you all are doing good & safe! Thanks for allowing me to teach & promote NEAR Protocol to a non-tech-savvy/general audience in India through RVCJ Media. Overall I have managed to bring the attention of millions of people to NEAR Blockchain by posting content in posts & stories on Instagram. I have been putting Links in BIO of proposed accounts & stories by which I was able to get a good amount of visits on the blogs/websites/videos related to NEAR Protocol

Thanks for the support Sir, Really looking forward to keep doing better work!

Great proposal.
But if you could ask admin from near india to pin the same on tg channel and twitter channel.

As its major focus is indian community i suppose the admins from near india community should take this initiative to support your efforts as every small effort matters.

Hi Brother, Thanks for the support!

For sure, I would love to make this initiative better with the support of active Indian contributors like you.

I talked with some contributors and they support.

I am following RVCJ for a long time now and the content and the audience attraction they bring in their way is quite unique. They have a very good impact and reach. Definitely they gonna bring huge attention towards NEAR.

Last campaign was a huge success. Looking forward to the new one.

Thanks so much for the support friend from Conceirge team!

Hi @zubairansari07 thanks for your proposal. Before I can give an answer could you expand on this item please.

Hi, This is the cost of posting on the proposed accounts. You can check the previous report for more detailed info about this.

Hi @zubairansari07 thanks for sharing the link. After looking at the report and seeing the amazing data I am happy to support your proposal.

Looking forward to seeing your next report!

Thank you so much sir!

I am glad to see your support.

Thanks for the appreciation @ProfSnape

Hi Zubair, thansk for your proposal.

Just revisited your February Report for the campaign that ran in January.

I have several thoughts:

As it stands, I am glad we supported the January experiment and I am unwilling to support this going forward. Some recommendations on how to make this workable:

To sum it up; are we paying for content or distribution? Distribution without content is worthless. Please add what content is going to be shared for reassessment.