This month, we continued to grow the presence of the NEAR protocol on reddit. For those of you not familiar with our operation, the following is a quick summary of what we do:

We break our operations down between engagement on the r/nearprotocol and operations in other subreddits. On the r/nearprotocol sub, we post 3 times daily and comment on each post twice. This ensures that the traffic on the sub stays constant. In these posts, we encourage organic engagement by posting important news updates and asking questions. We also host AMAs on the NEAR sub, with the goal of increasing the sub’s subscribers, giving NEAR community members a platform to share their work with a wide audience, and increasing traffic to other NEAR communities. Outside of the r/nearprotocol sub, we post engaging content with links back to NEAR projects. Once a month, we make a concerted effort to get NEAR to the front page of a major sub.

In last month’s report, we set out the following KPIs for Q4:

At the time of writing, here is our progress on each KPI

To get a better sense of our daily operations, here is a breakdown of each member’s contribution.

We have experienced solid growth again throughout the month of October. The beginning of the month started off very strong, with posts that exceeded 30 upvotes each. We are continuing to see a trend of better communication between all facets of the NEAR marketing network, and are increasingly seeing the value. On our high-upvote posts we are noticing an increase in organic engagement as well. Though this is difficult to measure, a cursory analysis of the accounts that comment on each post has revealed an increasing number are by all appearances not under NEAR management. The month-end post will come out November 2nd, the day this is posted. An addendum will be posted after enough time has passed to get a rough estimate of its success. With the addition of new software to monitor posts moving forward, we anticipate an even further outreach with every post.

This month we did experience a good number of posts being removed initially, roughly 3 of 8. I am working to understand exactly what about these specific copies is getting them taken down, but so far it is not easy to pinpoint. Communication with the large degen group has been somewhat difficult as well. There is so much traffic in the chat that it is difficult to get attention on your specific efforts, and to utilize this group to the best of their ability. Overall, however, we are noticing marked improvements in our areas of struggle from last month, and will work to implement strategies to correct problems as they arise.

Working to establish better communication with Lol Son, so that when a post is taken down either he can attempt an immediate repost on a different sub, or I can post it on a burner on a smaller sub with no karma requirement.

Working on creating an estimate for organic growth. This can only really be accomplished by going through the accounts of every person who chooses to comment, but this can be roughly extrapolated to the number of upvotes, and in turn give a slightly better sense of how much external engagement actually exists.

Employing the use of Postpone - a reddit analytics tool. We can begin to roughly track the engagement we get moving forward and see when exactly the best time to post in a certain sub would be. This tool will also help the entire operation.

Finally, I will be coordinating my month end posts to happen earlier in the month, so they are included in the report immediately. This has been a scheduling issue on my end that will be rectified. 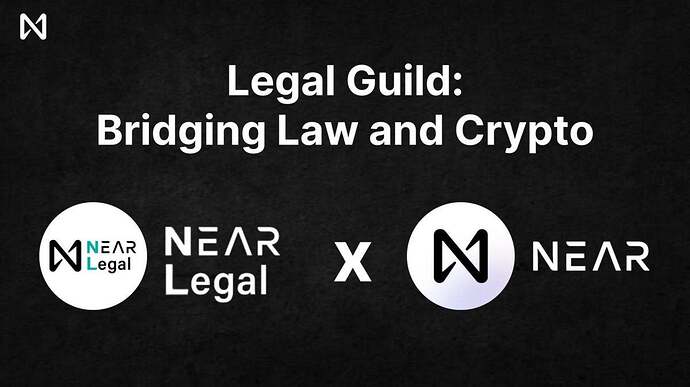 r/legal - How will the law react to cryptocurrencies and NFTs becoming more...

r/defi - The evolution of payment.

The content creation side of the operation is going swimmingly due to a consistent influx of NEAR-related announcements, more established personas associated with accounts, and the increased attention around NEAR overall. As in the past, Çek compiles three posts each day and allows Georgia to disperse them and add a few comments to each post. We have recognized that memes and curated community questions get the most traction and lead to the most organic interactions. For this reason, 2-3 memes (90% coming from Swine Guild, 10% from outside sources) are posted each Monday to continue the tradition of the Swine Guild promoted #MemeDropMonday. Attached are two examples of these types of posts. 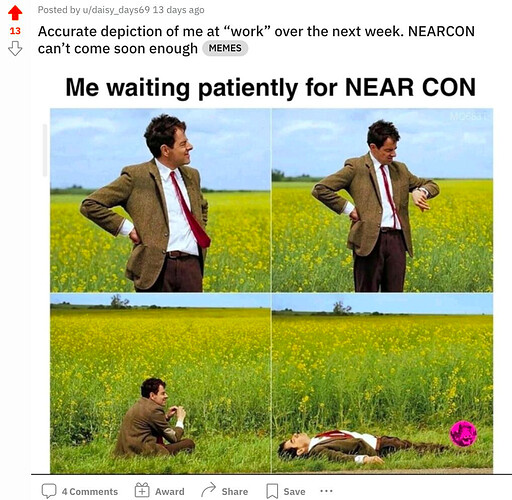 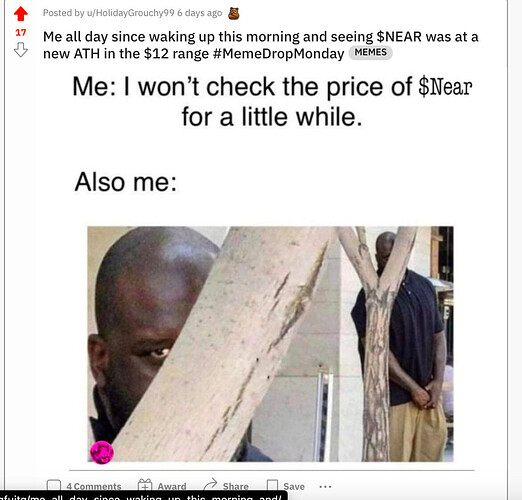 Outside of memes, various infographics are hand-picked and placed on the day’s post schedule for their information to be spread on the sub. Certain content such as NEARWEEK’s newest editions and all news placed in the NEAR Marketing Distribution Telegram channel is shared consistently. Because NEARCON was this month, we focused a lot of energy on building excitement for the inaugural event. Not only through infographics, but also 5-10 posts inquiring about specific aspects of NEARCON and asking other members of the sub-directed questions about it were created in October. A common topic of community member-style posts are centered on bullish predictions of NEAR’s success/potential in attempts to get people excited about what is to come. This was easy for the team to simulate as we are beyond excited about the growth of the ecosystem and the increase in value of $NEAR. Below are two posts related to what was previously described.

Çek has continued to advance the personas of the aforementioned accounts associated with this operation. In addition to some of the characters such as the amateur dev and digital creator/NFT artist, a person making the switch from Eth to NEAR has also been established over the month. We have enjoyed associating fixed personalities and topics of interest to certain accounts as it seems to add another realistic layer to the scheduled posts. Here is a post from the new persona.

With the number of members on the sub accumulating to 3,000 now, we feel that the mission of the Reddit Ops Team has continued to be successful in establishing a spot for a diverse group of people to learn and talk about all things NEAR related.

G has continued to diligently manage each account and do the posting on the r/nearprotocol sub. G is also responsible for accounting for all of the posts on the sub, which can be seen here.

Sue hosted two AMAs this month, one with Daniel Kwak of OIN Finance and one with Frederic Fournier of Open Forest Protocol. The first AMA with Daniel garnered 108 comments and 21 upvotes. The second AMA was posted on a Friday, and is therefore ongoing until tomorrow. It currently has 31 upvotes and 54 comments. The AMAs continue to drive the highest engagement of any of our posts, and we will continue with our plan for two AMAs each month.

In light of our ambitious Q4 subscriber goals, we will be hosting an NFT drop this month to get more people involved in the sub. We are basing our efforts on those of the flying rhino guild, whose viral NFT drop gained over 2k likes and retweets and increased their following significantly (can’t link the tweet because it appears to have been deleted.). In mid-November, we will create a reddit post with an image of an exclusive NFT with 10 copies. Participants must comment their wallet, share the posting on twitter, subscribe to r/nearprotocol (the real goal of the whole thing), and follow @NEARblockchain (or whichever twitter account the core team wishes to promote at the time).

We will consult with a few of the up and coming NFT projects in the NEAR ecosystem to source the NFT. We hope, through this NFT giveaway, to double our subscriber rate in order to meet our Q4 goals. An additional benefit of this giveaway will be the free marketing of an NFT project in the NEAR ecosystem, and increased awareness of r/nearprotocol as a mechanism for increasing the visibility of projects on NEAR.

Employing the use of Postpone - a reddit analytics tool.

Looking forward to seeing the results of this

Great report, guys! I am always glad for help and better interaction!

Keep up the great work! Proposal has now been voted through and funds are available in the nominated walled.

Regarding the difficulty in keeping up with the Degens Telegram chat, I had similar issues a couple months back which is why I created a Basecamp where it is easier to post and keep up content. I’ll add you, hopefully you find this beneficial.