This month proved to have strong engagement across the board. Posts made across reddit saw strong engagement, particularly on highly targeted subs like r/defi. This month made clear that a more targeted and direct approach from my side of the operation may help garner more significant engagement and perhaps lead to more subreddit conversions. Each post made during the week on different subs generally experiences different levels of engagement, but when posts are made and upvotes are bought for them immediately, it leads to a significant increase in organic traffic on the post. The first 2 posts in the series of links below are good examples of this phenomena. Moving forward I will be buying at least 50 upvotes for every post I make as well as using the NEAR distribution network for more targeted comments that lead users back to the NEAR sub.

This strategy will also help address some of the challenges I am still facing in getting traction for every post. By buying upvotes for each post and making each of them significant efforts to get to the top of whatever sub being posted on, it will elevate both the quality and quantity of engagement and conversion. This month has been much better in terms of automodding and banned posts, as I have made a concerted effort to avoid certain language in my copies. The challenges we are still working towards really only revolve around engagement, which I believe this new strategy will help significantly address. This can be accomplished without increasing our budget as the prices are relatively cheap and I believe this strategy will be integral to post success moving forward. This month the strategy of paid upvotes and NEAR distribution resulted in a post with 126 upvotes and 81 organic comments. This post was at the top of r/defi and will be our standard moving forward. We also experimented with cross posting this month as a method to get information from one sub on to another, but the strategy of buying upvotes is much more successful. Overall we are working on a more concerted and focused post strategy which we hope will increase conversions and elevate NEAR’s presence significantly across various subreddits. 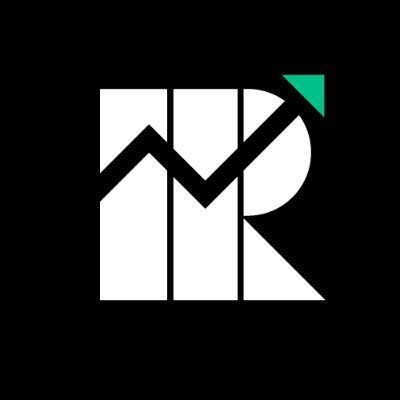 Before we initiated the Reddit Ops Project in the spring of 2021, there were less than 600 members to the r/neaprotocol subreddit and it wasn’t uncommon for several days to go by without a single post on the sub. Now, after months of spreading hot ecosystem updates, building stoke in $NEAR for token holders on Reddit, and developing several online personas to contribute to organic dialogue surrounding NEAR, the growth of community on the sub has been remarkable. Çek continues to curate 3-4 posts each day, while Georgia publishes the content on the sub at strategic times. Just looking back to July of 2021, oftentimes our 3 posts from a specific day made up approximately 75% of the entire posts on the subreddit that day. However, with 4.5k members on r/nearprotocol and greater recognition of NEAR’s name in the cryptocurrency/blockchain scene, our 3 daily posts now comprise only a small fraction of the content posted each day in the month of December by the community.

To outline what the subreddit looked like this month, Çek has broken down the types of posts that he has prioritized after finding success from his presence on Reddit. Although we have experienced less contribution from Swine Guild this past month, Çek has looked to outsource memes from various contributors. Through primarily Twitter and Telegram, some of the best NEAR-related memes have been shared on the sub. Because Çek speaks Spanish fluently too, he tries to intersperse posts in the Spanish language in order to appeal to the Hispanic audience. Here are examples of 2 memes that were shared throughout December. 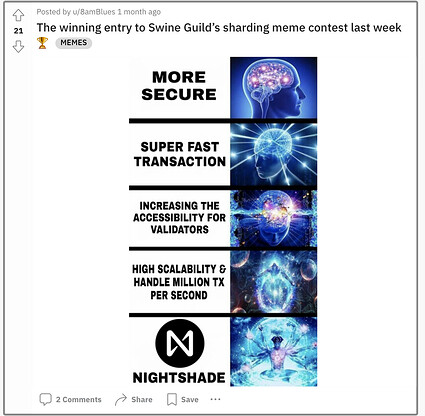 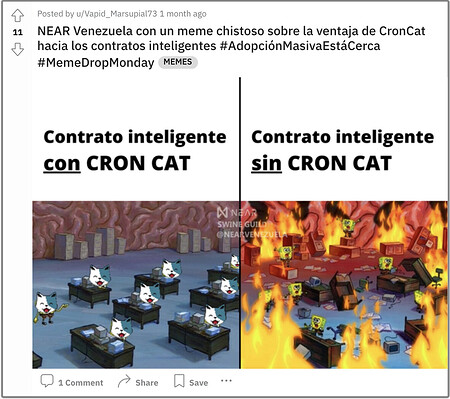 In conjunction with NEAR Marketing Distribution and the NEAR Degens, Çek has continued to share important information happening in the NEAR ecosystem. Depending on the daily or weekly intake of content, Çek redistributes relevant material for the Reddit users. Certain posts, such as the weekly NEARWEEK editions and the Women of NEAR features, have been emphasized on Telegram channels and placed in the sub’s posting schedule. Similarly, other blogs about NEAR and the ever-growing number of projects built on the blockchain are shared frequently. 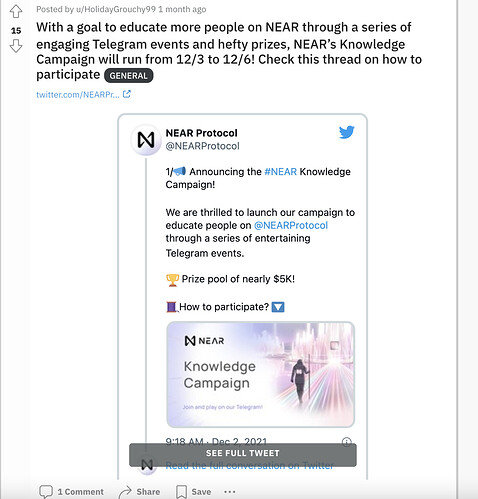 As in the past, one of the largest focuses is to instill more and more stoke into the value of NEAR as a product. With $NEAR token holders in mind, many posts are geared towards fanning the flames around the coin’s price changes and spreading the idea that while $NEAR’s price may fluctuate, the value of the coin will only increase over time along with the increasingly recognized scalability and success of the blockchain. An ATH was recorded in the month of December, and the amount of organic posts pertaining to this was significant. From our end, we centered a fair share of our content towards the inspiration of stoke in NEAR’s product. 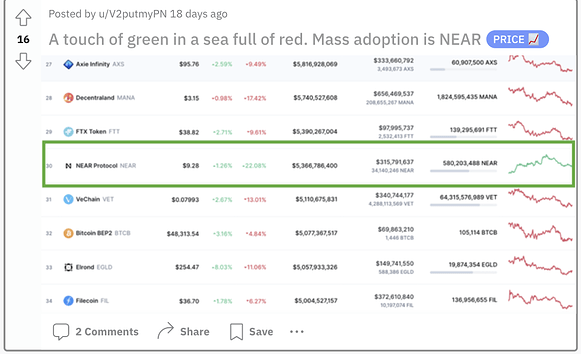 Above all else, we strive to consistently contribute and build the sense of community within NEAR on the r/nearprotocol sub. Whether this is done through posts tagged as “community questions” by an account that’s curious about the importance of a new partnership or the distribution of accolades accomplished by NEAR’s community, the importance of communal interactions and appreciation is highlighted on the subreddit. As an example, here are two posts that were successfully curated with the intention of developing pride and hype for NEAR protocol. 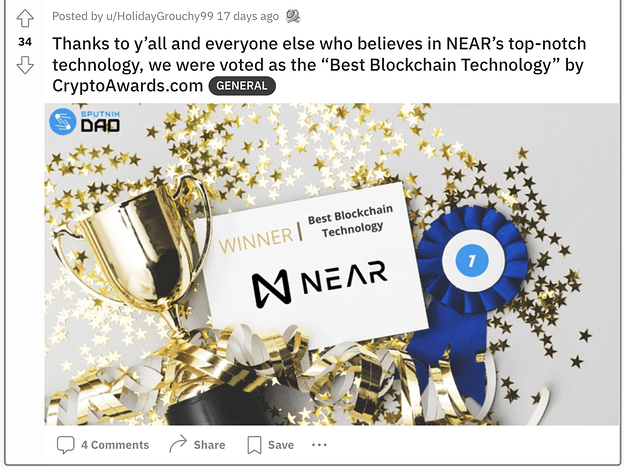 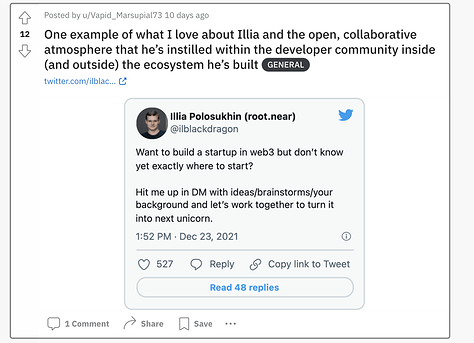 This month, we hosted an AMA with QSTN network. We received 13 upvotes and 41 comments. We did not host a second AMA because it would have been the week of Christmas, and we didn’t anticipate getting much engagement. To compensate for this, we will be hosting an NFT drop in January on top of the two AMAs.

We experimented with an excel document to record AMAs this month, which we quickly realized was a mistake because you can’t trust anyone on the internet. People started manipulating other redditors information, so I have been forced to reach out to individuals for their information. The payouts for the QSTN AMA should be completed today. Going forward, we will use google forms to collect information in a more, dare I say, immutable manner.

I also wanted to note that I have not yet sent in my DAO request for reimbursement of AMA payments. I will do that in January so that we can catch up on the past few months.

Subscriber growth is finally becoming linear from month to month. In December We added nearly 1000 subs, and anticipate even further growth over the coming months. When compared with the subscriber base since the beginning of our operation, we are finally experiencing exponential growth. This is the same growth pattern that all major subs have followed empirically and we believe this growth will only continue moving forward. In short - we are crushin’ it and will continue to do so. 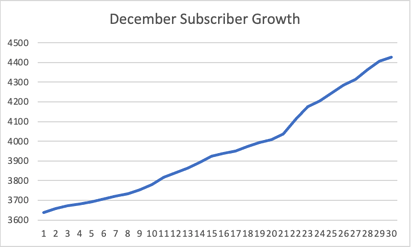 Great stuff, and awesome to see the subscribers rocketing!

I can see this has been addressed in the thread, but I do agree with the sentiment of this post:

r/nearprotocol - Why are there so many meme posts flooding this sub?

Could we do more to ensure quality over quantity?

Maybe we could make ‘Meme Monday’ where memes can be posted freely, the rest of the time they’re removed?

Good morning. Is it proposal for Marketing DAO? If so, I’ll prepare report today.

No, this goes to the Ecosystem DAO.M

WRONG. It goes to the MarketingDAO as it has been in the past.

This is a spectacular idea! We were planning on moderating memes more rigerously in response to this post, the Meme Monday idea is a great way to do this. Thanks David

Great to hear it

I’m still seeing a lot of memes on the front page, often from NEAR Meme Daily

cc @naveen_in can you be aware of this, please? Thanks!

Thanks @David_NEAR for the tag.

For me after a wonderful weekend, Monday is a tough day to start with and at that time finding memes will give a cherish moment to start the work again.

We will start posting again after following the guidelines given by Reddit Ops team.

Woo ! There is a NEAR VENEZUELA meme there @yehosua.near you are all over the place

10k still overpriced for me. 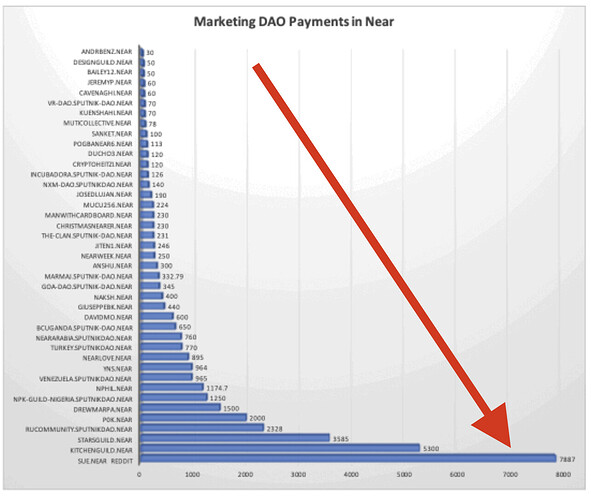 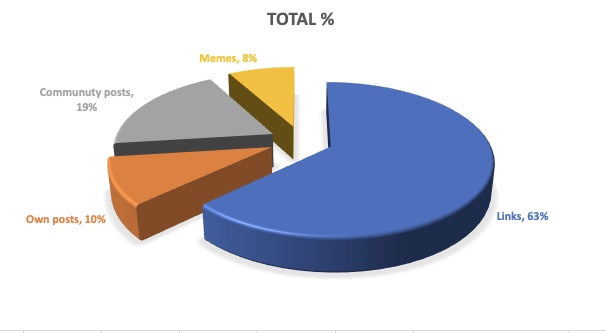 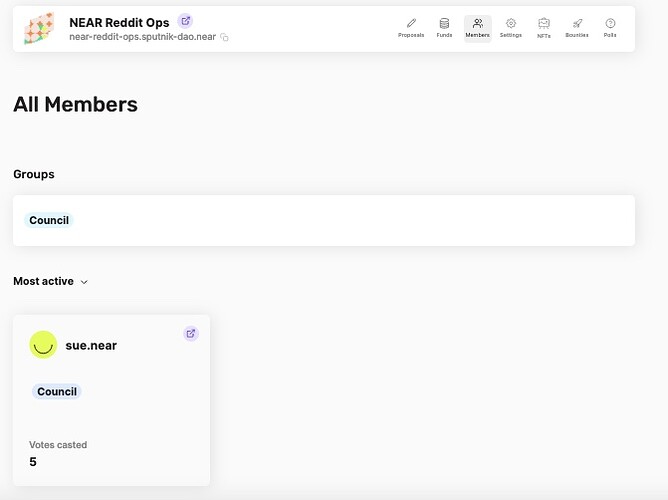