Vital Point AI (NEAR Guild) is building Catalyst - a DAOaaS with social/community features on NEAR. Targeting non-technical users interested in exploring how a DAO (without knowing what a DAO is) can help them build and nurture a loyal community around a common cause. Already Included or on the roadmap:

Our goal is to provide a platform with open web/web 3.0 functionality that feels like the Web 2.0 applications people are used to using. NEAR makes that possible.

Why Support this Project?

Encourage you to watch the development update video (be nice, it’s rough

) and consider the example use cases. 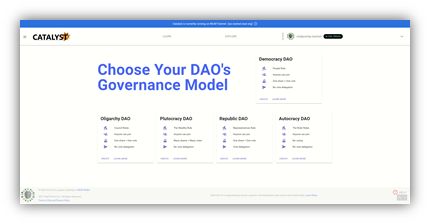 Sample of what we’ve done/been involved with:

2500 NEAR
75% targeted for development (~1800 tokens), 25% for project management (PM). (700 tokens). Not possible for PM to dip into development funds. If additional PM funding is required, will require an addendum proposal. 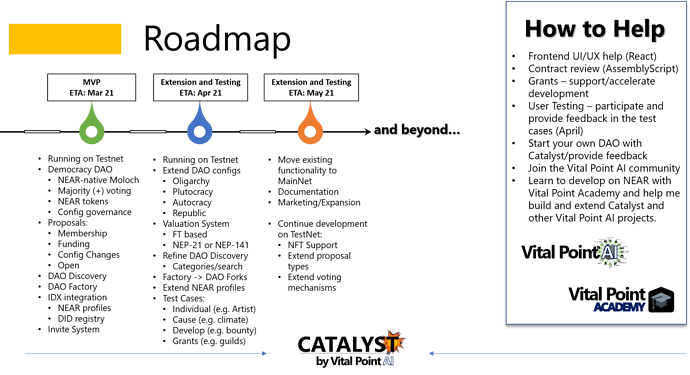 Thanks for considering Catalyst and putting your trust in Vital Point AI to deliver.

a DAOaaS with social/community features on NEAR is nice！

Extremely useful features- that too with social tokens and NFTs

I think this strongly aligns with NEAR’s positioning around usability.

Our goal is to provide a platform with open web/web 3.0 functionality that feels like the Web 2.0 applications people are used to using.

Love it. Will be in touch this week as we prepare Sandbox for Launch

@shreyas should we move this to #community:community-fund and add a vote? trying to batch together a few proposals for a vote by EoW. This proposal is very much aligned with our current priorities.

@shreyas, @nima, @waverlymaven - just wondering if there’s a mechanism/possibility of bringing this back to the community-funds attention for consideration and voting. Seems like these proposals get some initial views/attention, then disappear into the depths of the forum and few ever get finalized one way or the other. Feels like being stuck in limbo

Absolutely. We’ve just onboarded @Grace to the community council as a voting member and are planning to work through all the pending proposals through this week and next. All of these are definitely on our radar and haven’t slipped through

Hi @ALuhning I am very enthusiastic about this proposal. Let’s make this happen, cant wait to try the MVP. I would be happy to follow your progress and support any efforts that may drive your success. I would also like to schedule an intro meeting this week or next, when possible.