Updates on several tracks of work happening for DAOs on NEAR! Ecosystem overview for orientation: 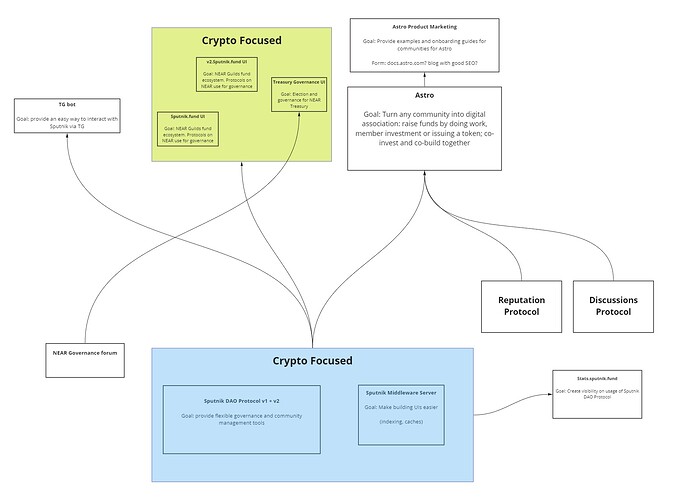 Major milestones and pieces that don’t fit in to any other bug tracker live on taiga (was the quickest open source scrum board I could find to set up, options welcome):

Web2 focused interface for the Sputnik v2 contract. Being developed by MagicPowered based on UX by IDEO. Expected to ship Sept 20th. Based on Astro PRD.

Fresh face for Sputnik v1 contract, live at sputnik.fund. Being iterated on with weekly deployments.

Slim server sitting between the sputnik contracts and interfaces like sputnik.fund, bots, etc. API can be browsed at this swagger. Based on Sputnik Backend-for-Frontend Technical Design Document.

Growth hacking around Sputnik and Astro.

I think big missing part is the documentation for v2.

How about starting a gitbook on docs.sputnik.fund and start collecting info there?

There are a number of things that people are asking (stuff like how to add multiple roles/people) that are not straightforward and not going to be any time soon given flexibility of V2.

Also that would be good place to capture more of this information about all the components in the Sputnik Ecosystem.

I agree on a gitbook for docs.sputnik.fund.

I can move what’s been collected in https://app.gitbook.com/@near-community/s/communitywiki/tools/sputnikdao to it’s own Space.

Ideally under the main NEAR Org on gitbook so that cross-search works across as much ecosystem documentation as possible. Blocked on access to that if you or any admins can add Github user starpause.