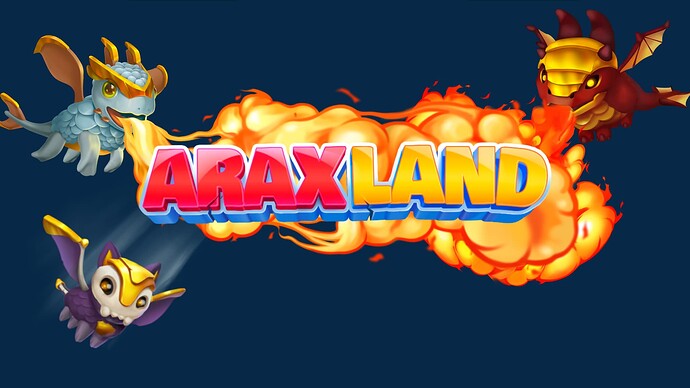 Players in AR mode can catch, raise, procreate and trade creatures (araxes), as well as assemble teams and fight with other players in arenas and tournaments, receiving system tokens as a prize.

The creatures have various characteristics and roles, allowing a player to create different team compositions.

We use the NEAR protocol/Aurora EVM to speed up development and in the future we plan to follow an open source approach and perform functions for the development of the NEAR community.

GOAL
To create an accessible mobile game for players of all levels. To build an income model based on the trade volume of NFT items among the players. To engage the audience through AR by catching creatures in the real world. To lower the game entry threshold and allow players to start playing without initial payments. To develop a game with high level graphics, a well-developed battle system, quests, and tournaments.

GAMEPLAY
This is a game of creature teams fighting in the arena for prize money.

Moving through the city in the real world, a player catches, or buys in the market, an arax that he/she can breed with other creatures. The new generations of creatures come out stronger than those before them.

Arax possesses a set of skills the quantity of which depends on its generation. Creatures of different breeds have unique appearance and additional skill, giving them advantage in the game.

Depending on its genetic code, an arax receives additional skills and a unique name.

The combination of breeds and skills is significant for victory in a fight. Arena battles are played in team vs. team mode, with a random opponent of an appropriate rating. Elo rating system is used as a measure.

A player does the breeding of araxes, which he/she can sell for crossbreeding or fighting. A player can also put up an arax for breeding and receive rewards from other players for it.

The older the arax, the more powerful are its characteristics and looks. If a player owns a few araxes, he/she can feed one arax to another to level up the latter arax’s strength and skills.

Players in map mode choose a captured creature and transfer to AR mode. Captured creatures can be used for Battles and Breeding, as well as be sold on the marketplace to other players. Captured street araxes are called “wild” and have pure genetic potential for crossbreeding.

To breed a new creature, a player needs to choose two desired creatures from his/her collection to participate in the crossbreeding. After making the choice, a player pays for the breeding using soft and hard currency. This results in an egg with a timer for when the creature is to appear.

The selection of creatures for Breeding is carried out according to the genes necessary for gene transfer to the new creature. Genes encode the appearance of each body part and the class as a whole.

Crossbred araxes differ from the wild (captured) because of the presence of parental genes. Arex with complete genotype is an NFT.

Fusion.
A player can fuse two araxes. This pair will have a dominant creature that is being strengthened and a donor, part of whose characteristics will be transferred to the dominant arax. After the fusion, the dominant creature will level up in basic skills and will inherit the skills of the donor.

Battles.
A player can assemble a fighting team of three araxes from among owned creatures for PvE and PvP modes. A player either considers the strengths and weaknesses of the creatures, creating strong bonds, or sharpens skills by passing a certain level in PvE. By participating in PvE campaigns or winning against other players in PvP, a player earns soft tokens.

PLAYERS
Beginner: a newly arrived player is invited to participate in catching creatures through AR mechanics or to buy creatures on the market, thus moving into the category of farmers. Without investment or with minimal investment threshold.

Farmer: this type of players are engaged in purposeful catching of creatures through AR or in completing quests for currency to use for breeding with subsequent sale. Ready to spend time, but not ready to pay.

Breeder: a player catches and buys creatures at the market in order to create interesting breeds or powerful creatures for further resale. Medium threshold for investments of either finances or time.

Collector: a player is focused on assembling a collection of beautiful creatures, paying attention to interesting abilities and appearances. Main activity is browsing the auction in search of interesting creatures. Cherishes his/her collection, ready to sell or buy. High financial investment threshold.

Arbitrator: players who browse the auction in search of good deals only to relist their items at a higher price. Might possibly use outside marketing strategies to promote their stock.

PvPer: this type of player is focused on global growth and wants to be in the top. Looks for the most powerful creatures and is ready to pay large sums. Participates in arena battles, receiving hard currency and spending it on bets. High threshold for investments of finances and time.

Hard Token is created only once during the first token printing and cannot be added.

Soft Token is created in response to players’ activity and has no finite amount.

In addition to these tokens, we create ERC-721 tokens in the system (non-fungible creature tokens) that store data on creatures, as well as on their items.

All tokens may be sold, exchanged or donated among the players for it is their property.

NFT tokens are creatures and items that are not yet bound to creatures.

Just to be sure, is this being built on NEAR?

Yes, we are planning to do a project on the NEAR protocol, which is why we came to your ecosystem.

We are sure that NEAR is the technology that will allow us to implement everything we want in this game.