The story of this educational journey begins last year when all the students of the Technological Institute of Tlaxiaco were in online classes, and the fourth wave of covid was in full swing in the Mixteca region in the state of Oaxaca, in addition to the process teaching was very difficult to face due to the poor quality of the Internet service that stopped working for more than 12 hours. 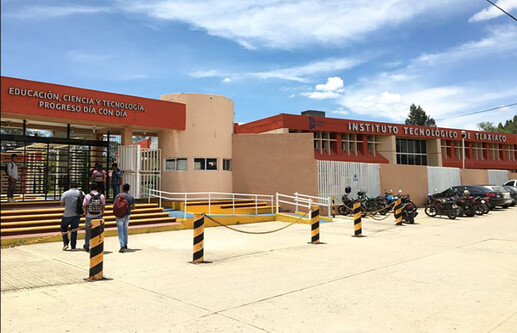 A large part of the student population of the Tecnológico de Tlaxiaco, mostly indigenous, and especially the Computer Systems Engineering career, faced education with the challenge of being productive and agile thanks to the eduscrum framework and the GitHub Education platform recognized the task of learning new technologies with Tec students.

Professor José Alfredo Román Cruz of the Tec de Tlaxiaco in 2021, indicated that he was invited to train in the new Web 3.0 technology with Near University to learn how the blockchain works, knowing the tools, processes and methodologies to be able to teach future generations of students smart contracts.

“I realized that we need to learn a new technology of the Near protocol, that the Tec students have an opportunity to develop their own decentralized applications to be able to learn in the Near ecosystem”

In the month of April 2022, the residence with Near University began with the project called development of smart contracts with the Near protocol by students of the Tec de Tlaxiaco, 27 students of the Software Engineering subject who had received training by the brotherhood of Near Hispano to receive knowledge that is Web 3.0.

Alfredo Román pointed out that the challenge to implement smart contracts is twofold, because the classes at the beginning of the project changed to hybrid, plus poor Internet connectivity, he decided to motivate new talents to learn best software engineering practices as well as Web 3.0 with new languages ​​to manage information in the blockchain.

The challenge of being agile, productive and starting to learn new architecture began in sprint 1, so that students could get a more global vision of how data is stored in the blockchain with programming languages ​​such as Web Assembly and Rust, as well as working collaboratively and follow up on the project with instructors such as Cristian Zambrano and Cristina Lostanau from the Near ecosystem.

Tec de Tlaxiaco students found a new way to learn and collaborate, in the Near Hispano community they found information for the development of contracts, as well as many talented people such as enthusiasts, programmers, instructors and teachers who want to add value to the Near community commented Professor Román Cruz.

To achieve software quality in the development of smart contracts, sprint 2 was executed to train students to be able to implement a test plan for decentralized applications made for the Near protocol. Professor Roman Cruz pointed out “the quality of the code depends on whether the test cases are carried out with the requirements of the document made in the previous semester, a document that specifies the functional requirements.” Tec de Tlaxiaco students implemented unit tests with WebAssembly to ensure that there are no bugs and software defects.

Roman Cruz commented “The era of Web 3.0 with Near was advanced not only in the implementation of new technologies, it was also advanced in the classroom to be able to train future talents, the young people of the Tec de Tlaxiaco from the indigenous communities deserve an opportunity to their personal and professional development, to undertake their own blockchain projects”.

Amazing job! I loved being able to help the project go ahead