Hi NEAReans
Greetings to the Near Community

Thanks to the third working week we have now another +100 members on our telegram group thanks also to Near Venezuela in Valencia (one the largest cities in Venezuela). Take a look below: 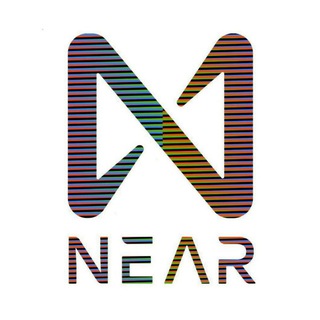 Here the last report from myself as a reply:

Hello fellow members of the NEAR Community I’m Luis Aponte, member and council of the Near Venezuela guild, and part of the research team in Sankore 2.0. Since this project was approved. I have been in charge of the logistic and management of this project regarding my expertise and experience, and I am doing this for Free by now. As I worked with some embassies and consulates within the programs and projects of development and support of this kind of activities, I also give my knowledge in thi…

The fourth week report corresponds to the past weeks from 22th Nov to 5th Dec (we have a little delay on our because we have some restrictions due to the COVID-19 cases increase).

As a new council of the guild, I’m delegating tasks to other members of my team, because we believe in our community that is necessary that everyone gets involved in NEAR so we believe in the Work Team. So, I’m deep compromised and working on this with all my heart, energy, and time.

We have 2 main projects that we are working on since the funds were received, and I was aware that we are just starting and these projects are convenient for the Guild to grow and to understand how NEAR supports different projects along with the world. That’s why @Nicolasp2 @FritzWorm @Jloc @Arturoahs and myself will not have any extra compensation/payroll from the work this first month on the #near-venezuela Guild.

That’s being said, we will proceed to report the work and activities of our 2 main projects:

The Palmeros de Chacao association and tradition now are getting used to ASTRODAO, so that is amazing that we have a Cultural Human Heritage certified by UNESCO using NEAR Protocol on daily basis. NEAR is near of UNESCO

I visited as a part of our reviewing and checking process of the activities, the Vivarium “Los Palmeritos” where I supervised the rehabilitation of the accommodation and start to look fantastic because they did:

Below you will see the evidence and the photos took it by the team. 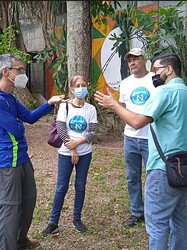 In this opportunity, we count on the participation of:

Alejandro N: Head of General Services of the Chacao City Hall (that is the location where the tradition started)
Maria Victoria: Coordinator of the Palmeros de Chacao
Richard Delgado: Manager of the HQ of the Palmeros in Caracas
Julian Mostasero: Professor of the USB and Scientific Advisor of the Project of Preservation of the Blessed Palm. He is a Biologist Botanic specializing in Ferns

Also, we visited the Headquarters of the Palmeros near the Civil Protection Body of the Chacao City Hall and Miranda State. At this, we took a meeting with the people that are interested in the Palmeros and we take the advantage to welcome them to NEAR

At this stage, we include a new member of the project as they will focus on Social Media and also as the Direct Manager of the Palmeros and his relation with NEAR. He is also an internationalist like me. 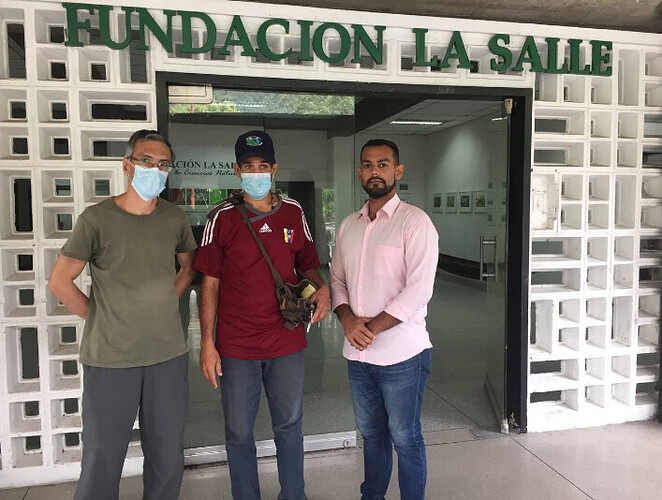 image708×534 111 KB
Above you will see: At the left professor Julian, in the center Richard, and then the new member, Jonathan Franco.

Welcome aboard Jonathan to this excellent initiative.

What should be improved?

1- Social Media
2- Marketing Strategy towards the project with others entities.
3- Find a solution asap regarding the implementation of the tasks related that was postponed due to COVID-19 restrictions.

1- First touch with the public authorities
2- IT issues within the team.
3- The Test of Recultivation of the Blessed Palms in other zones and geographies of Caracas (Venezuela) and Miranda (Venezuela)
4- Solid Team and more Volunteers.
5- Getting used to new tools that NEAR provides: AstroDAO

It was the most fun project as people spoke. Obviously, people love beer. Wouldn’t they love CRYPTOBEER?

As we discussed with the craft brewery houses, we agreed that for the diffusion of new events, the integration of CRYPTOBEER, and the organization of the activities, we created the IG account to facilitate users the news about the Cryptobeer events supported by Near Venezuela Guild since 11th November.

We organized the following events:

@caferacerbar_ve: For tomorrow, we will have a magnificent event in this prestigious bar in the Miranda Hills where it’s characterized by motorcycle and rock theme. Approx, we will count with 500 pp as assist on this event where we will invite them to join NEAR asap. We agreed that with the bar and the Executive Body in a press conference held in 7th December. They have a wallet —> caferacerbar.near 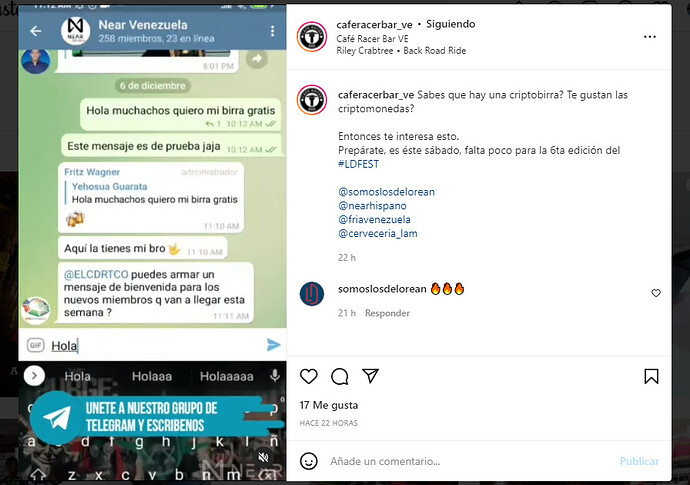 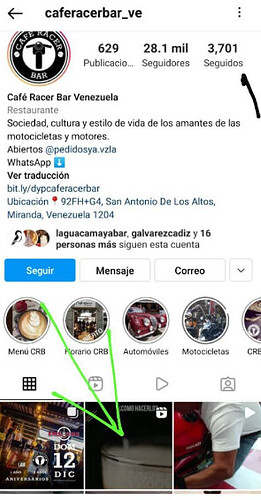 @rosariocortesmerida: It is a bar in the city of Merida (VE) where we run a cryptobeer event. We opened their NEAR account —> rosariocortes.near
The craft beer is called “Andenes” and a band known as “Los Agentes” performed a little gig.

Other events that were made it couple of weeks ago, we will inform it in the monthly report on the following days and will translate them asap: 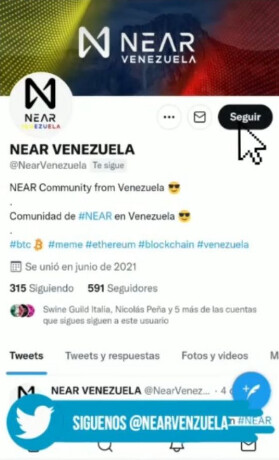 It was the most fun project as people spoke. Obviously, people love beer. Wouldn’t they love CRYPTOBEER?

Good morning!
I don’t understand how can we use in one statement UNESCO organization who fight against alcohol consumption and alcoholic beverages.

10-19% 13-15 years old Venezuelans have been ever been drunk. One of worst situations in the world. 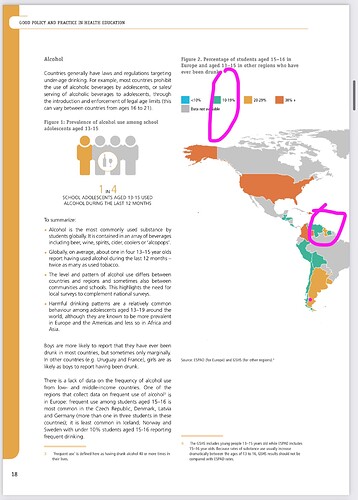 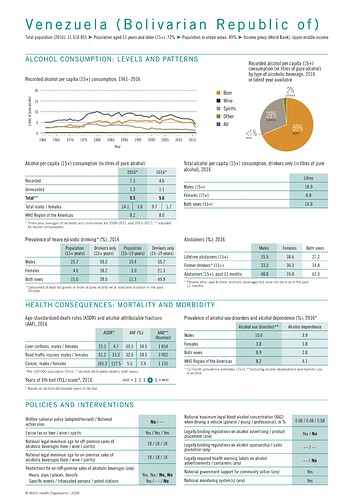 Thanks for caring @Dacha !

This are to separated projects under our supervision

One goal is to help “Palmeros de Chacao”, they are deeply touched by the sponsoring and help we are (NEAR community) giving them. The project is for them to be self-sustaining as organization, and this will take around $20.000, that we plan to spend step by step.

The impact will be huge, this will be a top example of how DAOs help organizations to be succesful ! By showing NEAR a green and positive climate project at the same time

The other project is to bring awareness about NEAR to people, and let them experience the smooth onboarding into crypto with the NEAR wallet sharing a drink

Please, don’t worry about the alcohol comsumption, we have bigger issues here, and NEAR is also an opportunity for people to learn about the new techs and start adding value at the same time the growth professionaly.

However, I’d like to explain to you both things:

NEAR VENEZUELA Guild have two projects at this moment that NEAR and his community, tools, and protocol were included into the following:

Both projects were approved for his launch and run out a couple of weeks ago.

Is a tradition that was recognized by UNESCO in 2019 as a Cultural Heritage of Humanity. It doesn’t have any relationship with alcohol or any other consumption. We onboard this project with the support of NEAR to express to the world through UNESCO (that is a UN organization) that NEAR works with social and cultural projects in order to contribute to climate’s solution and to the weather global crisis.

What is the tradition? Basically, prayers to the Blessed Palm that previously in the colonial time a plague whipped almost entirely Caracas and after the prayer and blessing of the palm with which they rubbed the sick, the miracle began to occur. The people started to heal. Also, the people that protect that palm, located in Avila Mountain in Caracas, are people that care - and believe me - a lot about the environment and weather. Those people don’t even drink or smoke a piece of anything.

So, I guess your confusion was solved

In another way, one of our members has expertise in craft-brewery because it was a hobby for him and it knows deeply how the community of brewers works and engage and what are their needs and goals. So, they organized - and this is the most important thing because it means they are building communities (nothing quite easy those days) - people and craft brewer houses into one space to share and enjoy some quality time to chill out with like-minded people. And the most important thing: They are organizing those people through NEAR. Near, the functions of their wallet and every good thing that NEAR supports and gives tool, are the BRIDGE between communities to relax, enjoy it responsibly, and to invite with onboarding them to NEAR and his community.

So, it doesn’t seem to me that people in that moment gathering and talking about NEAR while enjoying craft beer paying in crypto, and listening to music, looks irresponsible.

However, maybe you are a little bit confused but I personally invite you to follow the social media that Crypto Beer is managing, and if you want we can set a call to explain to you further what is all about.

If there is any other doubt that may arise, don’t hesitate to contact me or any of my other guild members.

Good evening! Showing to whom? Is it official collaboration between Near and UNESCO ?

We have Open Forest Protocol for this.

Thanks and stay sober

We have Open Forest Protocol for this.

Julian Mostasero : Professor of the USB and Scientific Advisor of the Project of Preservation of the Blessed Palm. He is a Biologist Botanic specializing in Ferns

This is me, just now you see these reports, from the first to the last. I am ready to work!