Proposal for a better USN model

OBJECTIVE:
To improve USN to be the best of the best algorithmic stable coin in the market.
100% sure of the peg to 1$ in all cases, even Near drops to 0$.
Much more incentive for Near holders to provide their Near to the reserve fund for getting rewards.
The development spiral will replace the death spiral. Better for everyone: Near ecosystem; USN holders; Near holders & fund providers.

For details of proposal, I made the proposal in the slides as below.

This Slide is private

The NEAR Foundation is not responsible for USN.

USN is an independent project, led by a team named Decentral Bank, which is organized as a DAO. It is collaborating with Proximity Labs, which is a DAO contributor.

You can join their Discord here

If they’re around on the forum, feel free to discuss it with them here, too.

But anyway if it’s a native stable coin on Near.

It’s not integrated into the protocol layer like UST. It’s an independent project built on NEAR, the core NEAR team at NF isn’t involved in it.

I think we all need to do our best to communicate this fact to the broader ecosystem. Many outlets and publications have been incorrectly stating that USN is NEAR’s version of UST and proceeding to create FUD around NEAR due to this misconception. 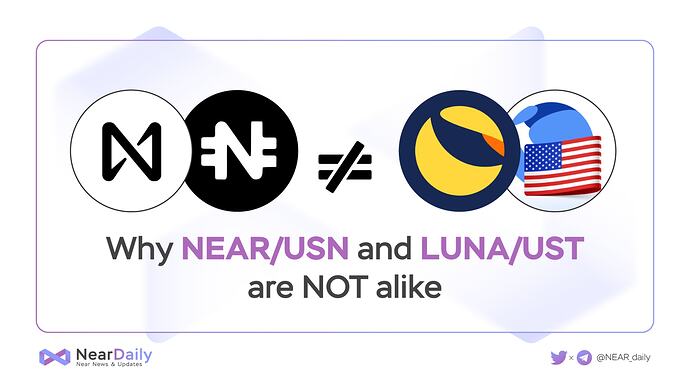 Here’s a good example of the many FUD articles I’m seeing everywhere now.

of cause there are main differences between USN and UST. But to make it become the best of the best with the development spiral in both bear and bull market, i think we just need to modify a little bit more.
My proposal is based on a formal verified paper about stable coin in IACR. It will make Near become strongest ecosystem with the best stable coin model.

As Mark said correctly, this is the wrong forum as USN is not NEAR, but since you have quoted a “FUD article” just my small comment on that part.

In the quoted article the writer himself writes:
Bottom line:
Unless USDT depegs and Near crashes simultaneously, USN is safe.

IMO that’s a fair statement and not really negative unless you just read the headline and read into it something else.

Further he gives his personal opinion about USDT, which again, IMO is fairly correct from his point of view. You may have different opinion and that would be ok, too.

I don’t totally agree with the proposal of the OP but I think is good start discussing (potential) improvements of a product.

more than happy to get your feedback. I am willing to hear more from you about the proposal in private messages.