The Beginning of Problems

Help me track the issuance and redemption of USN, specifically as it relates to transition between v1 and v2. THIS is where the real fraud may be…

The v1 Whitepaper (download while you can), which has now been taken down from website, is not available on Github and I was only able to retrieve doing some digging, has a very interesting feature. 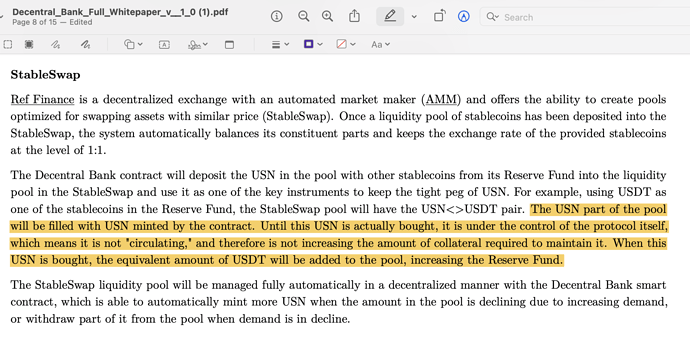 Was the USN minted under v1 properly burned when transitioning to v2?

Otherwise, it seems like an anon team printed tens of millions of dollars worth of USN while relentlessly lying about it being fully backed. Then the NEAR FOUNDATION inexplicably hands over $40m to an even shadier off-chain Protection Program where - it seems, the USN that was minted out of thin air can now be redeemed by those who control it, siphoning out $40m out of the Foundation and into the hands of a corrupt core.

Note to the Censors - Hairen is a pseudonym. I have been around since the beginning. I have eyes and ears in many places. I only post things that I deem vital for the ecosystem to survive. Nuke this post or account and it will pop up elsewhere. You can’t hide the truth.

You have raised solid questions and I fear that you won’t be getting any answers to those. From what I have heard, the USN project was orchestrated by NEAR UA and they were involved in it to a certain extent. NEAR UA itself was an exceptionally shady initiative and they refuse to disclose numbers and provide reports on their accomplishments. The involved parties in NEAR UA include, but are not limited to:
Anton Vaisburd - Managing partner at NEAR UA, CEO and co-founder of Datrics (project mentioned within the report and backed by NEAR NEAR JOINS DATRICS AS A STRATEGIC PARTNER , general partner at SID Ventures)
Kirill Kirikov - part of the NEAR UA team, CTO of Datrics, involved in Wombi, and general partner at SID Ventures
Veronica Korzh - partner at SID Ventures and co-founder and CEO of Geekpay
Igor Kaufman - VP of Product at Datrics and founder at Wombi

All of them have connections to each other - they are all acquaintances, friends and so on. The amount of funding they received (Foundation does not desire to disclose it) has been partitioned between these involved individuals and there was always an extensive degree of opacity due to their relationship with Illia. To certain degree it seemed that they always felt privileged and possessed a carte blanche.

The epilogue of the story is that if transparency is not respected and information is concealed, then the funds were simply misappropriated.

Thank you for raising these questions. Despite the fact for me your wording is a bit harsh (based on the presumption of innocence), I would like to get answers too.

I didn’t catch that move with spending 40m$ to shut down USN as well. I immediately exchanged my USN on Ref Finance after the news but I see the USN farms are still alive. And no more news about USN program.

I hope the NEAR Foundation will do everything so that the regional mafias lose all access to management, distribution and other vital things!

Thanks for taking the time to expose this!
It is quite disappointing that this post did not receive that much attention.

Hey @hairen,
Really curious to hear how things are progressing with your research.

Has anyone from Near addressed this?

Do you have any updates?