[FLAG] Report of Inappropriate behavior from a NEAR community MOD

Oh you feel that way! Let me remind you I wasn’t the one making personal accusations first! You pushed me to the point where I had to remind you what dacha told you 2 months back and you felt it like a defamation even though it was on a private chat!

I don’t care what people accuse me for but when my co workers start accusing me,I’ll definitely won’t be able to control my emotions. After working more than 10 hours daily for 4-5 months for NEAR without taking a break, receiving such accusations from co-workers who started few weeks back isn’t most pleasant thing for me

Let me remind you I wasn’t the one making personal accusations first!

This is a lie from you.

Let me explain it:

You are talking about the following, it was an statement, that were facts, and it was my reply after you already were difamatory agains me, after it was so hard for you to be convinced that Gaston is a legit user.

and then you received my statement, that are just facts, not guessing or difamatory coments. 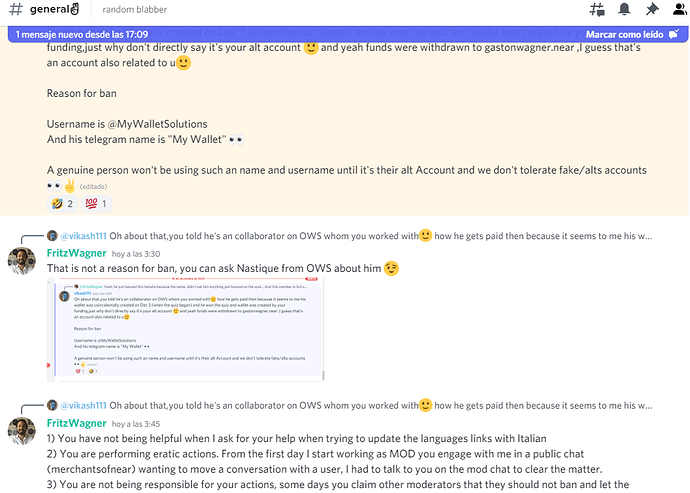 Gaston is a legit user.

Your claim for argument is baseless. I never argued Gaston isn’t a legit user but I had an claim that’s it’s not an genuine Telegram account and it was proved to be Gaston’s Telegram Business account.
Thanks!

You should not being so hard to talk with or convince…

You are being so stubborn that you have managed to extend this here with so many replies, it is not a pleasure for me to have to discuss this here publicly to avoid that others have to suffer defamations against them from you

I’m still waiting for an answer how private conversation are defamatory for you!?

Your bad actions need to be exposed, so other members don’t have to be banned or what even worst, beeing treated with your passive aggresive attitude.

Hey guys ! @Kv9990 & @FritzWorm . I would request this to stop, i see this going beyond the line , where i see everything turning into personall attacks , for the betterment of the forum , i would say . Kindly refer to Implementing NEAR Community Guidelines
For more information.

Hey guys, @Kv9990 & @FritzWorm .
I request you to stop this, it’s going beyond line for forum discussions.
I won’t say anyone of u is wrong or smth, there could’ve been misunderstandings from both sides.
I know you both are mature enough to handle it via personal chat.

We’re here to BUIDL together not to fight

agreed! it’s clearly stated there below

Hey everyone, Goal To clearly define the rules of the forum in order to mitigate spam, encourage a positive environment, and share basic guidelines on how to interact with others in the NEAR Community. Below is a proposal for general community guidelines which will pertain to everyone participating in the NEAR Governance Forum. This will be sent as a welcome message to every new user who signs up. As is always the case in an open-source ecosystem like NEAR, I’d love to hear your input on how…

When on the Forum, you should:

Well that name surely raises eyebrows.
I remember when i was new one of them managed to steal funds (old noob times)
These names in general are associated with scammers.
In recent days these wallet attacks are coming from several places like telegram twitter & most recently from playstore(200+ near already stolen).
Just voicing in my viewpoint as i have suffered same in the past.

yeah ! From the community guidelines →

Failing to adhere to these rules may result in a permanent ban from the NEAR Governance Forum without warning.

The result of defamatory remarks is permanent ban (edit: May be)

@gokubaba this is not about Gaston Banning, this is about Vikash calling ME a scammer saying:

Yeah you can invite your fake/alts accounts to your guild and claim funds for your guild where you added 3 members in a month,I don’t care about what individual guilds do

If you are not going to follow the rules and protect the values of the community by banning him out of the community, at least you can understand he cant be a Moderator.

You guys should have sorted it out

He said those things to you via dm
Maybe on telegram

It was on the Community Moderators channel so it was not private other mods see it and may thought it was true because they didnt engage, and I am certain this is a serious matter.

This person should not be a moderator, I want this to be solved fast enough so other people will not suffer, you are seeing a flag here that proves he has this difficult personallity that is not suitable for the Moderator position.

Again, I apologize for the other mods’ behalf if you felt defamed and disrespected by their responses and even emoji reactions.

It looks like Vikash has accepted his faults in the situation and understood the gaps in our current protocol. We’ll move forward by keeping these discussions in our private group with our team members.

I went into detail in our channel about my response, but sharing our public next steps so this gets avoided:

If your brother wants to reach out to me, the Senior moderators, or other members of the community squad, we’re happy to accommodate for him.

Thanks @jcatnear for your feedback, yeah my Brother is fine, this is not about him, this is about Vikash implying that I am stealing money from the community, I take it as a very serious claim because it came from a MOD, and is unprofessional.

As you had check on this, I take it as solved and accept your apologies. Thank you.

Hey guys!
I’ve followed up this issue and would rather say that it doesn’t really call for all this.
I have known @FritzWorm to be a straight forward, calm and nice guy, I also know @Kv9990 to be very respectful and understanding as I have never seen him acted rudely to anyone. To this end I want to plead to @FritzWorm that you please forgive your colleague and let it go. I believe he now knows where to draw the line.
One love guys

It’s a shame this had to boil over to the forum, however I can totally understand why it did.

We should be conscious that:

B) We, as NEAR Moderators, are on the same team. We should always support and encourage one another to achieve better and reach higher.

In light of this, I propose we set up the following:

The forum is an open and public space and, generally, it should always aim to foster positivity.

Just like in any other organisation, I think it’s essential we set up a HR-esque process for situations like this (disagreements / potential inappropriate conduct between moderators). This process will only increase in value as we continue to grow (which we will

If you have a grievance (or, indeed, any issue), please raise this with any of the Moderator Leads (or you can approach myself if you wish!)

We’ll assess the information, and mediate between the parties in an internal manner to avoid this having to spill over to public domain where appropriate.

–
Would love to hear any feedback on this.

Locking this as I think we’ve all learned what we can and the issue is resolved.