The current dashboard at explorer.near.org/stats is a great start but we need to create the next level of analytics so people around the ecosystem can quickly get a sense of which projects are contributing most and how close we are to key milestones.

To start, I mocked up a momentum dashboard which focuses on the metric of how many total and new accounts a particular set of apps is bringing into the ecosystem. This is because the best early indicator of momentum is how many new accounts are attributable to the efforts of a particular app. We consider “breakout” status to be 100k new accounts and the goal for the end of Q3 is to get total accounts to 1M plus have a couple of individual breakout apps. 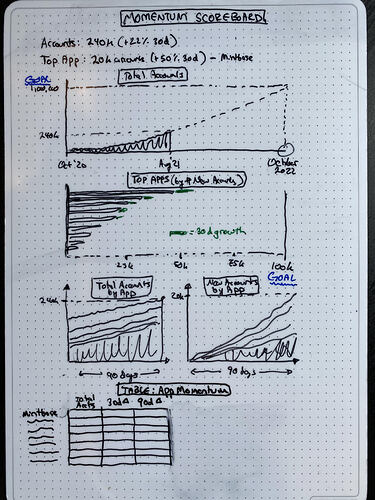 In this case, the key charts highlight progress towards each goal. A quick explanation:

Total Accounts is pretty straightforward and includes all accounts from NEAR’s launch but is indexed back from the goal of 1M (y axis) and out towards whichever date it appears, based on the current trendline, this number will be hit. The trendline should be highlighted.

Top Apps is a grouping of the top 10 apps showing how far they are in their progress towards 100k accounts since inception. Thus x-axis is up to 100k. There is a separate colored portion of the bar for the last 30 days of growth, to make it easy to see which ones are growing fastest.

Total Accounts by App is a 90 day stacked area view that shows total accounts and attributes which of them are for each of the top 10 apps (the same top 10 as before) and a base bar representing “the rest”.

*New Accounts by App is similar but only shows new accounts in the next 90 days so we get a sense of the growth rates. It will of course start at 0 and provide some more visual granularity, despite having similar data.

Table: App Momentum is a data set showing the same data for easy consumption – for each top 10 app, how many accounts do they have and what were the changes over the last 30 and 90 days. Ideally sortable in the browser.

An account is considered to be “brought in” by an app when that user interacts with that app first. Obviously attribution is an art and a science which gets complex as apps begin integrating each other more but this is sufficient for now.

Presentation
This data dashboard isn’t meant to be hidden, of course. We’ll be showing it off at least every 2 weeks during internal NF all hands and externally at town halls so everyone can see the momentum that’s growing.

BEYOND
Analytics goes deep. Even though right now we’re paying attention to new accounts created by apps to get a sense of their momentum, we should be able to replicate almost exactly this set of tables for TVL of financial apps and, eventually, active accounts, associated guild members, etc.

@frol have a look at this amazing idea

Cool idea, and there is definitely a lot of data to explore! As you said, NEAR Explorer only paves the road, but it will be a whole new project and Explorer team is under water now with providing the pick into the data that is more granular while analytics is about aggregating the data. The good part is that the data that sits there for Explorer needs is perfect for the aggregation, so if there is someone willing to pick it up, I am happy to help along the way.

@yifang How do you feel about picking it up? I know you were mostly focused on the internal data collection, but this could be a cool project for the whole NEAR ecosystem!

Highlighting some additional analytics work from the ecosystem, feel free to add more:

Stats gallery where you can see the activity on a given account, produced via the education effort: https://stats.gallery/

I am not sure if it is a good fit for me or data team to pick this up since Erik wants these things in one place and he picks up Explorer, but our data team is actually not going to work with Explorer and want to set up our website and project to go.

We currently re-evaluate Explorer and consider solving various user needs in different frontends. Analytics platform can easily be a completely separate service while still backed by Indexer for Explorer database.

@frol I understand.
I will take over this as our near data center task and move the explorer stats also there to gather them together. Then we will ask someone to redesign all these stuff in one place.

Curious - did this ever come to fruition?