I’m a winner of “Stake Wars III” and currently I’m a chunk only producer for a month.
There are some questions about validators economy and getting profit for validation in mainnet or at least breakeven point.

As I remember one of the Stake Wars targets is increase decentralization but we see that top 10 validator pool keep about 38% total stake. 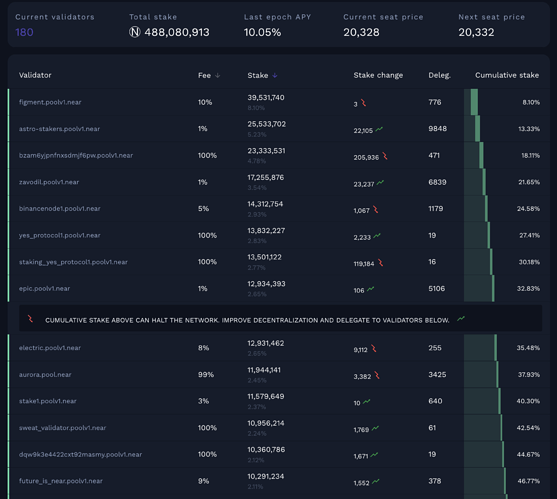 But also we see that lots of delegators of top-10 validators are smart contracts *****.lockup.near

I suppose that NF knows majority of owners of this contracts and NF has opportunity to influence on owners to distribute delegations to different validators. It could support network decentralization and small validators.

I think this could be great. Why?

This could be a good first step, but It will always depend on the good will of this accounts.

Anyway I think that a more formal way (a smart contract) that enforces/incentivizes decentralization is really needed, just like the mentioned Alan’s proposal or equivalent. BUT probably this will need to be set up at the protocol level and implies a serious change and auditing to the pool factory code, so it will be difficult to move fast with such a change.

So, as a short term solution it may be feasible, and as Alan mentioned it may introduce Chunk producers to other (funded) projects in the ecosystem and get some attention (and tokens

What we can do to run process?

Thanks for your proposal.

In general, I agree with the premise of decentralising the network by spreading out lockup accounts. A few more things that I think should be taken into account to maximise the impact of the conversation:

Relationship between Lockup Accounts and Validators

Liquid Staking is the Way
I am obviously biased because I have been involved with Meta Pool since the early days. However, as we continue to read more first hand accounts from validators, etc. it seems pretty clear that the easiest and most straightforward solution would be to increase the stake to Liquid Staking.

NEAR has an extremely low % of stake through liquid staking. This to me just reflect the nature of the bulk of the NEAR being held by a handful of accounts and a handful of validators. Just under 15m NEAR are currently delegated across all three LS providers out of 489m (this also raises separate questions about the economic viability of LS providers themselves).

I am a stronger advocate of shifting the existing stake in a way that can be distributed dynamically, rewarding best performers, over complex processes where someone has to be kingmaker (choose a handful of new validators over the other 180+). I am also a strong believer that this would require both posts such as this one, seeking to engage lockups accounts, but also outreach to community. Explain why staking with small validators or liquid staking is important, etc.