Hey team! Let me share with you Discord report of this week! First of all i want to tell you that I am delighted to have completed my first month as a moderator at NEAR! It has been incredible so far and i want to thank the whole staff for making me so comfortable!
Well let´s get straight to bussines, i want to tell you that we have settled the welcome message that i mentioned in the last report, at first this bot was sending it in the “welcome” channel in discord, but then we decided that it would be better if the bot sent a private message, so we did that and it worked well! It´s working perfectly and it made the new members participate more!

Discord Metrics analysis
This week was AWESOME! More than 600 people joined the server, and i say people beacuse almost none of them were bots! This is a great step, NEAR keeps growing and the community keeps becoming stronger! This chart show us the quantity of new members per day. As you can see, there is no data provided by discord for the 20th and 21st, but i counted the new members for this days myself and they were 106 new members! That´s a lot and i am really happy for this.

image931×377 9.33 KB
New members who participated in the server (voice or chat) went pretty well! Always more than 15% of them participated, during this month that i have been monitoring this server stat has been similar, so anyone suggest how can i increase this number? Any advice? I´ll appreciate it!

image917×374 23.9 KB
In addition we had an average of almost 6 messages per comunicator, which is really good and it seems that it keeps increasing day by day!

To conclude with this report, lets talk about server leavers, this amount increased compared with the last week, with an average of 25 leavers per day. Which is not a bad thing at all, but it was worst than last week and i want all of you to know that! 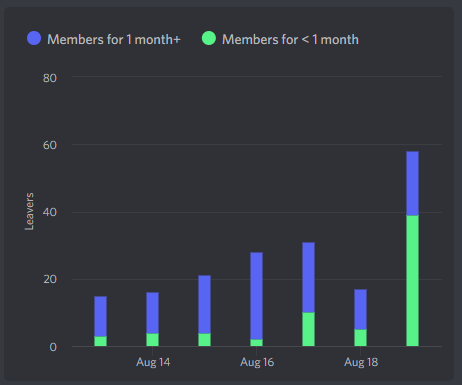 Finally i want to mention that i´ve made a research and i found a bot called “ServerCaptcha-bot”, this bot makes the new members to complete a captcha in order to confirm that they are not bots, and i thought it would be useful in discord! Let me know what you think and if you already know this bot!
Well folks, that´s all for this week´s report, have a good weekend!
Your friend,
Benz_Near