Ref-Finance - Native DEX on NEAR Blockchain
The Marma J Foundation has LP on ref in various pools:

This liquidity is currently being managed by marmaj.near with the goal of the marmaj DAO eventually managing these assets

sputnikDAO contracts still need to be audited before we call complex functions with high value attached).

MetaPool - Liquid Stakign Solution on NEAR
The Marma J Foundation has deposited 1000 NEAR into Metapool.

The marmaj.near also has >10k NEAR staking through delegation to various validators. This NEAR is considered in “long term lockup” and there is no plan to withdraw these funds in the short/medium term. (to be used for eventual marmaj validator)

The Marma J Foundation contributed to the MetaBUDL Hackathon by sponsoring an Open Challenge. Video Overview of Challenge: Marma J Guides: MetaBUDL Challenge Overview There have been a few developers in the community that have been attempting the bounty over the past couple of weeks, and we believe that we have a working submission. The Github Repo: https://github.com/QuicSwap/near-multicall SptunkinDAOv2 Call (testnet): SputnikDAO 2 Transaction on Explorer (testnet): NEAR Explorer | Tran…

Using the above “multicall” contract, we will attempt to manage our DAO treasury (to swap from $NEAR → $marmaj)

deposit - 10.5 (extra NEAR can be redeemed from the marmaj.multicall.near contract - need to query contract)

Data is too large for a ledger.

There is now a new pair on ref.finance for the $marmaj token

There is also a “just-for-fun” pair for marmaj <-> paras

For the marmaj <-> stNEAR pair, since stNEAR tracks closely to the price of NEAR (but with additional staking rewards), it would be beneficial to both the marmaj and general NEAR community to add additional LP.

To kick off utility for the pool, 2119 marmaj is to be added to the liquidity pool to support the community. A little over 3000 stNEAR will also be contributed to the pool from marmaj.near. 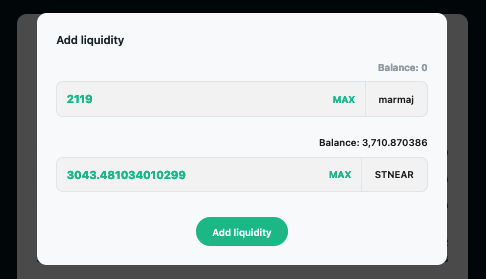 Chole , good work around the MJF…!

There is still ~355 stNEAR balance in ref for marmaj.near. 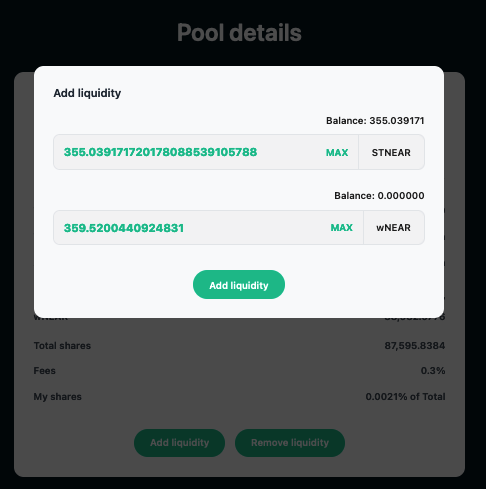 The REF tokens earned from this pair will (in part) be used to purchace $marmaj tokens on the marmaj <-> REF pair to then be deposited back to the marmaj DAO (marmaj.sputnik-dao.near) on a weekly basis. (~7 $marmaj a week)

While this experiment was educational, it does not seem like it was economically viable to support the marmaj DAO. For that reason, I will be unwinding the stNEAR <-> marmaj pair on ref.finance: Ref Finance.

The marmaj tokens from the pool will be sent back to the DAO address for now. The stNEAR will be used for other purposes to support the Marma J Foundation.

We will watch the pool to see if we will keep the LP level here or completely close the pool.