Reimagining the NEAR Guilds Program

The NEAR Guilds Program started as an idea to help community contributors connect and collaborate by way of incentivizing meetup groups within the NEAR community and has over the months evolved into one of the most impactful Guilds Programs in Web-3 today. The NEAR ecosystem has grown by leaps and bounds and so has our Guilds Program - adding tremendous strength to our community infrastructure and playing a pivotal role in giving shape to a grand vision to our collective efforts. Guilds have been some of the biggest drivers of visibility for the community and have been successful in getting a diversity of voices advocating for them, apart from also being an entry point for some of the most high impact community members over time. It is now time to think collectively about Guilds 2.0 as we build a community infrastructure for the future!

Why change the existing structure? We need to reduce and eventually remove NEAR Foundation’s hands-on involvement in the Guilds program by transferring the governance of the program to the community and address the following challenges or pain points we have encountered over the months:

What next? The proposed restructuring exercise aims to gradually remove the NEAR Foundation from hands-on involvement in Guilds program by facilitating the gradual transfer of governance of the program to the community - essentially transitioning from a “participatory support” role to “collaborative facilitation” vis-à-vis various community-oriented initiatives. Based on feedback by ecosystem stakeholders on many important forum discussions over the last few months, which clearly indicate a need to overhaul certain components of the community machinery, we are consolidating an ambitious plan that will help us build a launchpad for self-sustaining Guilds.

Roll-out of the new program: The new Guilds structure will be rolled out in phases to facilitate smooth transition from the existing structure for all the stakeholders involved by giving sufficient time for feedback, discussion and experimentation. We would like to facilitate a Governance Pilot as we shift gears by involving community members to drive the initiative forward. The roll-out will include the following steps:

With more than 130 Guilds in our ecosystem, it would be unjustifiable if we don’t have a scalable program to complement this growth of interest in contribution.

Need to build a transparent, efficient pipeline for funding to enable any and all Guilds to access Community funds as long as they participate in governance.

We already have Community DAO which should play a pivotal role in making decisions in all DAO’s verticals (Marketing, Ecosystem, etc) and when NF is reviewing grants for someone.

Just wondering why information about grants is still hidden from Near Community members if most of the grantees build apps for Community.

This will be a really great step at seeing Guilds evolve. For example its over a year since the NPK Guild got onboarded and been basically a marketing guild. We have to fully rely on the Near Foundation and marketing DAO for all our activities.

If a system will bring about how we can push for autonomy then it would be the most amazing thing towards a more decentralised ecosystem.

when NF is reviewing grants for someone.

I disagreed with a couple of NF decisions when they approved grants for projects like Aurora Shiba (if I got the right information) and thousands of people lost their money. We could prevent it if ask Community, before making a decision. Furthermore, it will increase the level of awareness about new projects in the Near community.

About transparency - our community is already doing work transparently (look at the Marketing DAO work table, 100% reports received), but I can’t say the same about NF people (only they didn’t post any reposts to Marketing DAO).

How does NF wants to build a transparent community if they
have never welcomed it and prefer internal not public decisions?

Zero information about grants, about opportunities for Near Community, many hidden DAO’s, despite of source of money is Community treasure (like business dao, 0 reports from October), etc.

NF proposed new Community driven DAO’s, got support from Community, but again made an internal decision and changed their mind at the last moment.

Now you wanna try another experiment.

Bringing things to a more centralized manner would really be an off. For example, thee KYC system for making payments now has really defeated the aim of Bitcoin and Blockchain. It was suppose to be a permissionless, peer to peer system built on Trust. Bringing on KYC was making things more centralised.

We already have Community DAO which should play pivotal role in making decisions in all DAO’s verticals (Marketing, Ecosystem, etc) and when NF is reviewing grants for someone.

How effective has this been so far?

Bringing things to a more centralized manner would really be an off. For example, thee KYC system for making payments now has really defeated the aim of Bitcoin and Blockchain. It was suppose to be a permissionless, peer to peer system built on Trust. Bringing on KYC was making things more centralised.

Any funds that will ever touch traditional banking or on/offramps have to do KYC/AML checks regardless of the context and the NEAR ecosystem funds are def covered by that.

How effective has this been so far?

We just started building (rebooting) a decentralized Community DAO. I believe the DAO will be one place and source for all decisions. Marketing, Ecosystem DAOs will merge with Community DAO.

But as far as the NEAR ecosystem is concerned it’s no Traditional banking or financial institution. Blockchain and Crypto came about to move away from the hectic processes poised by traditional financial systems. And if we keep going back there I don’t think “Satoshi” will be proud of what he has created.

Does this mean that if a Guild is not planning on interfacing it’s recieved tokens with the traditional banking infra, then no KYC should be needed?

I see only one effective decentralized DAO (structure) when we have councils -representatives from all active DAOs and guilds (re-election every 6-months). Any Community member can bring ideas/proposals to them and get approval from councils (consensus 30-35%). 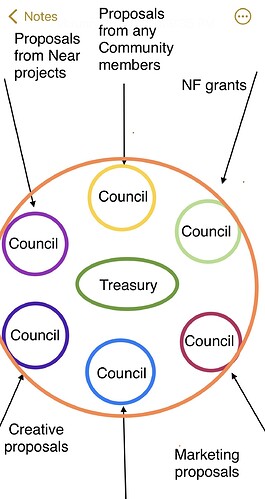 Not doing KYC puts whichever entity is giving away the tokens (or its owners) at unlimited liability, so the NF can’t give meaningful amounts of tokens to any entity that hasn’t been KYC/KYB’d. If the receiving entity wants to put itself at risk by not KYCing its own payments, that’s their issue but it’s serious stuff.

Guilds never became self-sufficient enough to stand on their own and continue to rely on operationally-intensive handouts from the NEAR Foundation to continue their day-to-day operations, which has kept the Foundation involved in community-driven programs.

About this, I’m not entirely sure that most Guilds do know that they’d have to be self-sustaining at some point. So it would be good if the revamp of the guild program explicitly make it clear that Guilds would have to run independently on their own without any assistance (mostly financial) from the NF. Maybe only then we’re going to achieve more with the guilds program.

Does this mean that if a Guild is not planning on interfacing it’s recieved tokens with the traditional banking infra, then no KYC should be needed?

I don’t think there’s a definite way to say whether or not a guild would interact with traditional banking or fiat on/off ramps with received tokens- even though they might not do it directly, it still counts.

This is well said
It couldn’t have been put better.

I support this. Thank you for letting all community members to contribute. I think we can help shape guild formations for the better with methods that are more more effective without compromising decentralization by setting up neutral monitoring mechanisms.

I believe we’re having hard time keeping track of what exactly is going on around Regional Guilds and can’t efficiently monitor and collect feedback about them since most don’t speak English.

imo all Local/Regional guilds should:

-Work with qualified people who have crypto knowledge, highly familiar with Near Ecosystem and have English(a little should do it) rather than friends and relatives. Community moderators should be chosen from those most enthusiast members.

a picture: in Persian/Turkish Community Chat if someone’s asking about how to add liqudity on ref for X-Y token you cannot/shouldn’t tell him to go Ref Finance Official chat and ask there since he probably doesn’t have enough English therefore asking it on local community chat

-High quality written/video Local Language content must be there at leash on basic stuff like: how to set up a wallet, understand explorer, opportunities for developers/learners, Individual contributors, popular de-fi projects, NFT marketplaces etc.

-Maintain fair distribution of Near Foundation/the Communtiy resources on a merit basis. The dao should not be less than 5 members. They should encourage new members contributors to join the governance forum and then finally to the dao if they are seen enthusiast about it. ( Monthly marketing reports may seem neat but you can never be sure if the funds have been spent fairly unless you live in that country and speak that language)

-Keep in touch with other local crypto communities not just with “close influencer friends”. Use these connections to help shill important marketing

-Be open for any creative/more effective proposals coming from the community and be willing to replace it with their own. Announce and pin it on community channels and encourage all community members to join the governance forum.

-Be creative about channel/community events. They may be inspired by our original channel events and organize similar/better ones

-Have love for the community and, avoid banning members on small disagreements.

-Simply: be a sherpa not a boss

They can 24/7 contact and ask for support from us:

Channel Ops. @Benz_Near @Kv9990 @bailey12 @GeorgePro1 @Emmyyo @rahulgoel007 for questions about moreration, organizing events, basic technical stuff
and
Guild Ops. @Jloc @jiten123321 @simeon4real @FritzWorm
for in depth collabration with other Near Guilds and all other issues regarding Near Guilds
*Near Concierge Team

I have to quote you Sherpa Chief haha =) This is indeed a nice quote, I will use it

Simply be a sherpa not a boss

@nacho.near @Alecaseg @jeph check this out, more changes, and something about what I told you on how to help your communities.

@LuisAponte99 @Mineriavirtual @rosamaria you should take a look on this too.

As a member of this community for quite some times now, I did see the rise and fall of guilds so I would like to conduct some ideas:

Hence, here is the solution I suggest for above problems:

I do believe if guild can sustain by themselves then our Ecosystem growth will be much healthier than ever before.

A starter funding pack up to 3 months and after 3 months, the guild will have to take on step on their own without supporting of any fund from NF.

Ultimately, I’d like to see a model that would support all Guilds. For instance ~ A guild like the NEAR stars guilds that sources for YouTube and then pay them for advertising. How do Guilds like this get self-sustained since they don’t earn “any” revenue? It’s not just NEAR star guilds - there are others.

Like you said, there are Guilds that got closed down when their “usual” funding was put up for debate.

It’s time we change the narrative.

Thanks for the exposure @KriptoRaptor.

Guild Ops team is here to guide and help all guild members despite the ecosystem structure.

I agree with what you are proposing here. I personally have focused on leading guilds into being self-sufficient.

NF of course, should support guilds but to a certain extent.