[PROPOSAL] Promote NEAR Ecosystem in Brazil

I’m Regy Andrade, Brazilian entrepreuner/builder (https://www.regy.xyz), moderator at DeFi Nation. I’m in Near community a few months, but in crypto since 2017. I’ll love help the community, so if I can help in anything feel free to get in touch!

The purpose of this proposal is to create an exclusive section called “NEAR.Agora” in the Decentralize portal to share News, Articles and Education/Evangelist content) about the NEAR Ecosystem in Latin America (Brazilian Portuguese).

The content will be focused on Tech, Business and Real World Uses aspects. The idea is using an “Onboarding Driven Process” in the website and content architecture; to develop the readers to understand about Near Ecosystem, “How can this help them” and a Call to Action (in a flow to create a Wallet or use some Dapp, for example).

Secondary desired outcome, is to give visibility to the Brazilian community members that already produce content and videos about Near (and that was shared in Web3dev, Tabnews and other forums), doing an intro for this content in our portal, backlinking to original (after curating and tagging) - and sharing it in our channels, helping to turn every person into a micro-influencer. I believe with that way, we can help coordinate to centralize the decentralized energy to create a “critical mass” and help develop the brazilian community (whos also impact not only Brazil but other countries like Mozambique, Angola and even Portugal ).

The portal was created in 2017 under the Bitse brand name, initially, the portal was focused on Bitcoin but the times have changed since the beginning and now we changed to Decentralize. The present content guide is focused on Web3, DeFi, NFT, Metaverse, and DAOs. Today we have +30K subscribers and +40K visitors/monthly (average).
Portal: https://decentralize.com.br
Youtube: O QUE É TOKENIZAÇÃO DE ATIVOS - YouTube
Instagram: Login • Instagram

How ​​many crypto owners in Brazil?
It is estimated that over 10 million people, 4.9% of Brazil’s total population, currently own cryptocurrency.

400% growth compared to the previous year.

Bitcoin Market reached 3.2 million customers in 2021, of which 1.1 million were added last year, the company told CoinDesk recently, adding that its trading volume reached $7.1 billion in 2021."

Source: Why Brazil Is the Big Latin American Bet for Global Crypto Exchanges

Others Facts (Just to mention)

According to Statista, there were 2.7 billion gamers in 2020 globally. Other reports show 260 million out of them to be from Latin America. These gamers mostly belong to Mexico gaming, Brazil gaming, and Chile gaming other than South America game areas.

No Language Barrier: People shied off from online gaming if they did not know English well. But now, they are moving towards online gaming due to more Portuguese and Spanish-speaking gamers.

NFT games have several virtues. They offer users a unique gaming experience by allowing them to earn cryptocurrencies while playing. But, in addition, they can be run from any browser without the need for high-end computers or phones.

This is one of the factors that has contributed to making these games more popular, especially in developing countries. It also explains why in the first half of 2021, the [global trade](https://www.nasdaq.com/articles/visa-buys-a-cryptopunk-nft-as-trading-volume-hits-all-time -high-2021-08-25) volume of NFT reached $2.5 billion.

Blockchain games have more and more Brazilian advocates as they seek new users to join the industry in the “gaming-is growing and being for an important role in expansion” model, revealed the report [Blockchain User Behavior - Games Perspective](https:/ /dappradar.com/blog/blockchain-user-behavior-report-games-perspective). The United States is at the forefront, with 121,000 active users, Brazil appears in sixth place, just behind the Philippines, China, Vietnam and Indonesia. Brazil also stands out in the number of players who interacted with two of the three most popular games in the blockchain gaming industry: Axie Infinity and Splinterlands. The country is among the top 5 in number of interactions with the two dApps, ranking fourth in both rankings.

It is worth noting that Brazilians were fundamental for the growth of Splinterlands, whose number of users grew 554% in August, compared to the previous month. There were 187,000 active users, on average, daily. This growth remains constant and today, there are already more than 272,000 players a day interacting with the Splinterlands dApp.

Note: The general idea is to connect the actions and organize them to create a unified flow to promote the NEAR, get people to participate in the community, and learn about the ecosystem and how to use it.

The proposal is Distribute/Coverage of the NEAR Ecosystem (all material will act as a funnel to lead people to the Community (Brazilian Portuguese), translated content, ie, NEAR University, News, Important Articles and etc), and nutrition to generate engagement (campaigns, exclusive contents, influencers partnerships, FAQ and How to start/Help, Remove Objections, and so), and the Call to Action to incentive for the readers to test and use Near and the Dapps of the ecosystem.

Thanks for your attention and I’m open to receive feedbacks so please, feel free to ask any questions!

Thanks for your proposal. Actually, we have great contributors who will represent Brazil in Lisbon. So, it’s no from me, but I will be happy to see you and your team on NearCon.

Ps: Near is a blockchain 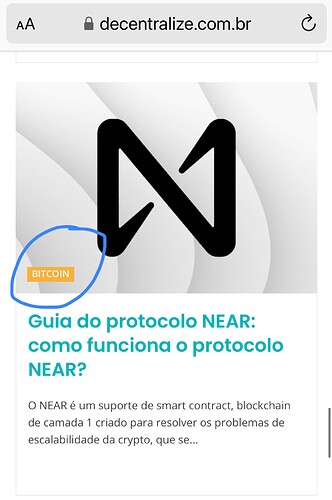 Hi @Dacha ! Thanks for you reply.

We already started organizing the Portal to insert the “Near.Agora” section and the post showed wrongly (its fixed now), until Saturday the section will be 100% finished; also the content writer already started putting the content (we’ve hired a content translator 20 Near’s posts for this month - not asking for refund, just to mention).

Please, note that the important focus of the proposal is the Decentralize content to help spread Near in Brazil, Nearcon is just an append of it (I understand the context, so many people applying to go there and I can agree with prioritizing, so I’ll remove Nearcon participation of the proposal).

I’ll appreciate if you can re-evaluate the proposal and helping us to keep with our work!

Thanks for your proposal Remy.

Brazil is a huge country with equally big potential so I am interested in any legitimate initiatives to grow NEAR ecosystem there. Few notes and comments -

We usually process proposals on a monthly basis, specially for new applicants.

I am willing to support this proposal on a monthly basis as we review and work on the things I’ve mentioned above. Please update your proposal to monthly request if this is still suitable for you and you’d like to proceed. Note that you would still need support from 2 more council members.

Can you adjust this proposal for a single month rather than quarterly?

We would like to ease into this type of project especially given you’re new to the ecosystem. If you adjust it to the monthly budget, you’ve got my approval.

Thanks for your replies @satojandro, @klint, and @Dacha !

I talked with the team and we reorganized for Monthly basis proposal to fit your suggestion; Also, using the NEARWEEK as a base in the content translation (per day basis).

Our traffic generation strategy is basically Organic (Ads in crypto is a serious topic and we’ll work carefully to deliver the content in the best practices possible): all articles will include SEO optimization, focusing on easy-digest and relevancy, backlink building management (internal and via Blogger Outreach), distributed weekly to our e-mail subscribers; distributed also to my book’s subscribers (Developers) list; shared in our social channels (in this case we’ll boost with ads when possible) and via Partners / Manually to related groups and communities.

I’ve talked weeks ago with @Hack-a-Chain about doing Hackathons in Florianopolis, Sao Paulo and so; They will participate in Nearcon, so I’m going to talk to them again to collaborate to cover the event and generate content… I’ll talk with other friends like @osc.near that will attend also.

PS: I’m organizing a mini-hackathon with 30 students (developers) in Santos city (near Sao Paulo), on 27/Aug. The average age is 14-17 so the #1 block will be explaining about Near ecosystem and how to start developing in and the second block will be coding. I think that will be a nice experience for them and interesting for sharing in the portal.

I appreciate it if we can approve this proposal and keep working to help build the Brazilian community.

Hi @Regy – thanks for the proposal and for answering the questions from the council and being open to feedback/adjustments to this.

Are you able to share who the writers/content creators are for original content? In general, I am growing and more interested in supporting projects that have a fact-checking or mechanism for accuracy in mind.

If you can let me know about the above, I’d be happy to support the updated proposal for a month to see how it goes.

We want to work with him, and support his initiatives.

We have been discussing collaboration and development of products on top of NEAR Protocol.

As well, Hackathons, Meetups, Education, and more things in order to grow the NEAR Ecosystem in Brazil.

Hi @Dacha I am in Lisbon, and actively working on organizing side events with different projects during NEARCON.

ofc NEAR is a Blockchain!!! As the it mention on the text. a Layer 1 with Smart Contracts. 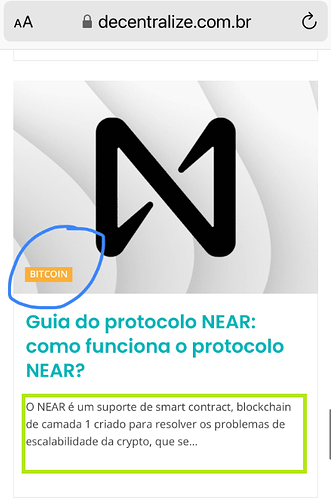 Great job @Regy you have been doing so much work for NEAR Protocol without any obligation.

Let’s do a call soon.

Hello @so608! Thanks for your response! I understand your concern and we share the same point; Since we started writing content on Regulation and related topics (for example, we are the first in Brazil to write about the use of Blockchain solutions for Logistics, Foreign Trade and International Remittances), we have created a process for content approvals. We use a Trello Kanban (Inventory, ToDo, Doing, Review, Approved, Sharing) and all original content is reviewed by an SEO Analyst, a Developer (technical review) and an experienced Legal Advisor in the context of Crypto, before being published.

We recently expanded our partnership with the Legal team and they started writing as well.

Thanks for your words @osc.near , I appreciate your support and we definitely need to increase our collaboration to spread the Near!

PS: I am an Indie Developer/Builder, my focus is to build Daoster.xyz/dao, but I truly believe that the education approach is the best way to evangelize and spread Crypto to the masses, so I believe a lot and keep working towards maintain and grow the Decentralize portal. I feel the same way about the Near community and the support from @marketingdao-council will be very important to continue sharing the Near ecosystem here in Brazil.