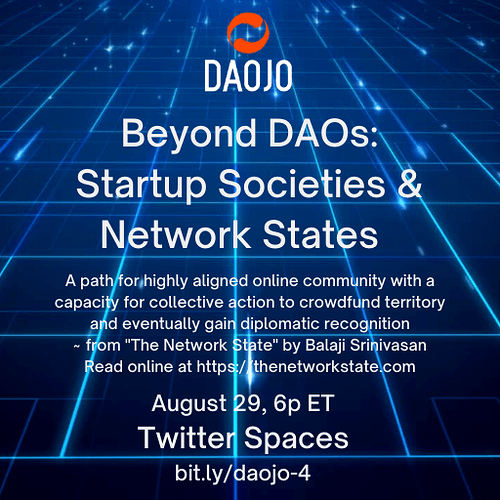 DAOjo Flyers-2512×512 230 KB
Join us in the DAOjo this Monday August 29th at 6p ET as we explore the emerging concept of Network States. Network State is a term coined by Balaji Srinivasan in the new book, “The Network State”.

The book explains how to build the successor to the nation state, a concept they call the network state. It starts up similar to a DAO and could be a DAO in early stages but with the aspiration to crowdfund land around the world and eventually gain diplomatic recognition.

Here is an excerpt from the book explaining Network States in one sentence. (You can read the entire book for FREE online at https://thenetworkstate.com.)

The Network State in One Sentence

In one informal sentence:

A network state is a highly aligned online community with a capacity for collective action that crowdfunds territory around the world and eventually gains diplomatic recognition from pre-existing states.

Here’s a more complex definition that extends that concept and pre-emptively covers many edge cases:

A network state is a social network with a moral innovation, a sense of national consciousness, a recognized founder, a capacity for collective action, an in-person level of civility, an integrated cryptocurrency, a consensual government limited by a social smart contract, an archipelago of crowdfunded physical territories, a virtual capital, and an on-chain census that proves a large enough population, income, and real-estate footprint to attain a measure of diplomatic recognition.

OK, that’s a mouthful! It’s lengthy because there are many internet phenomena that share some but not all of the properties of a network state. For example, neither Bitcoin nor Facebook nor a DAO is a network state, because each lacks certain qualities – like diplomatic recognition – which are core to anything we’d think of as the next version of the nation state.

Last Episode
This past Monday, Jordan Gray @starpause joined us in the DAOjo to talk about NEAR, DAOs, and AstroDAO. Here is the link to the replay of Jordan in the DAOjo.

I will be hosting along with @Elamental.