Another year in all parts of the world, and like every year of the tiger, full of energy. We need not have received any news that war is approaching and lives are lost, people losing their homes and having their lives decided by other people. It’s not how it should be. All this is very sad. And we want to collaborate in any way we can. So we founded DAOnation to share non-profit projects with volunteer work to raise funds for those in need. And everyone needs support. Creators with their work help to publicize the projects, the projects support them to keep creating and growing, collectors invest in a way that their funds are destined for a cause, able to save innocent lives.

In January, we started activities aimed at structuring and opening ways for creators to collaborate with some essential tools of the ecosystem, such as NEARHUB, and looking for ways to bring this generated content to be used by the community, as a gateway, with this material under license. CC BY 3.0 remix, hosted in the Creative Commons folder.

And we made the first partnership with Workship, developing rooms to be used by NEARHUB, 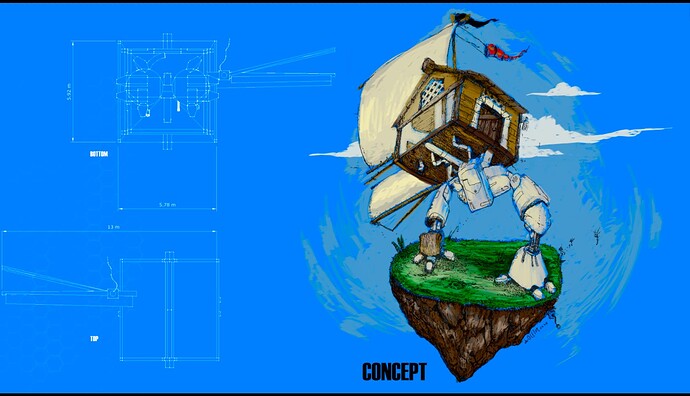 We also brought material that carries a somewhat hidden Brazilian identity but is present in the daily life of many Brazilians, who get solid values ​​such as Carranca de São Francisco (Carrancas do São Francisco – História de Alagoas )
An icon present in the population’s culture from the São Francisco River was used on the bow of boats as an adornment to scare away evil spirits and bring good luck.

Another element is the Sword of Saint George or Sword of Ogum (Sansevieria - Wikipedia), which is attributed to spiritual cleansing and protection and has a high carbon absorption power. Originally from Africa, this plant was quickly spread across the country due to its simple handling.

Another important icon is the Araucaria, a native tree species, essential and endangered. Araucaria was considered by several indigenous tribes as a plant of power, worshiped as a deity by the Puris (Puris no Vale do Paraíba – Wikipédia, a enciclopédia livre) first inhabitants of the Paraíba Valley, Atlantic Forest region today almost all extinct. There are legends about the mystical powers of the Christians formed at the base of the Araucarias, where the Indians used a spiritual source (popular accounts)

The Cachara ( Cachara – Wikipédia, a enciclopédia livre ) is a species of catfish, very common in Brazil. It survives for a long time out of the water, appreciated by fishers for being a vertebrate fish of beautiful coloring, brindle. It is called in several places by the fish that cries.

We created a website system developed to be simple to manage to use in different applications. However, we need particular elements that we ask the community to develop.

Our page is under development and will soon be online.

[PROPOSAL] Creation of The Clan Landing Page The Clan Guild

[topimagemtheclanforum] Hi there! We want to create a landing page for The Clan Guild. It will be a single page site, that will centralize all informations and links of The Clan easing the access to the whole community to our projects, opportunities and news. This site will be produced in a collaborative way with all The Clan Devs of the Workship Studio. (link) and the reward will be split betwwen them. Budget asked : 400 USD Servidor Pinata : 20 USD month - 12 months plan - 240 USD Domain…

Seeking a more significant connection of The Clan’s values ​​with the NEAR community, we created a bounty designed to work with a mixed dynamic where we present a problem, people offer their proposal, and we develop work together. The first was a font created for the clan, which is under development and will soon be available to the community.

[BOUNTY - CLOSED] Font Creation for The Clan The Clan Guild

Amid new adaptations from the end of 2021, the agendas merged. In February, other activities always focused on creative materials that everyone can use or develop educational support, such as tutorials. We made The Clan’s first tutorial, focused on Pixel Art development, designed to contribute to projects like NEAR Lands. In this tutorial, the first Motion Graphics was applied, [closed] Motion Graphic Videos Creation for NEAR - #3 by duOCELOT
shared to the community via CC FOLDER Video - Google Drive
Others are under development.

Other logos were developed by the same designer who collaborated with The Clan and presented the concept of our logo. A transcontinental process, Nigeria - Brazil
[ CLOSED] - Logo Development for the Guild DAOs an exceptional work

In the same logic, the fonts are being developed by the community

[photo_2022-01-07_22-19-44] we want to develop more font type related to the values and visual id of each one of the DAOs. theWORKSHIP DAO NEAR Nature Children of the DAO each font will be available as CC 3.0 remix license and will be free to use and storage at the CC drive folder for each DAO font we will give as reward 200 usd! If you are interested please put in the comments a sample of your work! We will choose and give further instructions! Any doubt please contact us. The Clan G…

Following the video development framework and tutorials, we focus on the clan’s future activities for this format. First, we are reformulating the Perspective Workshop project for this format, generating material for the classes, which are still waiting.

More Information soon. We are gathering data from the event supported by QUALDAO members, with the first real-life interaction using NFTs and NEAR at the event in Rio de Janeiro. Our next step is to adapt this data to a more straightforward onboarding structure and create a mechanism for the direct use of NEAR tokens. [ REPORT ] Jan 2022 - Budget for blockchain/events interactions V1 - QualDAO - TheClanGuild

Councils of The Clan