Following Near foundation and Pagoda’s 2023 goal to reach “20% month- over-month growth in Monthly Active Developers (MADs)”. Dapps Over Apps is a project tagged with the mission to onboard developers and tech enthusiast to web 3 will make NF & Pagoda’s goal attainable.

With over 18 months of experience working with the Near blockchain, I have become very familiar with the value of decentralization and how Near Protocol is one of the best options for developers. I am currently part of a DAPP development project and I have found the ease that the near blockchain provides in comparison to others; hence I am specifically motivated to share this with other developers.

The promises of decentralization cannot be achieved without the togetherness of everyone.

Thus, the reason for this movement “Dapps over Apps” which is aimed at connecting the right developers to the ecosystem.

I plan to kick start this movement with an event themed Dapps over Apps. This event will focus on the following:

• Onboard 100 - 200 developers, tech savvy and builders to the Near ecosystem.

• Onboard 100 attendees to communities that support builders of decentralized applications. The like of Human guild, sakore, Developers Dao, etc.

• Guide 20 to 50 developers, tech savvy and prospective builders on how to pivot their way in launching their Dapps on Near blockchain.

• Grow a community for Dapps over Apps to 200 members after the event.

Justification: I have hosted series of events within the Near Ecosystem both virtual and in person and I have had an outpouring attendance, value creation and have attained all key deliverables. Link to some of the reports below: 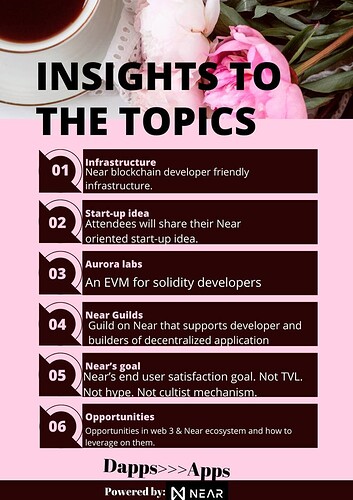 • Andres Dominguez: A Near certified developer with several years of experience in blockchain development and building of decentralized applications. Some projects include Near P2P, Econear.in, etc.

• Quivira – Founder of Institute Ophir; a community for blockchain development. He is also a blockchain lead developer with experience in solidity, token deployment and technical writing.

• Loozr team: A community-driven muisc platform built on Near that allows everyone to listen2earn per second, trade, invest in artist & music tokens.

• @Hawwal : Founder of blaqstereo dao; a community of designers, illustrators, artists, etc. He is conversant with web 3 and the Near ecosystem.

• Customized tee-shirts & swag pack - $500: Customized shirts will be given to workers, speakers and first 50 attendees.

• Incentive for organizer - $500: An average of 2 – 5 hours per day will be dedicated to the planning of this event.

• Online & Physical awareness - $300: This is an integral part to the success of this event. Awareness will be made via posters, campus rallies, word of mouth and social media ad.

• Video coverage & photography - $350: Recorded clips will be used after the event to educate and help newbies navigate their building journey on Near.

This video will strengthen the impact of this event as it will be across various Near social channels for visibility and public awareness of Near blockchain infrastructure that supports all kinds of developers.

• Best Start-up idea - $300: This will be awarded to the top 3 best Near oriented start up idea pitched at the event.

I have filled marketing dao form with all necessary information. I look forward to the approval of this project.

Hi @Supercoolkay – thanks for the proposal and filling out the form. There are a couple of things I want to ask about this proposal and then a few circumstances that, from my perspective, are likely to affect funding of this at this time.

Given the above questions and concerns, I am not ready to support the proposal at this time, but will continue to monitor and view responses from the community and council and hope we can get some additional clarity on our role with events and regional activities soon. Thanks!